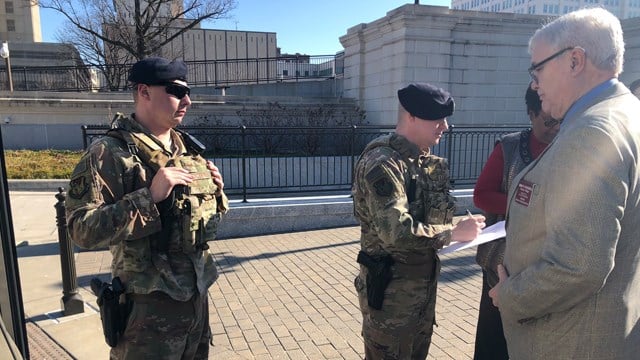 KS House Democrats boarding a bus for Forbes Field and a DHS security briefing. The House Speaker, @RonRyckman says the AG and the Adjutant General have been asking for this briefing since before Christmas. #ksleg doesn’t know what the briefing is about specifically. #kakenews pic.twitter.com/cMkUuhvnUp

Reporters and staffers were not allowed on the buses before they left the Statehouse. Deputy Attorney General Jay Scott Emler, a former state Senate majority leader, said in a letter Tuesday to the Kansas House speaker that the briefings should be given in closed party caucuses, which are allowed under the state’s open meetings law.

Emler’s letter said only that the briefings concerned issues that legislators “may encounter in the course of their official duties.” Lawmakers knew little about the content ahead of time.

“We’re anticipating it’s something to do with cybersecurity, but we don’t know,” House Speaker Ron Ryckman Jr., a Kansas City-area Republican, told reporters ahead of the GOP briefing.

Senate Minority Leader Anthony Hensley, a Topeka Democrat and the Legislature’s longest-serving member, said he cannot recall a similar briefing in his 44 years as a lawmaker. Senators expect their DHS briefings by next week.