President Trump says Iran appears to be ‘standing down’ after strike 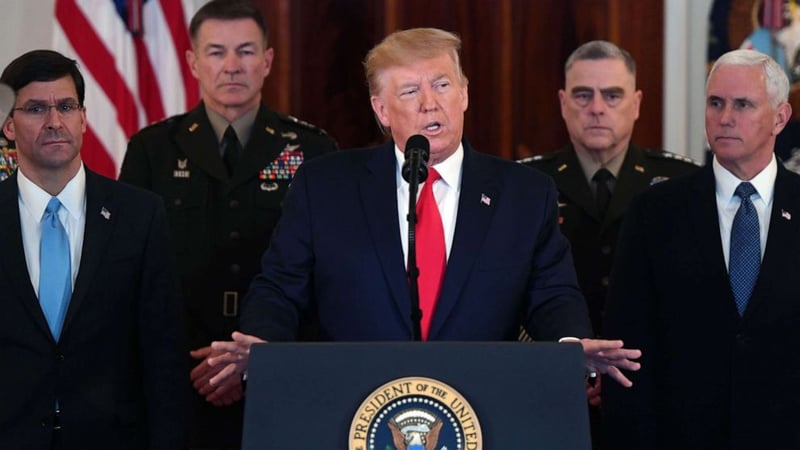 President Donald Trump said Wednesday that Iran appears to be “standing down” and said no Americans or Iraqis were harmed in Iran’s Tuesday ballistic missile strike on two Iraqi bases housing U.S. troops.

Speaking from the foyer of the White House, Trump announced that the U.S. will immediately place new sanctions on Iran “until Iran changes its behavior.” He defended his targeted killing last week of Gen. Qassem Soleimani, the head of Iran’s elite Quds Force. He added that Americans should be “extremely grateful and happy” with the outcome.

Trump reiterated his position that “Iran will never be allowed to have a nuclear weapon” and called for new nuclear negotiations to replace the 2015 nuclear deal from which he withdrew the U.S.

Trump also announced he would ask NATO to become “much more involved in the Middle East process.”

President Trump remarks amid showdown with I

President Donald Trump faces one of the greatest tests of his presidency after Iran launched ballistic missiles at Iraqi bases housing U.S. troops and plans to address the nation on Wednesday. Iran’s attack was its most brazen direct assault on America since the 1979 seizing of the U.S. Embassy in Tehran.

The strikes pushed Tehran and Washington perilously close to war and put the world’s attention on Trump as he weighs whether to respond with more military force. The Republican president huddled with his national security advisers on Tuesday night but offered no immediate indication of whether he would retaliate. “All is well!” he said in a tweet.

The White House said Trump plans to address the nation at 10 a.m. CST Wednesday. Watch on KAKE or click here.

The Iranian strikes came days after Trump authorized the targeted killing of Gen. Qassem Soleimani, the head of Iran’s elite Quds Force. Iran had pledged to retaliate, though its actions did not appear to result in any American casualties, according to a U.S. official. The missiles targeted two bases — one in the northern Iraqi city in Irbil and the other at Ain al-Asad in western Iraq.

A lack of U.S. casualties could give Trump an opening to de-escalate the mounting tensions with Iran and pull the nation back from the brink of war. Trump, who is seeking reelection at the end of the year, campaigned for president on a promise to keep the United States from engaging in “endless war.”

Still, Trump’s rhetoric in recent days has been menacing. Just hours before Tuesday’s missile strikes, the president told reporters in the Oval Office: “If Iran does anything that they shouldn’t be doing, they’re going to be suffering the consequences, and very strongly.”

Democrats called on Trump avoid a military escalation with Iran.

Rep. Eliot Engel, D-N.Y., the chairman of the House Foreign Affairs Committee, said the administration needs to quickly “extricate us from what could lead into a full-fledged war with terrible casualties.” Engel said he feared the situation ”spirals out of control.”

The fallout for Trump’s order to kill Soleimani has been swift.

Iran announced that it would no longer be bound by the 2015 nuclear agreement and vowed to retaliate against the U.S., its allies and American interests. Iraq’s parliament also voted to expel U.S. troops from Iraq, which would undermine efforts to fight Islamic State militants in the region and strengthen Iran’s influence in the Mideast.

The counterattack by Iran came as Trump and his top advisers were under pressure to disclose more details about the intelligence that led to the American strike that killed Soleimani.

Top Senate Democrats, citing “deep concern” about the lack of information coming from the Trump administration about the Iran operation, called on Defense Department officials to provide “regular briefings and documents” to Congress.

Minority Leader Chuck Schumer and the senators said in a letter Wednesday that the White House’s classified War Powers notification to Congress was “generic, vague, and entirely inconsistent in its level of detail” compared with the norm.

“While recognizing the need for operations security, we similarly believe there is a requirement to be transparent with the American people about how many troops this Administration plans to deploy in support of contingency plans,” wrote Schumer, Sen. Dick Durbin and the Armed Services Committee’s Sen. Jack Reed to Defense Secretary Mark Esper and Mark Milley, the chairman of the Joint chiefs of staff.

They also registered their “grave concern” with Trump’s comments on targeting Iranian cultural sites and asked for clarification. They said they expected a response by Friday.

Trump said Tuesday that his decision saved American lives and that members of Congress would get a briefing on the reasons for the U.S. attack.

“They were planning something,” he said of the Iranians.

Trump and top national security officials have justified the airstrike with general statements about the threat posed by Soleimani, who commanded proxy forces outside Iran and was responsible for the deaths of American troops in Iraq.

But the details have been scarce.

“He’s no longer a monster. He’s dead,” Trump said. “And that’s a good thing for a lot of countries. He was planning a very big attack and a very bad attack for us and other people, and we stopped him, and I don’t think anybody can complain about it.”

Soleimani was targeted while he was at an airport in Baghdad with Abu Mahdi al-Muhandis, a veteran Iraqi militant, who also was killed.

Trump said they weren’t in Baghdad to discuss vacation plans or visit a “nice resort” but were there to talk over “bad business.”

The lack of detail didn’t sit well with Democrats, who recall how President George W. Bush justified his invasion of Iraq by accusing Saddam Hussein of having what turned out to be non-existent weapons of mass destruction. Lawmakers in recent days have been pressing for more details about why Trump ordered the killing — a decision that previous administrations passed up because of fears it would unleash even more violence.

Soleimani traveled often and relatively openly, with visits to Baghdad more frequent in recent months. He also often showed up in Syria, including along the border between Iraq and Syria.

Schumer and Sen. Bob Menendez, the top Democrat on the Senate Foreign Relations Committee, have called on Trump to declassify the written notification he sent to Congress after the strike. The notification was required under the War Powers Resolution Act of 1973, which requires the president to report to Congress when American forces are sent into hostile situations.

“The president must come to Congress and present clear and compelling intelligence as to why the strike against Soleimani was absolutely necessary,” Menendez said in a speech on the Senate floor. “In the wake of all its misleading statements we must make clear to the administration that the president by himself does not have the authority to launch a war against Iran.”

Trump stressed that the strike was in retaliation for Iranian attacks and that the U.S. is prepared to attack again — “very strongly.” He also said that while he eventually wants to pull U.S. troops out of Iraq, now is not the time because it would allow Iran to gain a bigger foothold there.

“We had deep intelligence indicating there was active plotting to put American lives at risk,” and Iraqi lives, too, Secretary of State Mike Pompeo said.

Asked if the threat was imminent in days or weeks, Defense Secretary Mark Esper said: “I think it’s more fair to say days, for sure.”

Esper said the intelligence was precise — “razor thin.” He said top Republicans and Democrats in the House and the Senate plus the chairmen and vice chairmen of the intelligence committees in both chambers were getting a classified briefing Tuesday on what led to the decision to kill Soleimani. He said other lawmakers will be provided general details about the attack.