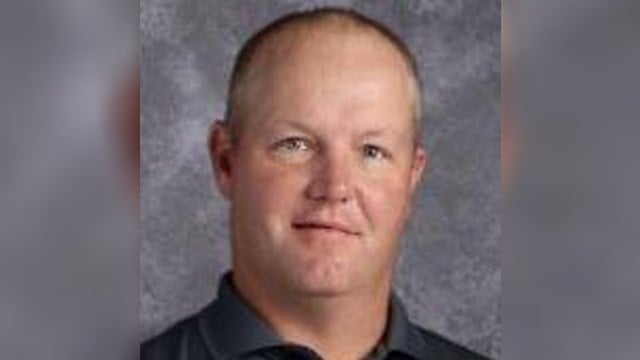 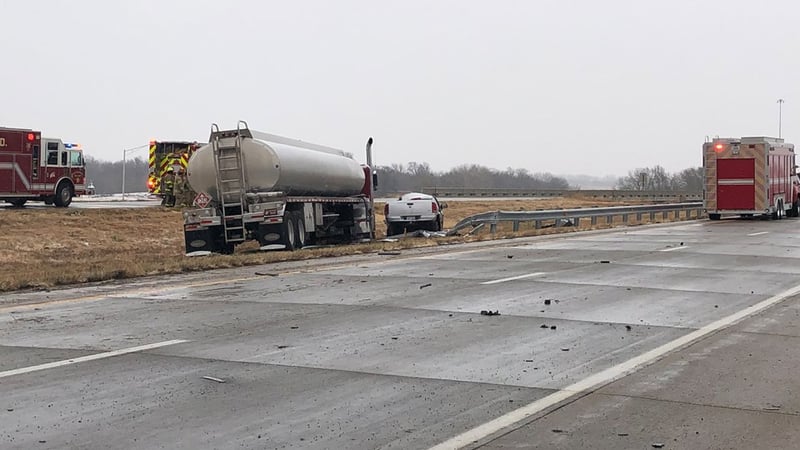 Fatal accident in near Medora in Reno County (Twitter/@TrooperBenKHP ) 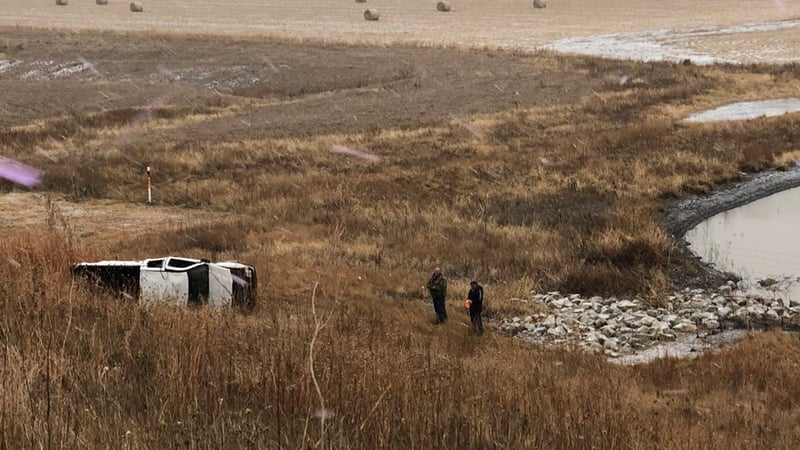 Details on winter weather conditions in Kansas (all times local):

Authorities say a 46-year-old middle school teacher was killed when he lost control of his pickup on an icy Reno County bridge and crashed into a semi.

The crash happened at around 7:30 a.m. Friday on K-61 about four miles north of Hutchinson. The Kansas Highway Patrol says Jory Konrade was heading south when his Chevy Silverado went into the northbound lanes and struck an oncoming semi.

Konrade, of Inman, died at the scene. He was a teacher and coach at Prairie Hills Middle School in Buhler.

"He will be greatly missed," USD 313 Superintendent Mike Berblinger said. "He was a wonderful man. We pray for his family, our students and our staff."

Winter weather conditions were also a factor in a fatal crash in Rush County and numerous other accidents in the state.

Officials say a Buhler middle school teacher was killed in a crash in icy conditions in Reno County.

Buhler Public Schools confirmed late Friday morning that Jory Konrade died following an accident on K-61 near Medora at around 7:30 a.m. He was a visual arts teacher and football coach at Prairie Hills Middle School, according to the school's website.

"With a heavy heart I am letting you know that Mr. Konrade was involved in the accident this morning and passed away from his injuries," the district said in a statement.

Counselors were on site are providing services to students. Parents were being allowed to pick up their children if need be.

The Kansas Highway Patrol says a 44-year-old woman was killed when she lost control of her car and collided with another vehicle.

It happened south of La Crosse in Rush County just after 7:30 a.m. Friday. The patrol says Terra Davis' vehicle spun and an SUV struck the passenger side of her car.

Davis, of La Crosse, was pronounced dead at a local hospital. The patrol's online crash log says she was not wearing a seat belt.

The driver and a passenger in the SUV suffered minor injuries.

Icy roads are causing trouble for drivers across KAKEland, including a fatality in south-central Kansas.

In Reno County, emergency dispatchers confirm one person has died in a crash near the K-61 at the Medora exit. The crash happened around 7:40 Friday morning. KDOT said northbound traffic was being diverted to ramps at that location.

Trooper Todd Hileman said roads in western Kansas are completely snow-packed and icy. He said if you don't have to drive, please don't

Western Kansas, if you do not have to drive today please don’t! Our roads right now are completely snowpacked and icy and we are working multiple slide offs as well as crashes. Please check https://t.co/vuhePOcyqZ for updates. pic.twitter.com/Dl6A1t0fgw

Multiple crashes on K61 near McPherson due to ice forming on bridges.#SlowDown, roadways are starting to get frozen over in places.#KSwx

Live look at snow-packed I-70 near Hays
Check out these photos from across KAKEland snapped by our viewers, staff and local officials. Do you have pictures to share with us? Email them to news@kake.com.