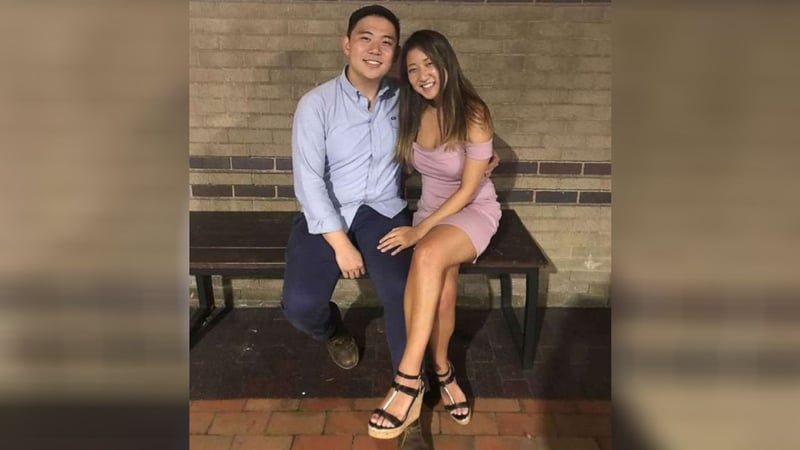 A former Boston College student has been charged with involuntary manslaughter for her alleged role in the suicide of her boyfriend, according to Massachusetts prosecutors.

South Korea resident Inyoung You, 21, was allegedly present when her boyfriend, Alexander Urtula, jumped to his death from the roof of a parking garage in Roxbury on May 20 -- the same day he was set to walk in his Boston College graduation ceremony, Suffolk County District Attorney Rachel Rollins announced Monday.

An initial search of Urtula's cellphone led to an "extensive" investigation in which prosecutors and detectives from the Massachusetts Bay Transportation Authority Police Department discovered that You was allegedly "physically, verbally and psychologically abusive" toward him during their 18-month "tumultuous" relationship, Rollins said.

The abuse allegedly became "more frequent" and "more powerful" in the days and hours leading up to Urtula's suicide, Rollins said.

"This unrelenting abuse was witnessed by friends and classmates of both parties and documented extensively in text messages between the couple and in Mr. Urtula's journal entries," she said.

In the two months prior to Urtula's death, the couple exchanged more than 75,000 text messages, at least 47,000 sent by You, Rollins said. When asked by a reporter whether You "explicitly" instructed Urtula to kill himself, Rollins replied, "I would comfortably say, yes, thousands of times."

"In the 47,000 text messages, yes, there were many, many instances where she instructed him to do so," she said.

The messages also allegedly included that he should "go die" and that she, his family and the world "would be better off without him," Rollins said. You also allegedly used "manipulative threats of self-harm" to control Urtula and isolate him from friends and family.

Urtula's family was in town from New Jersey to watch him graduate and ultimately learned of his plans to die by suicide through a series of correspondence via text, Rollins said.

You was able to find Urtula at the parking garage through the tracking app on her phone, Rollins said, adding that she was allegedly "aware of his spiraling depression and suicidal thoughts brought on by her abuse."

"Even still, she continued to encourage Mr. Urtula to take his own life," she said.

The indictment against You accuses her of "wanton and reckless" behavior in "overwhelming" Urtula's will to live. She is currently in South Korea, and prosecutors are hoping that she will voluntarily return after speaking with someone who is representing her.

If You does not return, they will attempt to extradite her from the country, Rollins said.

"Students come to Boston from around the world to attend our renowned colleges and universities," Rollins said. "They are eager to learn and experience our vibrant city. Their families and loved ones do not expect them to face unending physical and mental abuse."

A representative for Boston College did not immediately return ABC News' request for comment.

Rollins mentioned "Conrad's Law," a bill that is currently before a state judiciary committee that would make suicidal coercion a crime punishable up to five years, as well as the similarities the case has to the conviction of Michelle Carter, who as a teenager sent texts urging her then-boyfriend to kill himself.

However, Rollins characterized the case against You as 'separate and distinct."

More details of the case will be released during a future arraignment, Rollins said.