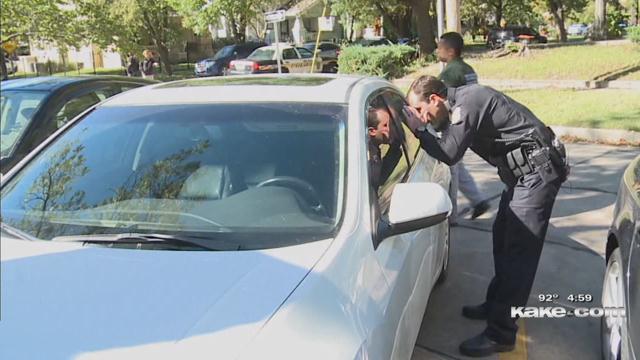 Police are warning Wichitans of an increase in burglaries from cars in specific neighborhoods south of Kellogg.

"In the last few weeks, Patrol South has seen an increase in auto burglaries," the Wichita Police Department posted on Facebook. "Thieves are stealing license plates, wallets, purses, phones and other electronics."

Most of those thefts are happening between 9 p.m. and 4 a.m. on Thursdays and Fridays, and primarily in neighborhoods along W Pawnee and along S Hydraulic. Charlene Fleming lives near Pawnee and Meridian, and she said has been a victim of car burglaries in the past.

"We don't leave anything inside of it," Fleming said. "Not even a few coins. Years ago, when I lived in an apartment, that's what they targeted."

Police say that's the way to go, and that you should avoid leaving anything in your vehicle that a thief might take.

"I left a notebook, a trapper notebook, in the backseat," said former Sedgwick County Sheriff's Detective Robert Holland. "At night, through the window, it looked like a laptop. So, they broke in the window to steal that."

Since someone stole Fleming's license plate a couple of years ago, she said it led to some changes in her day-to-day driving.

"We typically try to park our car in backward, so we can see our tags," Fleming said. "If we don't, we're always looking at our tags on our cars when we're leaving anywhere, nowadays."

"WPD also encourages citizens to use products to secure license plates such as anti-theft screws or plate covers which are available at your local hardware store," the department stated on Facebook. Instead of using normal license plate screws or bolts, drivers are encouraged to buy secure bolts. While it may not stop a determined thief, it should at least slow them down.

"Your common thief that's out there and wants to steal your license plate may have a standard screwdriver or a Phillips screwdriver with them that they'd use to steal it," said Wichita Police Lt. Scott Brunow with the Auto Thefts division. "Well, the standard or the Phillips screwdriver doesn't work on these theft preventive bolts." You can pick up those security bolts from a local hardware or auto parts store.

Lieutenant Brunow said overall auto thefts are down by about 15 percent compared to this time last year, but thefts from cars are about the same. Police say you can help prevent yourself from being a victim by removing any valuables from your car and by locking your doors.