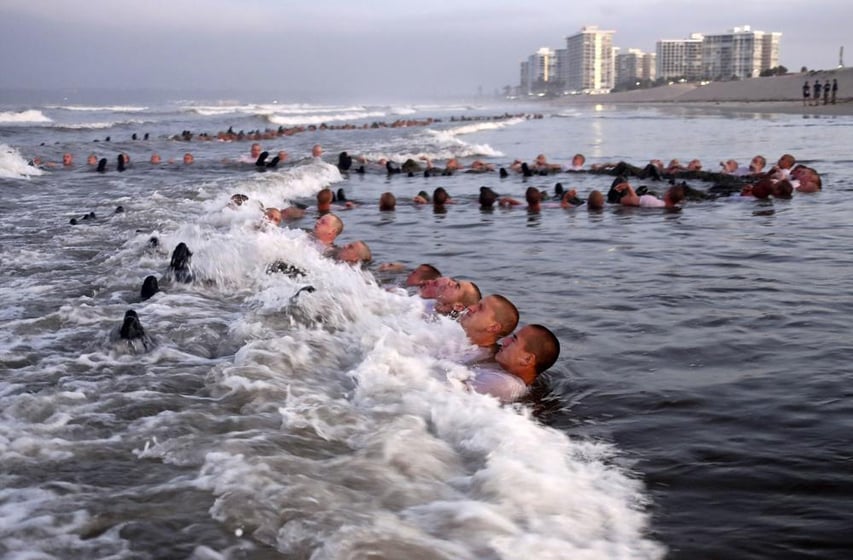 WASHINGTON (AP) — The Navy’s Special Warfare Command has reprimanded three officers in connection with the February death of a SEAL candidate who collapsed and died of acute pneumonia just hours after completing the grueling Hell Week test, according to Navy officials and a new report.

Commanders did not directly blame the officers for the death of SEAL candidate Kyle Mullen, and no one has been fired. But a Navy investigation into his death has triggered a number of changes in how sailors are monitored during the physically and mentally exhausting test, and has prompted the command to seek and conduct expanded testing for performance-enhancing drugs.

A new report released by the command concluded that Mullen, 24, from Manalapan, New Jersey, died “in the line of duty, not due to his own misconduct.” It said he had an enlarged heart that also contributed to his death, which came soon after he successfully finished Hell Week, the five-and-a-half-day test that comes during the first phase of assessment for SEAL candidates striving to get into the Basic Underwater Demolition/SEAL, or BUD/S, class. The training was at the Naval Special Warfare Training Center in Coronado, California.

The medical examiner’s autopsy report found that there was no evidence of performance-enhancing drugs in Mullen’s system and that they were not a contributing cause of death.

Staff and medical professionals who reviewed the findings said in the report that several substances commonly used as performance-enhancing drugs — testosterone, Anastrobol and sildenafil — were found in Mullen’s belongings. And they said that such substances could have been a contributing factor in his death, including his enlarged heart.

The autopsy did not include blood tests or urine analysis, which can show indications of the banned substances.

The potential use of banned drugs by any SEAL candidate, however, is forcing the Navy to confront what many believe is a persistent problem, particularly among special operations forces and service members trying to get through rigorous training and evaluation courses. Some additional testing for the drugs is already being done in connection with the course, and as of Sept. 22, 37 personnel had been dropped from the training program as a result.

The banned drugs have become a key focus of the ongoing investigation by the Naval Education and Training Command, or NETC. The education command is taking a deeper look at the entire SEAL training course, including policies, procedures and proper oversight by commanders.

NETC will also review the personnel decisions to determine if they were adequate or if there should be any actions taken against others at the command.

According to officials, administrative “non-punitive” letters were given to Navy Capt. Brian Drechsler, who is commodore of the Naval Special Warfare Center; Capt. Brad Geary, commanding officer of Naval Special Warfare’s Basic Training Command; and an unnamed senior medical officer.

Both Drechsler and the medical officer remain in the same jobs they were in at the time of Mullen’s death. Geary has moved on to a staff job, in a change that was planned before the death.

“Our deepest sympathy extends to Seaman Mullen’s family and friends during this difficult time,” said Rear Adm. Keith Davids, head of Naval Special Warfare Command. “NSW remains committed to transparency and we welcome the opportunity to review our assessment and selection programs, and help us look for additional ways to improve and prevent this kind of tragedy from happening again.”

He added, “Kyle’s death will not be in vain.”

His death, instead, has shined a light on the brutal Hell Week that pushes SEAL candidates to their limits. The test involves basic underwater demolition, survival and other combat tactics, and sailors get just two two-hour sleep periods during the event. It tests physical, mental and psychological strength along with leadership skills, and is so grueling that at least 50% to 60% don’t finish it.

The 320-page report includes a number of interviews with Mullen’s classmates, who described his deteriorating health in the last two days of the test. The classmates interviewed said they knew nothing about any steroid or performance-enhancing drug use by Mullen.

Mullen first began BUD/S in July 2021, but suffered heat stroke and left the class for recovery. He was cleared to join another class, went through orientation and began again in January 2022.

During the Hell Week test, the report said, Mullen was seen by medical personnel for shortness of breath and problems with his knee. He was given oxygen twice on the last morning of the test.

Classmates described Mullen coughing up pink liquid and filling a bottle with it. Another said he was in “full messed-up mode” and that while Mullen appeared to be “in good spirits” that final day, he was “in the worst medical shape out of anyone in the class.”

During the final medical checks after the test ended, his lungs were deemed “abnormal” and he went to the barracks in a wheelchair due to swelling in his legs.

The report said his condition worsened, and a medical officer on duty recommended they call 911, but that wasn’t done. According to the report, candidates are often wary of going to a hospital or seeking outside medical help because it could get them disqualified from the class. About 90 minutes later, as he got worse, they called 911.

The report said fire department personnel found him nonresponsive. They performed CPR and took him to the hospital, but he was declared dead a short time later.

The reluctance by some candidates to seek greater medical help is another area the Navy is looking into.

“We must address the cultural tension between the candidates’ desire to push through adversity to demonstrate grit and the need to recognize and report health information to remain medically fit for mission,” the command said. “We must create an environment that is supportive of the candidates and reinforces that their health and safety are the priority.”

Other changes that have been made include advanced cardiology screening of SEAL candidates for heart problems; pneumonia prevention shots; more medical scrutiny after Hell Week ends; increased training on performance-enhancing drugs; and expanded training for instructors.