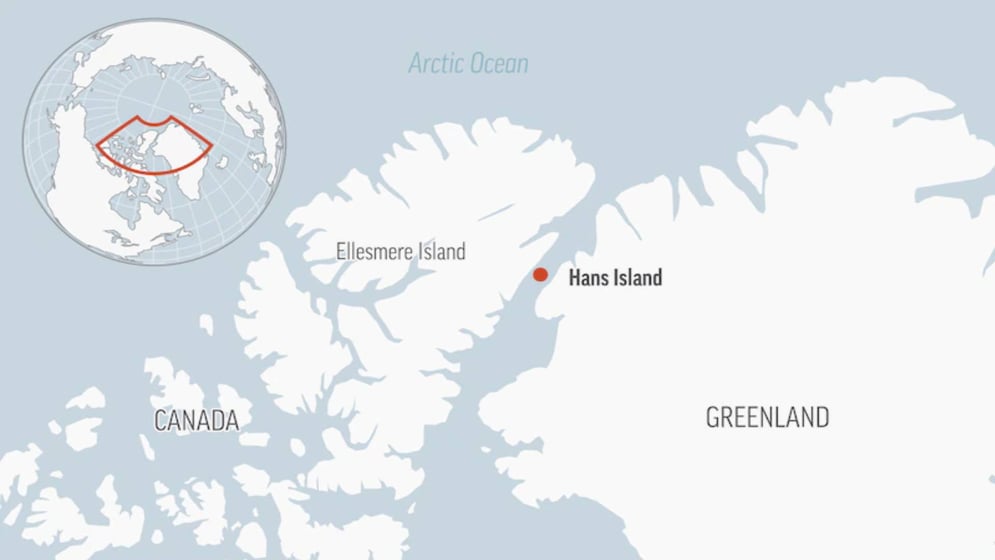 (ABC News) -- A territorial dispute between Denmark and Canada over a barren and uninhabited rock in the Arctic that has led to decades of friendly friction has come to an end, with the two countries agreeing on Tuesday to divide the tiny island between them.

Under the agreement, a border will be drawn across the 1.3-square-kilometer (half-square-mile) Hans Island in the waterway between the northwestern coast of the semi-autonomous Danish territory of Greenland and Canada's Ellesmere Island. The rock has no known mineral reserves of value.

“It sends a clear signal that it is possible to resolve border disputes ... in a pragmatic and peaceful way, where the all parties become winners,” said Danish Foreign Minister Jeppe Kofod. He said it was “an important signal now that there is much war and unrest in the world.”

Canada and Denmark agreed in 1973 to create a border through Nares Strait, halfway between Greenland and Canada. But they were unable to agree which country would have sovereignty over Hans Island, which lies about 1,100 kilometers (680 miles) south of the North Pole. In the end, they decided to work out the question of ownership later.

In the following years, the territorial dispute — nicknamed the “whisky war” by media — raised its head multiple times.

In 1984, Denmark’s minister of Greenland affairs raised a Danish flag on the island, buried a bottle of Danish schnapps at the base of the flagpole and left a note saying, “Welcome to the Danish island.” Canadians then planted their own flag and left a bottle of Canadian brandy. Since then, the countries have in turns hoisted their flags and left bottles of various spirits in a sort of tot-for-tot dispute.

In 2002, Nana Flensburg was part of a Danish military crew that stood on the cliff to perform a flag-raising ceremony. The Politiken newspaper on Tuesday quote her as saying in her diary that "among the stones in the cairns were lots of bottles, glasses, etc. with documents that informed about previous visits to the island.”

The agreement enters into force after the two countries’ internal procedures have been completed. In Denmark, the Parliament must first give its consent to the agreement.

“It's a win for Canada. It's a win for Denmark,” Canadian Foreign Minister Mélanie Joly said, while alluding to Russian President Vladimir Putin's invasion of Ukraine.

“We're showing other countries how territorial disputes can be resolved ... What we’re saying to President Putin is, ‘We have the best way to settle disputes.'"

Although both countries have sent warships to the island, there was never any risk of a shooting war. Both sides resolved to settle the problem peacefully and talks began in 2005.

The agreement means the United States will no longer be the only country with which Canada shares a land border.

“We now have a border with the E.U,” Joly said.

It also settles maritime boundaries around the island which could have grown in importance as global warming in the Northwest Passage could open the channels of Canada’s Arctic islands and shorten the voyage from Europe to the Far East. The United States, Canada, Russia, Denmark and Norway have been staking claims in the Arctic.

The settlement also gives indigenous access and rights of use to Hans island.