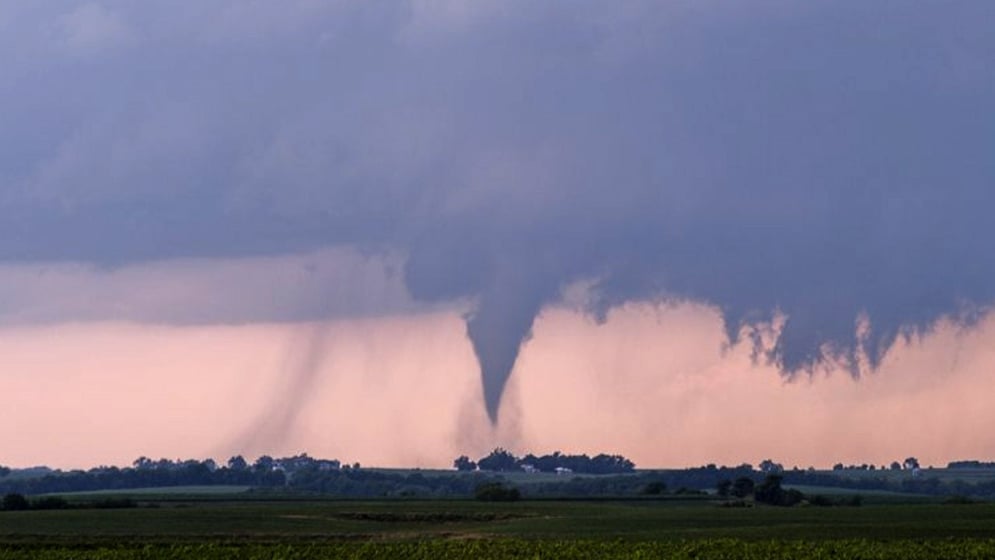 (CNN) -- Tornado activity in the region of the US known as Tornado Alley was at near-record low levels in April.

Not even a dozen tornadoes were reported in Texas, Oklahoma, Kansas and Nebraska during the month of April. This accounts for just 16% of all April, preliminary tornadoes in the US, instead of the average of 28%. Only the year 2018 had lower tornado activity since 2000, according to the Storm Prediction Center database. 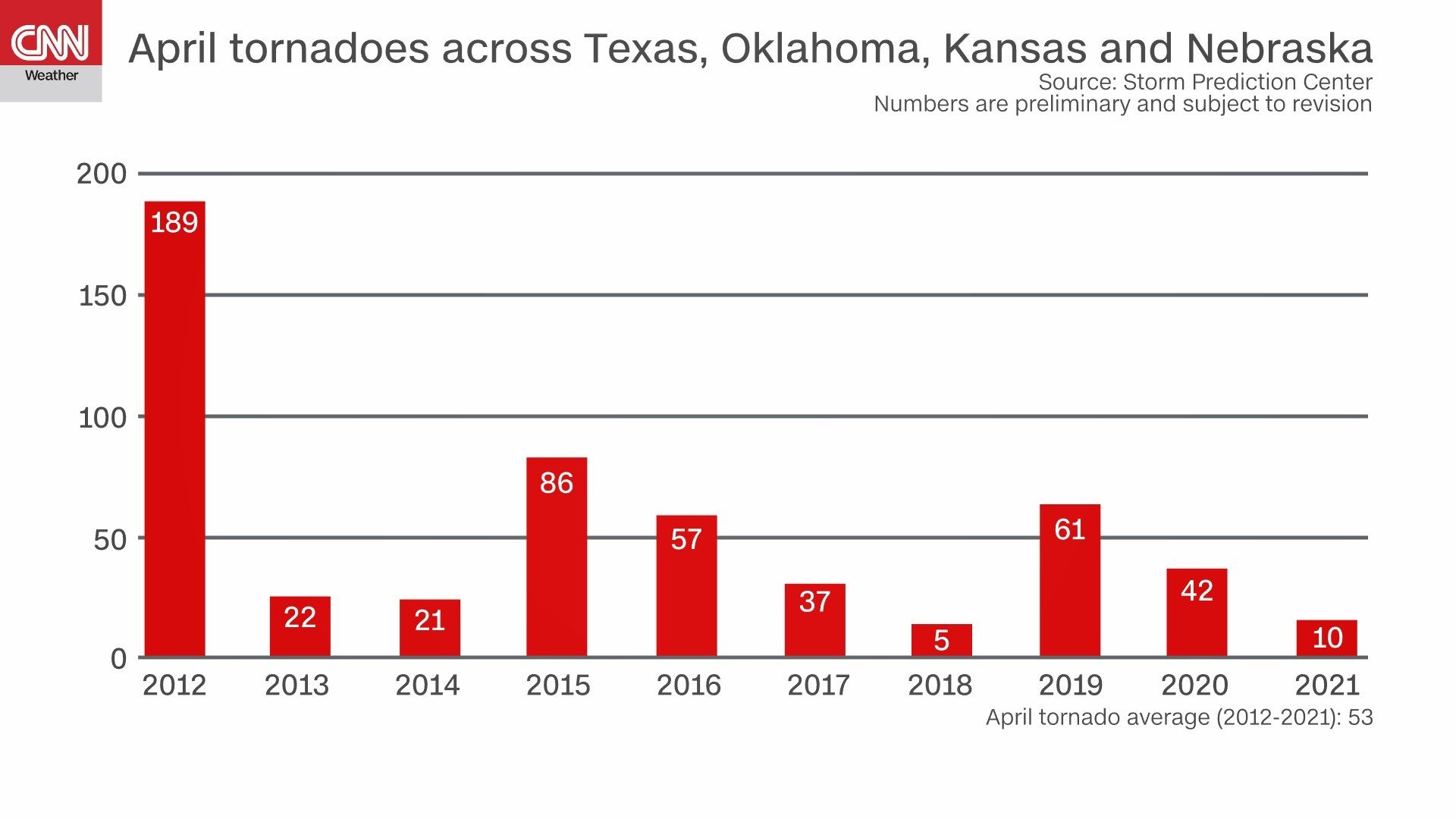 This part of the country has generally not seen many tornadoes so far this year, either. Through the second week of May, 60 tornadoes have been reported, compared to the 2012-2021 average of 80 tornadoes. Most of these tornadoes were reported in Texas and produced by just a few storm systems.

Tornado Alley encompasses much of the Central Plains. The region from Texas through South Dakota is where the frequency of tornadoes is the highest, especially from April through June.

Why Tornado Alley is usually prime for tornadoes

Tornado Alley is usually a common area for tornado formation.

It's where storm systems form as air passes over the Rocky Mountains and the ingredients needed for tornado development meet up. That includes strong, varying winds in the upper levels of the atmosphere, hot temperatures at the ground level and high humidity streaming north from the Gulf of Mexico.

"The lower tornado activity has largely been the result of an unfavorable pattern for tornadoes with occasional strong cold fronts shunting the deep, rich, high-quality moisture from the Gulf of Mexico south of the area," says Matt Elliott, warning coordination meteorologist at the National Oceanic and Atmospheric Administration's Storm Prediction Center.

The entire country has had a relatively quiet April in terms of tornado activity this year, with 63 reports, which is below the average of 192 preliminary tornadoes. The state with the most tornadoes was Louisiana.

Tornadoes are most common in the Southeast, such as Louisiana, Mississippi, Alabama and Georgia, during the first half of the year. Beginning in April, the risk for activity shifts into the Plains, or Tornado Alley, and becomes most likely there.

This is because these areas are generally the first to get the warm, moist air of spring -- and since the Plains have been colder than normal, we haven't seen that humid air mass extend much outside of the Southeast so far this year.

This year's majority of tornado reports have been across the south

But these four states in the Southeast had 26 reported tornadoes in April, which is more than the 10 in Tornado Alley. Last year, this difference was even more dramatic when 195 tornadoes were reported in those Southern states, compared to 42 in the Southern Plains.

"This year, the persistent weather pattern that has been generally unfavorable for severe storms in the Plains has been more favorable for the Southeast," Elliott told CNN.

Aside from the tornado counts, the number of tornado watches issued and their placement by the Storm Prediction Center illustrates where forecasters believed were the best chances for tornado-producing thunderstorms.

Most watches issued so far this year were in Mississippi, Alabama, Tennessee and Georgia, while Kansas, where you'd expect several watches to be issued, has only had one.

A warming climate may be shifting tornadoes to the densely populated Southeast.

Several studies, including a 2018 study by Victor Gensini and Harold Brooks, a researcher at NOAA's severe storms laboratory, observed a significant increase in Southeast tornadoes and tornado environments since 1979. They also noted a downward trend in tornadoes across the more traditional 'tornado alley' of the Great Plains.

"If there's one big takeaway from future tornadoes, it appears that on the aggregate they're gonna become more frequent, especially in the Southeastern United States," said Gensini of Northern Illinois University.

His research has shown that severe storms and tornadoes will become more frequent east of the Mississippi River as the climate warms.

Tornado data from this spring does align with this science for decreased twisters in Tornado Alley, though the frequent cold air outbreaks this spring are likely the biggest culprit.

Ocean temperatures could be to blame

Another hypothesis for this low activity is the ocean temperatures in the Pacific Ocean. La Niña is the phenomenon involving the long-term cooling of sea surface temperatures near the equator.

In some years, when there is a strong La Niña, it could have an impact on increased tornado activity, such as in 2011, when Oklahoma and Texas had a combined 100 tornadoes in April.

But not every event is the same, Elliott says: "While strong La Niña years may offer a somewhat greater potential for more tornado activity, it certainly doesn't guarantee it."

A La Niña is currently present in the Pacific, according to the Climate Prediction Center, but tornado activity has been dismal in the Plains this year.

Weather can dramatically change in an instant. Even though tornado activity this spring has been rather quiet in the Plains, a shift in the weather pattern can trigger an outbreak of tornadoes and even ramp up activity to above average levels in a single day.

In 2010, Oklahoma only had a few tornadoes through the beginning of May, but then 53 tornadoes affected the state in just one day, according to warning coordinator meteorologist Rick Smith at the National Weather Service office in Norman, Oklahoma.

It's important to remain weather aware and monitor weather forecasts throughout the year for any changes in this pattern.

"We are now (or will soon be for Nebraska) entering peak season for tornadoes across these areas, so it is important to be vigilant when thunderstorms are in the forecast and be prepared to take action should threatening weather approach your area," says Elliott.

Cooler than normal temperatures across the eastern two-thirds of the country this week should keep severe weather minimal in most of the US. Highs will be up to 30 degrees below average in the Southern Plains on Wednesday.

Warmer temperatures are expected to gradually return by this weekend, which could introduce greater chances for intense thunderstorms, including tornadoes.