John Sarcona was only 17 years old when he was admitted to NewYork-Presbyterian Hospital in New York City for life-threatening scoliosis that he described as forcing his spine to "bend by the hour."

Two years later, following an amazing recovery, he is learning to drive and is enjoying his first year of college.

Growing up with kyphoscoliosis

"Before surgeries, I was a normal kid," Sarcona told "Good Morning America." "I didn't have any restrictions, even from early signs of scoliosis, until we started to see it was more prominent."

In addition to the undergoing surgeries every six months, Sarcona was provided with a plastic brace to help stabilize his body throughout the day. However, the brace also made it difficult for him to do ordinary tasks, such as bending down to tie his shoes and running.

"It was hard for the fact that he loved sports," his mother, Joanne Sarcona, said in a video interview with the hospital. "As he was getting older, not fitting in was really starting to take a toll on him."

But John Sarcona had a strong support system in his family and friends, who would sign his brace and put stickers on it to help encourage him to get through the process.

He was instructed to wear his brace for 18 hours a day, but as his body started to grow, his spine started to bend an extra 15 degrees.

When another one of his doctors learned about how long he had been told to wear his brace for each day, he said, "if you were to wear it for 18 hours like you were, you would have had a bigger problem than scoliosis." 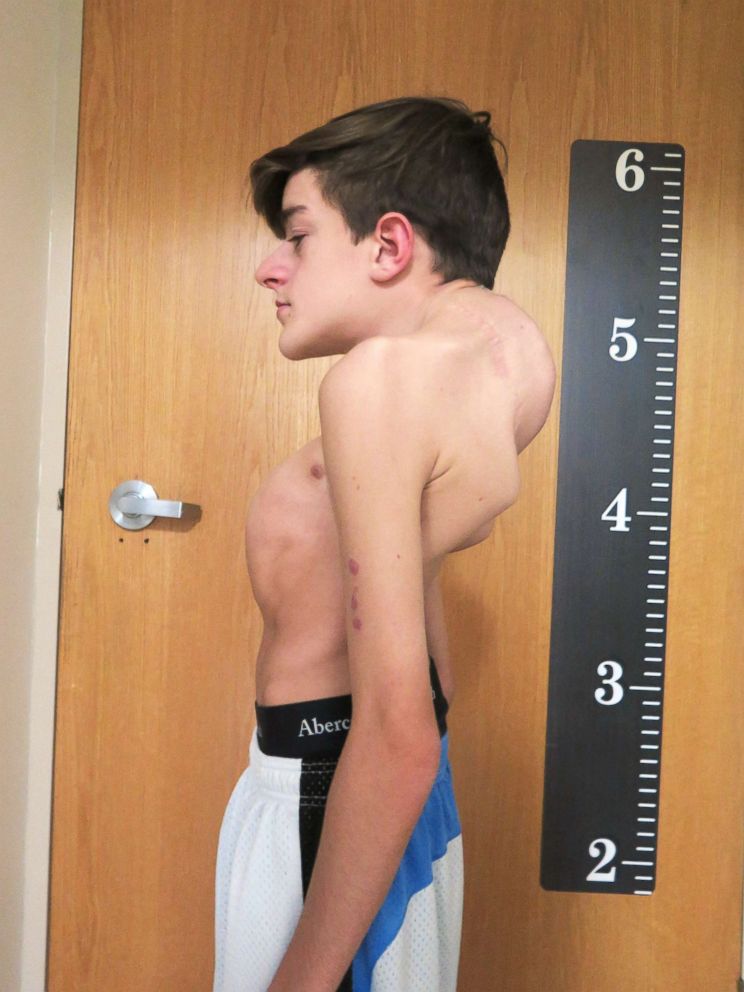 'The most painful experience I've ever had'

When John Sarcona was young, he had rods inserted into his spine to help with his kyphoscoliosis. In the summer of 2016, while at a baseball game, he received a call from his mother, who had discovered that one of his shirts had blood stains on it. Later, when she examined his back, she noticed six areas where the rods were protruding.

"His back was so bad that they looked like cysts on his spine," she shared with "GMA."

During this time, John Sarcona's weight went down to 78 pounds and his breathing levels declined.

"I was shocked, confused and scared to death," Joanne Sarcona said. "I felt [like] I was dying with my son."

She took him to a specialist at NewYork-Presbyterian to undergo surgery that prior surgeons had said posed a "99.9 percent risk that John would be paralyzed from the neck down."

Doctors at the hospital told John Sarcona that his spine, which was shaped like a "C," was "bending by the hour" and that he needed surgery immediately.

"Basically, he was being crushed to death," his mom said. 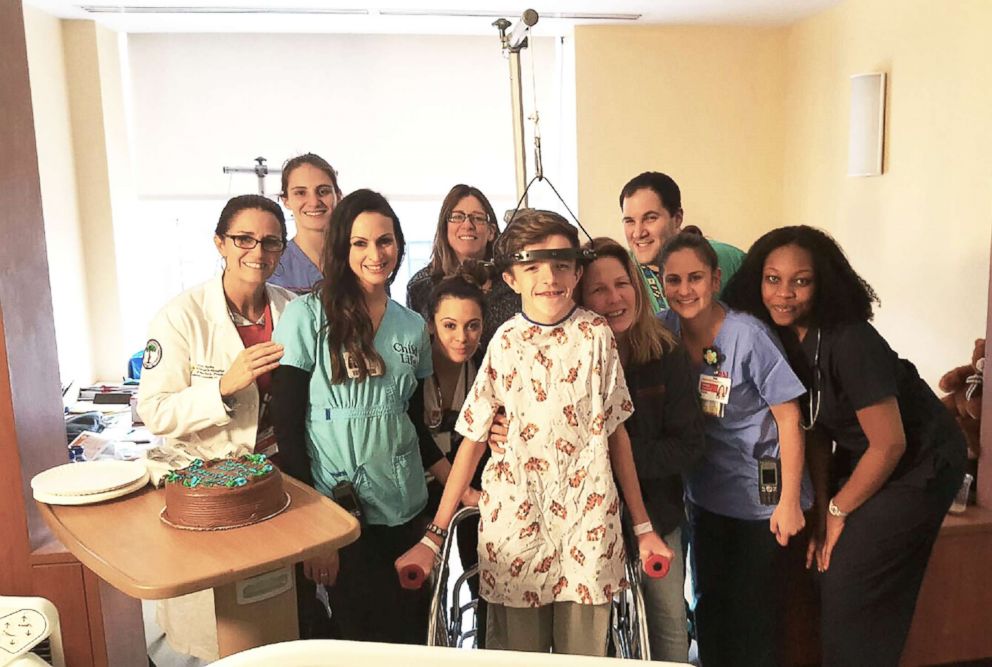 In November 2016, Lenke and his staff performed spinal reconstructive surgery on John Sarcona, using a device known as a halo traction. The procedure involved surgically implanting a ring around his head "and putting a traction weight that would slowly stretch out his spine."

"It was crazy to see... in that first week my neck started to straighten out," John said. "That was special for my parents to see how much better I was looking. It definitely put a smile on my face." 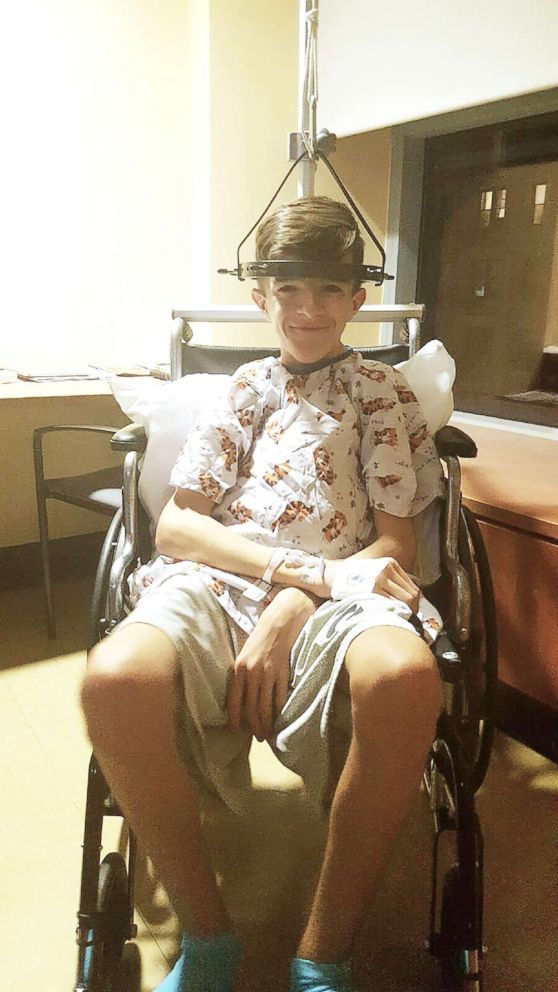 He said that during the five weeks in which he stayed at the hospital, he noticed an immediate difference in how he felt.

"People say their first steps afterward almost feel like you're in a new body and your legs will feel different," John Sarcona said. "It was such a unique feeling, like my center of gravity had changed. I felt so much straighter sitting up on my bed for the first time.”

His mother, who stayed with him every day, was also in awe of his progress. "You just felt this amazing positive-ness at the hospital," she said. "Everything was falling into place."

A new body and a new life

This year marks a new chapter in John Sarcona's life. He stands seven inches taller, plays golf and basketball with his friends, is learning how to drive and he started his first semester at Nassau Community College. He credits much of his miraculous journey to Lenke, NewYork-Presbyterian and his parents. 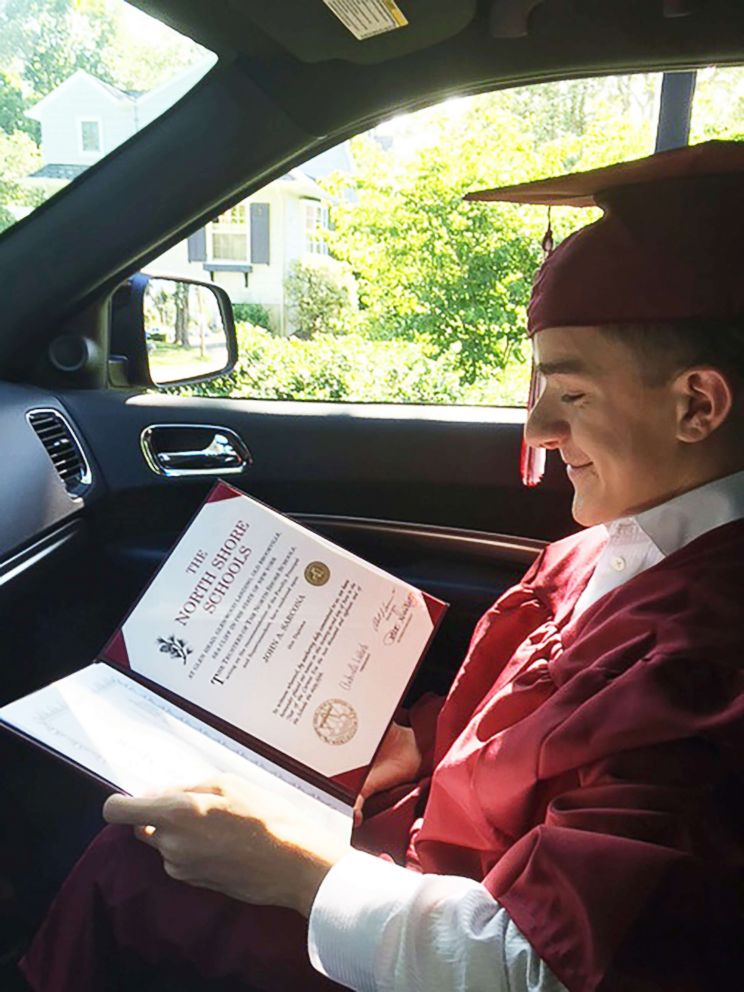 "We learned in our time of challenge [to] put your faith and trust on overdrive," Joanne Sarcona said. "You have to maintain a positive attitude in any way possible."

"I feel very motivated and accomplished to know that I have overcome so much," John said. "I'm at a state where I feel on a level with everyone else, something I've never felt before."

He added, "I feel a sense of freedom, knowing that there's not a date over my head for when the next surgery is."