No. 17 Baylor beats No. 9 Kansas in matchup of last 2 champs 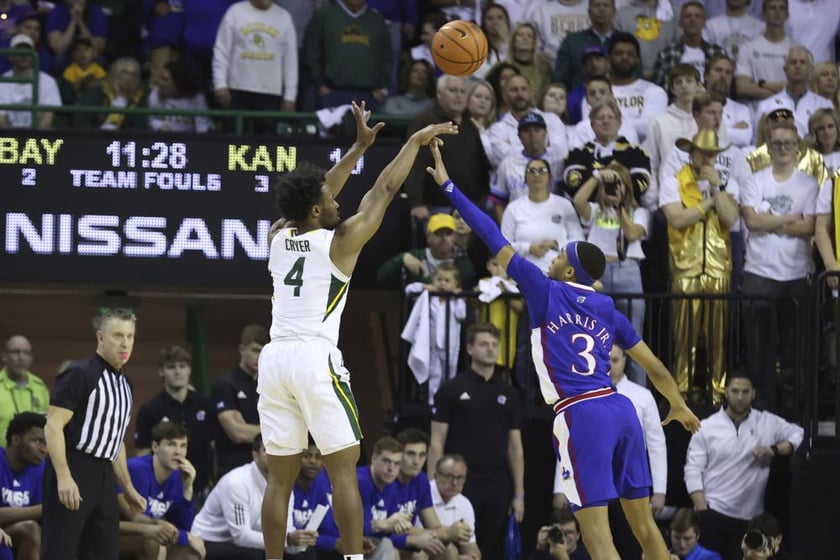 WACO, Texas (AP) — LJ Cryer had 22 points with five 3-pointers and 17th-ranked Baylor stretched its Big 12-best winning streak to five games with a 75-69 win over No. 9 Kansas on Monday night in a matchup of the last two national champions.

Freshman Gradey Dick had 24 points for the Jayhawks while Jalen Wilson had 23. Kevin McCullar Jr. had 14 points and 12 rebounds for his fifth double-double this season.

Love converted a three-point play for the Bears with 14:32 left to put them ahead to stay after Kansas took its only lead at 46-45 when Wilson swished a 3-pointer from the left wing. Love’s field goal and free throw started a 12-3 run that he capped with a 3-pointer.

KJ Adams made two free throws with 6 seconds left in the first half to get the Jayhawks within 41-34, the closest they had been since about five minutes into the game.

After Wilson’s layup got Kansas within 11-7, Baylor had a 9-0 run that was punctuated by Josh Ojianwuna’s two-handed putback dunk. That was the last time in the half that the Bears had consecutive scores, though Cryer did make three 3s in an 83-second span — the first two after 3s by Dick and Wilson, and the third following two free throws by Dick.

Kansas: The other times the Jayhawks lost three in a row under Self were in February 2005, February 2013 and January 2021. ... Dick got his second foul only 3:13 into the first half, and was limited to 11 minutes before the break.

Baylor: The Bears got off to a fast start with a steal by Bridges that led to a fast-break layup by Cryer before Flo Thamba had a three-point play. Bridges then had another steal, this one in the backcourt, though Cryer missed an open 3 that would have made it 8-0 only a minute into the game. ... The Bears are 25-8 against Top 25 teams over the past four seasons, the nation’s best mark.

Kansas goes to Rupp Arena to play Kentucky in the SEC/Big 12 Challenge on Saturday.

Baylor is home for its SEC/Big 12 Challenge game against Arkansas on Saturday. That is a rematch of the 2021 Elite Eight game the Bears won 81-72 on way to winning their national championship.