Elon Musk is being sued over his 'funding secured' tweet. Here's what you need to know 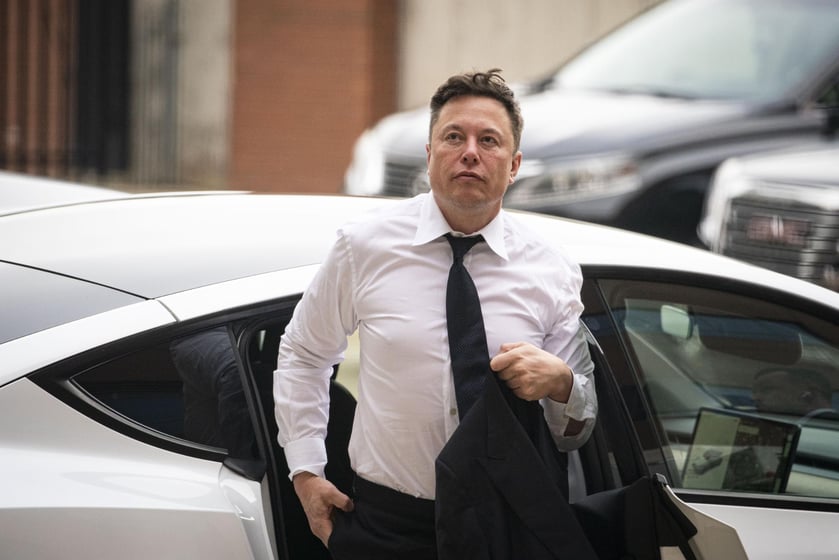 A four-year old tweet from Elon Musk has the Tesla CEO back in court starting Tuesday. In this file image, Elon Musk here arrives at court in Wilmington, Delaware, in 2021.
Al Drago/Bloomberg/Getty Images

(CNN) -- A four-year old tweet from Elon Musk has the Tesla CEO back in court starting Tuesday.

Musk, Tesla and other Tesla directors are facing a shareholder lawsuit over his now-infamous 2018 tweet, which said that he was thinking about taking Tesla private at a price of $420 a share. If he had ended the tweet right there, there wouldn't still be coverage of it, or a lawsuit that seeks unspecified damages.

But he concluded it with two words that have resulted in Musk having to pay millions of dollars in fines and legal fees: "Funding secured."

It turned out that while Musk had spoken to executives of the Saudi sovereign wealth fund about the money he would need to take Tesla private, the funding was anything but "secured."

Tesla shares initially climbed 11% on the day of on his original tweet, but they never reached that promised $420 level, reaching a high that day of $387.46. And they soon fell well below their pre-tweet price of $344, hitting $263.24 a month later, as it became clear that the funding was less than secure, prompting the shareholder suit that is just now reaching trial after more than four years.

A turn from losses to profits about a year after the tweet started Tesla shares on an extraordinary run, gaining 1520% from the day of the tweet to its record high in November 2021. That record close of $409.97 works out to $6,150 a share, when adjusted for the two stock splits since that day. Even with the 70% decline in Tesla share from that all-time high to Friday's close, shares are still up 384% since the close on the day of the 2018 tweet.

Musk's tweet also prompted a civil suit by the Securities and Exchange Commission, the federal agency charged with protecting investors by requiring executives to tell the truth. It originally sought to strip him of his position as Tesla's CEO. It eventually reached a settlement with Musk in which he and Tesla each agreed to pay $20 million in fines, and Musk gave up his title as chairman of the company but retained the CEO title. It also required that any tweet he sent out with material information about Tesla be reviewed in advance by other company executives.

Musk later said he only agreed to the settlement because continuing to fight would have resulted in banks cutting off funding that Tesla needed to survive, which was then losing money and facing a cash crunch. In comments at a TED conference last year he compared the negotiations with the SEC as comparable to someone pointing a gun to his child's head.

But despite his claims to have funding secured, Federal Judge Edward Chen, who is hearing the case that starts Tuesday, said in a ruling last April that "no reasonable jury could find Musk's tweets on August 7, 2018 accurate or not misleading" and rejected Musk and other defendants' request to have the case dismissed before trial.

Last week Chen also ruled against a motion by Musk and other defendants to have the case moved to Texas, where Tesla's headquarters are now based, rather than in San Francisco. They had argued that media attention about Musk and his purchase of Twitter made it impossible to find an unbiased jury in the San Francisco Bay area, particularly its coverage of his layoffs at Twitter since completing the purchase, and his views on allowing tweets which might have previously been banned for spreading misinformation.

"A potential juror who already holds the opinion that Mr. Musk uses Twitter inappropriately or is not honest on the application is unlikely to untangle that bias from his or her evaluation of the evidence in this case and render an impartial verdict," Musk's attorneys argued in the request to move the trial. Musk's lawyers said that surveys of 200 potential jurors found that of 116 had a negative opinion of Musk already, and only 26 had a positive opinion of him.

"The juror questionnaires reinforce that the jury pool in this district is biased against Mr. Musk, that much of the bias relates directly to issues in this case (namely, Mr. Musk's use of and honesty on Twitter), and that whatever baseline existed previously has been fanned and emphasized by the media coverage of recent events," his attorneys said in the filing. "These numbers make clear that an impartial juror cannot feasibly be impaneled from this juror pool."

During the selection process Tuesday to pick the nine members of jury, potential jurors were asked about their views about Musk that they had given on those questionnaires.

One potential juror had written that Musk comes off as "arrogant and narcissistic." But when asked by the judge if she believes that she could put aside those feelings and render a verdict based only on what is said in the courtroom, she replied, "without a doubt."

"A lot of people aren't likable people but that doesn't mean you should judge them on that," she said. "There are times I don't like my husband."

This is only the latest court case involving Musk. He still awaiting a decision in a bench trial in a separate shareholder case held in Delaware state court challenging the compensation package he received from Tesla that made him the richest person on the planet until the recent decline in the company's stock price.