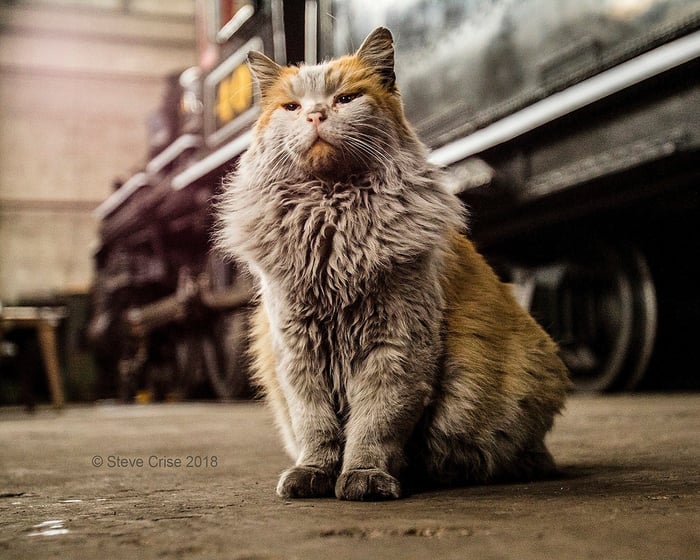 LAS VEGAS (AP) — The historic Nevada Northern Railway Museum is mourning the death of its resident cat who became an unlikely internet sensation.

Dirt — short for Dirtbag — died Wednesday in the town of Ely at the age of 15, the railway said on its website.

The semi-feral feline was a staple at the museum, the Las Vegas Review-Journal reported. His online notoriety, stemming from a Facebook photo an employee posted five years ago, led to the creation of Dirt merch including keychains, T-shirts, mugs and even his own coffee blend.

Dirt was free to come and go at the museum, which lies 240 miles (386 kilometers) north of Las Vegas. He was born in the railway’s engine house, Railway President Mark Bassett said. His name came from his orange and white coat always being stained with dirt and grease and from loathing baths.

When Dirt’s pictures first hit the internet, social media treated the cat less like dirt and more like a dignitary.

“We had a family fly over from China to LA, to Las Vegas, rent a car and drive to Ely to see Dirt,” Bassett told the newspaper. “And it’s like, ‘He’s a cat! He’s not on display.’”

The museum is known for offering train rides pulled by century-old steam engines and tours of the machine shop and engine house. Bassett said Dirt always came out during the tour, to the delight of visitors, who wanted his picture.

Here’s Dirt’s story. In the spring of 2008, a little kitten of orange and white fur was found in the engine house by himself. The mother and any other kittens were long gone. The crew at the time would sit for hours each day with cans of tuna and soft cat food, to get the little fur ball to trust them.

When he finally came around to trusting them, Al, the railroad’s Master Mechanic, took him to the vet for a checkup, shots, and eventually he was neutered. It was live and let live. The shop guys did their thing, and the little kitten did his thing. The warmest place in the shop is in the cab of a coal-fired steam locomotive. There is coal dust everywhere. Over time, our little ball of fur started picking up some of the black coal dust, and he was named Dirtbag. As our visitors started discovering the shop’s cat, it was decided to shorten his name to Dirt.

The engine house and machine shop are very dirty, noisy environments. In addition to the locomotives and railroad cars being moved in and out. Repair work goes on all the time. Dirt got very wise, very fast, quickly figuring out where not to be when locomotives and cars were moving, or work was being performed.

He grew into a large rough-and-tough tom cat that ruled the shop and surrounding neighborhood. We saw him playing fetch with gophers and bats. Don't ask us how he got them, he just did. He hated being cleaned up, but loved being a railroader. It was not uncommon to find him rolling around in the dust outside the shop.

The shop knew he was special, and did what they could to protect him. When Angie, our superintendent, went to work in the mechanical department she became one of his caretakers. She became his nemesis, since she took him for his vet visits. She cleaned him as much as she could, which Dirt did NOT like at all. To make amends, she would sneak him turkey dinners on the holidays.

The museum plans to honor Dirt with a funeral service and two bronze statues, Bassett said.

Meanwhile, Dirt Jr. — or D.J. — another rescue cat, still resides at the museum.