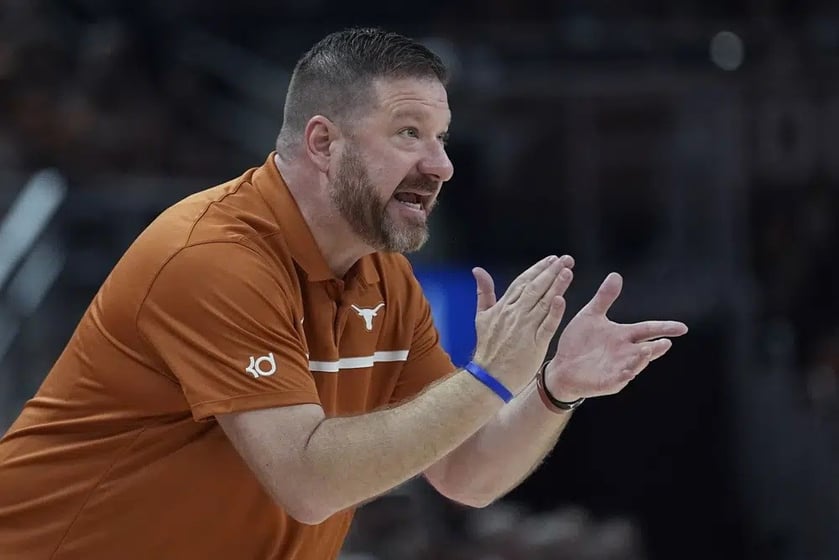 Texas head coach Chris Beard talks to his players during the first half of an NCAA college basketball game against Arkansas-Pine Bluff in Austin, Texas, Saturday, Dec. 10, 2022. (AP Photo/Eric Gay)

AUSTIN, Texas (AP) — Texas has fired basketball coach Chris Beard, who faces a felony domestic family violence charge stemming from a Dec. 12 incident involving his fiancée, with the school telling his attorney on Thursday that Beard is “unfit” for the position.

Beard had five years left on a seven-year guaranteed contract that included a provision he could be fired for cause if he was charged with a felony or committed other behavior unbecoming of his position or that reflected poorly on the university.

The charge of assault by strangulation/suffocation family violence carries a possible prison sentence of two to 10 years if convicted; the woman told police Beard strangled and bit her, but later denied he choked her.

Beard had been suspended without pay since he was arrested, and school officials had said there was internal investigation.

The university’s vice president of legal affairs, Jim Davis, wrote in a letter to Beard’s attorney Thursday that Beard engaged in “unacceptable behavior that makes him unfit to serve as head coach at our university.” Whether prosecutors continue with the case does not determine whether Beard engaged in conduct unbecoming of the school, Davis wrote.

Police responded to an emergency call at Beard’s house after midnight on Dec. 12 and arrested him after Beard’s fiancée, Randi Trew, told officers he choked her from behind, bit her and hit her when the two got in an argument.

The Associated Press does not typically identify alleged victims of extreme violence, but Trew issued a public statement on Dec. 23 in which she denied telling police Beard choked her. She also said she never intended for him to be arrested or prosecuted.

“Chris did not strangle me, and I told that to law enforcement that evening,” Trew said in her statement. “Chris has stated that he was acting in self-defense, and I do not refute that. I do not believe Chris was trying to intentionally harm me in any way.”

Trew’s statement did not address why she made the emergency call or other details in the police report, such as bite marks and abrasions on her face and telling officers that she couldn’t breathe for about five seconds.

Beard’s attorney, Perry Minton, has said the coach is innocent, and pointed to Trew’s statement in a letter sent early Thursday to the university in which Minton pressed the school to keep Beard.

“Coach Beard has not done anything to violate any provision of his contract with the University of Texas,” Minton wrote, adding he expects the charges to be dropped.

Minton’s letter also said Texas athletic director Chris Del Conte “has repeatedly reported to our team that he is certain that Chris Beard did nothing wrong — and is innocent.” It also said said that Texas officials told Beard to resign or be fired.

“Your letter this morning reveals that Mr. Beard does not understand the significance of the behavior he knows he engaged in, or the ensuing events that impair his ability to effectively lead our program,” Davis wrote in the school’s termination letter.

“This lack of self-awareness is yet another failure of judgement that makes Mr. Beard unfit to serve as a head coach at our university,” Davis wrote.

According to the arrest affidavit, Trew initially told police that she and Beard they had been in an argument where she broke his glasses before he “just snapped on me and became super violent.” Police reported Trew said Beard slapped her glasses off her face and “choked me, bit me, bruises all over my leg, throwing me around and going nuts.”

The Travis County district attorney’s office has not responded to previous requests for comment on Beard’s case or whether Trew’s Dec. 23 statement would change how prosecutors proceed with the felony charge. A Jan. 18 court hearing is scheduled, according to online records.

Beard led Texas Tech to the 2019 NCAA Tournament championship game and was hired at Texas in 2021 with the expectation that he would lift his alma mater to the same elite level. He had the Longhorns program humming this season, starting 6-0 and ranked as high as No. 2.

Associate head coach Rodney Terry took Beard’s place during the suspension, and Del Conte said Thursday that Terry would remain acting head coach through the rest of this season.

“We thank Coach Rodney Terry for his exemplary leadership both on and off the court at a time when our team needed it most,” Del Conte said. “We are proud of our student-athletes, coaches and staff, who throughout this difficult time have continued to make us proud to be Longhorns.”

A Texas graduate, Beard spent 10 seasons at Texas Tech as an assistant under Bob Knight from 2001-2011, then returned there as head coach in 2016.

He was 112-55 in five seasons with the Red Raiders and was named The The Associated Press coach of the year in 2019 as he guided Texas Tech to a 31-7 finish and lost in an overtime thriller to Virginia in the national championship game.

His departure for Texas — a deal reached after a meeting with Del Conte that included a McDonald’s breakfast an hour’s drive north of Lubbock — left Texas Tech officials frustrated.

As soon as he landed in Austin, Beard set out to rebuild a program from the ground up, changing the roster and trying to whip up new enthusiasm for the program as he engaged with students and often held comedic “fireside chats” on campus. In his first season, he led Texas to a first-round victory over Virginia Tech that was the Longhorns’ first NCAA Tournament win since 2014.