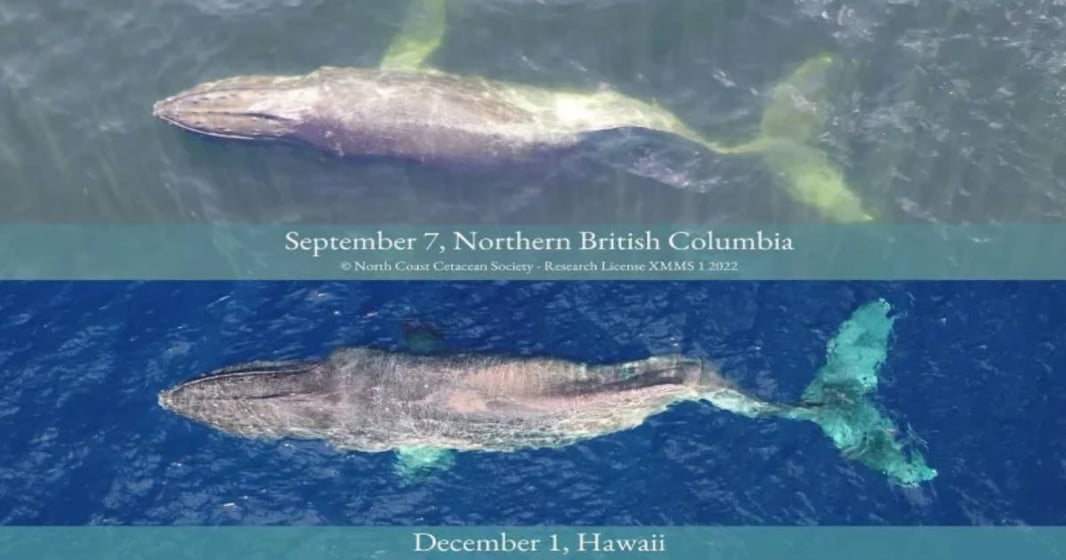 (YAHOO/KAKE) - Moon, a beloved humpback whale tracked for years by researchers, is dying.

Those who study whales have known about Moon's existence for years. She has been tracked by researchers in the Pacific. Like other whales, she migrates every year from the feeding grounds near British Columbia to the breeding grounds in Hawaii before making the journey back.  Two years ago, they saw her with her calf, teaching him all about living in the sea.

But this past September, as she swam all along by the Fin Island Research Station in British Columbia, researchers noticed that something was terribly wrong: her spine was deformed. Her tail was broken, and her entire back, from the dorsal fin to fluke, was curved into an "S" shape. It is believed that she was struck by a large boat. Using drone footage, they were able to determine Moon's identity.

Now, BCWhales believe she's on a mission of "tenacity and tragedy," having swum more than 3,000 miles in what they believe will be her last journey before she dies.

Earlier this month, Moon looked like she was in a lot of distress. She can only use her pectoral fins to swim. Janine Wray, CEO and lead researcher for BCWhales described Moon's situation as "literally doing the breaststroke to make (the) migration."

Yahoo reports that, furthermore, the migration left her "completely emaciated," which is evident by her skinner frame. She also accumulated an excessive load of whale lice.

"The harrowing images of Moon’s twisted body in Maui stirred us all. Not only was she likely in considerable pain, but she had somehow migrated thousands of miles across the North Pacific to her Hawaiian breeding grounds without being able to propel herself with her tail," BCWhales said.

"The poor condition of the animal when she was first sighted off the coast of Maui speaks to the toll that this took on her," Currie added.

"We will never truly understand the strength it took for Moon to take on what is regrettably her last journey, but it is on us to respect such tenacity within another species and recognize that vessel strikes lead to a devastating end," BCWhales said.

Human intervention at this point is not possible. Euthanization isn't an option because it would risk poisoning the marine life that will probably feed off Moon's remains.

Vessel strikes continue to pose a real and imminent threat to local whale populations, according to the Pacific Whale Foundation.

Vessel strikes are common, especially in areas where shipping routes overlap with whale habitats. However, these strikes aren't always reported or even noticed.

To reduce vessel strikes, BCWhales encourages boaters to be aware of local laws and best practices.

"(Moon’s) situation, a probable vessel strike leading to a fatal injury, highlights the impact that humans can have on whales and the urgent need for added protections so this does not continue happening," Currie said.