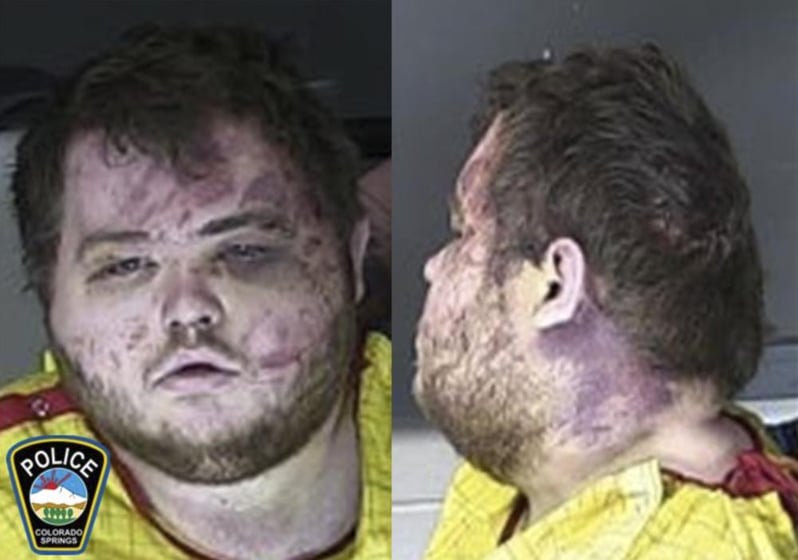 COLORADO SPRINGS, Colo. (AP) — The alleged shooter facing possible hate crime charges in the fatal shooting of five people at a Colorado Springs gay nightclub was ordered held without bail in an initial court appearance Wednesday as the suspect sat slumped over in a chair.

Anderson Lee Aldrich, 22, could be seen with injuries visible on their face and head in a brief video appearance from jail. Aldrich appeared to need prompting by defense attorneys and offered a slurred response when asked to state their name by El Paso County Court Judge Charlotte Ankeny.

The suspect was beaten into submission by patrons during Saturday night’s shooting at Club Q and released from the hospital Tuesday. The motive in the shooting was still under investigation, but authorities said he faces possible murder and hate crime charges.

Hate crime charges would require proving that the shooter was motivated by bias, such as against the victims’ actual or perceived sexual orientation or gender identity. The charges against Aldrich are preliminary, and prosecutors have not yet filed formal charges. Aldrich is represented by Joseph Archambault, a chief trial deputy with the state public defender’s office. Lawyers from the office do not comment on cases to the media.

Prosecutor Michael Allen repeatedly referred to the suspect as “he” during a press briefing after the hearing and said the suspect’s gender status would not change anything about the case in his opinion. Allen said Aldrich was “physically competent” to stand charges.

Ankeny set the next hearing for Dec. 6.

Aldrich’s name was changed more than six years ago as a teenager, after filing a legal petition in Texas seeking to “protect himself” from a father with a criminal history including domestic violence against Aldrich’s mother.

Aldrich was known as Nicholas Franklin Brink until 2016. Weeks before turning 16, Aldrich successfully petitioned a Texas court for a name change, court records show. A petition for the name change was submitted on Brink’s behalf by his legal guardians at the time.

“Minor wishes to protect himself and his future from any connections to birth father and his criminal history. Father has had no contact with minor for several years,” said the petition filed in Bexar County, Texas.

The suspect’s father is a mixed martial arts fighter and pornography performer with an extensive criminal history, including convictions for battery against the alleged shooter’s mother, Laura Voepel, both before and after the suspect was born, state and federal court records show. A 2002 misdemeanor battery conviction in California resulted in a protective order that initially barred the father, Aaron F. Brink, from contacting the suspect or Voepel except through an attorney, but was later modified to allow monitored visits with the child.

The father also was sentenced to 2 1/2 years in custody for importation of marijuana and while on supervised release violated his conditions by testing positive for illegal steroids, according to public records. Brink could not be reached for comment.

One of the suspect’s grandfathers is Randy Voepel, an outgoing lawmaker in the California state Assembly. The suspect’s mother, Laura Voepel, identified Randy Voepel as her father on her Facebook page in a 2020 post about his time in the state Legislature.

Voepel, a Republican, had a mixed voting record on LGBTQ bills. He compared the Jan. 6th attack on the U.S. Capitol to the Revolutionary War, calling it the “first shots fired against tyranny.” In response to criticism, he later said he didn’t “condone or support the violence and lawlessness that took place.”

Aldrich’s request for a name change came months after Aldrich was apparently targeted by online bullying. A website posting from June 2015 that attacked a teen named Nick Brink suggests they may have been bullied in high school. The post included photos similar to ones of the shooting suspect and ridiculed Brink over their weight, lack of money and what it said was an interest in Chinese cartoons.

Additionally, a YouTube account was opened in Brink’s name that included an animation titled “Asian homosexual gets molested.”

The name change and bullying were first reported by The Washington Post.