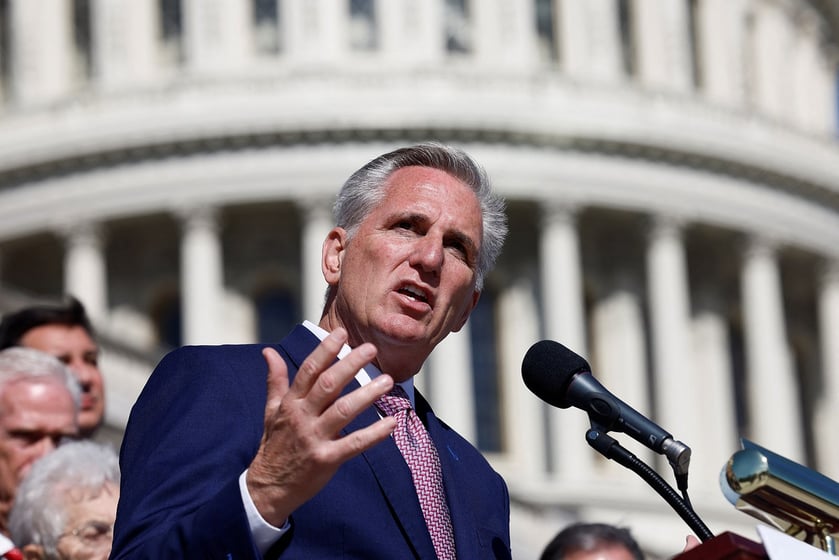 Kevin McCarthy, here in Washington, D.C., in September, is poised to lead the House GOP despite the far-right revolt.
Evelyn Hockstein/Reuters

(CNN) -- House GOP Leader Kevin McCarthy has won his party's nomination for speaker, beating conservative challenger Rep. Andy Biggs in a 188-31 vote, according to multiple sources in the room.

It was a secret ballot, and McCarthy only needed a simple majority.

While Biggs' challenge was always seen as a long shot, the number of Republicans voting for him shows how much work McCarthy has to do to win over holdouts between now and January, when he will need to win a majority of the entire House.

A week after Election Day, CNN has still not yet projected whether Republicans will win the House. But McCarthy is confident that he will win a majority of House GOP votes on Tuesday to lead his conference -- and will earn in January the 218 votes necessary to hold the speaker's gavel.

Three House Republicans — Kat Cammack of Florida, Kelly Armstrong of North Dakota and Brian Fitzpatrick of Pennsylvania — nominated McCarthy for leader, arguing that he has worked harder than anyone, and that party unity is the only path to victory.

Biggs, a former chair of the House Freedom Caucus, announced on Newsmax on Monday night that he would run against McCarthy, while acknowledging it would be "tough" to beat someone who has "raised a lot of money" to elect his colleagues.

"This is not just about Kevin," Biggs said on Monday. "I think it's about institutional direction and trajectory."

Biggs was nominated by Texas Rep. Chip Roy and South Carolina Rep. Ralph Norman, who asserted that the House GOP conference needs to change the way the House operates.

Before Biggs' announcement, McCarthy and House Republican Whip Steve Scalise, who is running to be majority leader, attempted to quell the tensions vibrating within the party on Monday. McCarthy met with several members of the House Freedom Caucus on Monday, and Scalise apologized at a meeting to Florida Rep. Matt Gaetz for privately criticizing him in the immediate wake of January 6, 2021, according to sources in the room.

"There were factors beyond what Kevin McCarthy could deal with that affected this election," he added.

Some members of the far-right appeared assuaged.

"If we don't unify behind Kevin McCarthy, we're opening up the door for the Democrats to be able to recruit some of our Republicans," said Georgia Rep. Marjorie Taylor Greene.

Even before Biggs jumped in the ring, House members predicted that McCarthy would face a challenger who would expose that the California Republican does not currently enjoy enough support to become speaker next year.

During a closed-door leadership candidate forum on Monday, Virginia Rep. Bob Good, a McCarthy critic, complained that a Super PAC aligned with McCarthy opposed some pro-Trump candidates, and criticized McCarthy for not calling to congratulate him when he won his primary, according to a source in the room. McCarthy replied that he directed $2 million to Good for his race. Good had to be gaveled down in order to cut him off from speaking so they could move to the next question, the source said.

At the private intraparty meeting, McCarthy received a standing ovation from his colleagues. McCarthy promised that he would strip away power from Democrats, saying, if elected, he would kick Minnesota Democratic Rep. Ilhan Omar off the House Foreign Affairs Committee, and California Reps. Eric Swalwell and Adam Schiff off the House Intelligence Committee, according to a source in the room. And he underscored his role in returning Republicans to power.

"They don't give out gavels in small, medium, and large -- we have the majority and we have the gavels," McCarthy said at the meeting.

At one point, Gaetz asked McCarthy if he would try to solicit or accept speaker votes from any Democrats. McCarthy told him "no."

But McCarthy's allies have recently attempted to convince moderate Democratic Rep. Henry Cuellar to switch parties in hopes of padding their slim margins, according to two sources familiar with the conversation. Cuellar flatly rejected the idea. (McCarthy's spokesman said the GOP leader was not involved if these conversations took place and said this is not in any way part of their strategy for the majority or for his speakership bid.)

Gaetz, Good and Texas Rep. Chip Roy said on Monday that McCarthy does not have the votes he needs to become speaker.

"What I can tell you as I stand here right now is that Kevin McCarthy does not have 218 votes to become speaker," said Gaetz. "I don't think he has 200."

Still, McCarthy and Scalise appear to be in command of their leadership races, while the No. 3 House GOP position remains up for grabs, which would be the role of House majority whip, if Republicans win control of the chamber.

At the private forum, Minnesota Rep. Tom Emmer, the National Republican Congressional Committee chair, was pressed on his vote in support of a bill to codify same-sex marriage earlier this year, according to a source in the room. His response: "These divisive social issues shouldn't be brought to the House floor."

Emmer is running against Reps. Jim Banks of Indiana, the Republican Study Committee chair, and Drew Ferguson of Georgia, the chief deputy Whip, for the post.

This story and headline have been updated with additional developments Tuesday.