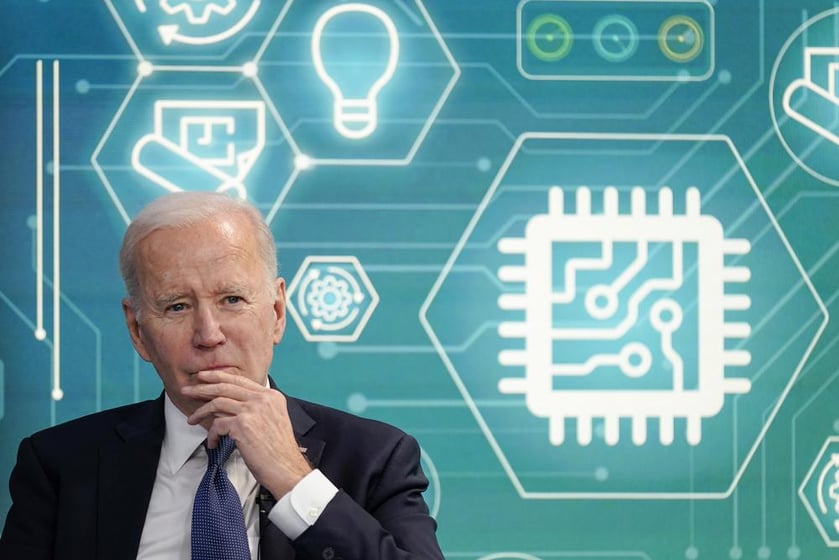 WASHINGTON (AP) — The Biden administration’s move to block exports of advanced computer chips to China is signaling a new phase in relations between the globe’s two largest economies — one in which trade matters less than an increasingly heated competition to be the world’s leading technological and military power.

The aggressive move, announced last month, will help set the tone for President Joe Biden’s upcoming meeting with Chinese President Xi Jinping on Monday on the sidelines of the Group of 20 summit in Asia. It’s evidence of Biden’s determination to “manage” the U.S. competition with China, whose officials were quick to condemn the export ban.

After more than two decades in which the focus was on expansion of trade and global growth, both countries are openly prioritizing their national interests as the world economy struggles with high inflation and the risk of recessions. The U.S. and China have each identified the development and production of computer chips as vital for economic growth and their own security interests.

Xi responded to the export ban in his statement at last month’s congress of the Chinese Communist Party, where he secured a third term as the country’s leader. He pledged that China would move more aggressively to become self-reliant in producing semiconductors and other technologies.

“In order to enhance China’s innovation capacity, we will move faster to launch a number of major national projects that are of strategic, big-picture and long-term importance,” Xi said.

The Chinese government has named the development of advanced computer chips that could handle everything from artificial intelligence to hypersonic missiles as one of its top priorities. To bridge the gap until it can get there, China has been relying on imports of advanced chips and manufacturing equipment from the U.S., which imposed a series of export controls last month that block sending to China the world’s most advanced chips, factory equipment and industry experts tied to America.

The U.S. and its allies famously deployed export controls against Russia after the February invasion of Ukraine, making it harder for Russian forces to be resupplied with weapons, ammunition, tanks and aircraft. As a result of those constraints, Russia has relied on drones from Iran and the U.S. has accused North Korea of supplying them with artillery.

The U.S. had until recently operated from the premise that strong trade relationships would bring countries closer together in ways that made the world safer and wealthier, a post-Cold War order. Global supply chains were supposed to lower costs, boost profits and enable democratic values to seep into the terrain of oligarchies, dictatorships and autocracies.

But after a global pandemic, the war in Ukraine and China’s own ambitions, the Biden administration and many European and Asian allies have chosen to prioritize national security and industrial strategies. Both the U.S. and European Union have provided tens of billions of dollars in incentives to spur more domestic production of computer chips.

In a speech last month at IBM, Biden said China specifically lobbied against a law that provides $52 billion to produce and develop advanced semiconductors in the U.S., an incentive package that has been followed by a string of announcements by Intel, Micron, Wolfspeed and others about the construction of computer chip plants in the U.S..

He said that some of the GOP lawmakers who opposed the measure had bought into the arguments made by China.

“The Communist Party of China was lobbying in the United States Congress against passing this legislation,” Biden said. “And unfortunately, some of our friends on the other team bought it.”

Donald Trump had fiery rhetoric on China during his presidency, imposing tariffs that the Biden administration has yet to lift. But by any qualitative measure, the export bans on computer chips are much tougher than anything imposed by Trump, said Gregory Allen, a senior fellow in the strategic technologies program at the Center for Strategic and International Studies.

Allen said the Trump-era tariffs were large in terms of dollars, but they had almost no affect on the balance of trade. Nor were the import taxes strategic. The export controls imposed by the Biden administration would be a setback for Chinese technology that is already decades behind the U.S.

“We have essentially committed ourselves to saying: China you will not achieve your number one goal,” Allen said.

The era of China, Russia and other competitors having relatively unfettered access to U.S. and European markets appears to be ending, said Christopher Miller, a Tufts University professor and author of the book, “Chip Wars.”

“The risks posed by these countries has grown, so Western leaders have reconsidered the wisdom of giving adversaries open access to their markets,” Miller said.

Instead of trying to work together as a single global economy, new alliances are being formed such as the Quad (Australia, India, Japan and the U.S.) and existing partnerships such as NATO are being expanded. Economic integration among these partners has become essential, as the U.S. export controls on advanced chips need support from other producers in Japan and the Netherlands.

“All the great powers are restructuring international economic relations in ways they hope will improve their geopolitical position,” Miller said. “Semiconductors are just one of many arenas in which trade, tech, and capital flows are being re-politicized due to great power rivalry.”