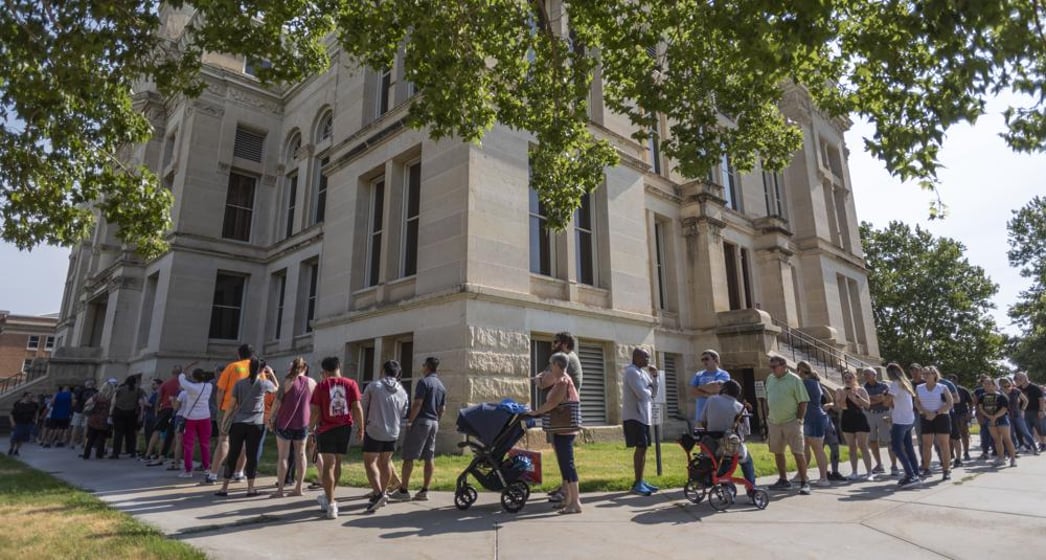 FILE - A long line of voters wraps around the Sedgwick County Historic Courthouse in Wichita, Kan., on the last day of early voting on Aug. 1, 2022. (Travis Heying/The Wichita Eagle via AP, File)

TOPEKA, Kan. (AP) — Kansas’ top elections official warned voters Monday that text messages from outside the state were giving them incorrect information about where to vote, but groups involved in the texting said they weren’t trying to confuse or mislead people.

Several Democrats said they began hearing about the texts Sunday or had received them. Each message said it was from a representative of Voting Futures, Voto Latino or Black Voters Matter and provided the address of a voting site, with a picture of a building. In some cases, the person already had voted; in others, people couldn’t vote in advance at the listed site, and in some, people could vote in advance there, but not on Election Day, Nov. 8.

Kansas Democrats who learned of the texts worried that a disinformation campaign had targeted their voters in hopes of preventing their ballots from counting or discouraging them from voting. And Kansas Secretary of State Scott Schwab, a Republican, said voters should be on “high alert” about potential election misinformation from such texts.

Voting Futures later said in follow-up texts that its information may not have been correct. Voto Latino said the problem was a vendor’s “database issue,” without naming Movement Labs, and said voters would receive corrected information.

Both Black Voters Matters and Movement Labs said that group had not endorsed the texts.

“We are deeply sorry for the confusion that these text messages created and have taken steps to correct this situation,” Black Voters Matter said. “The last thing we ever want is for our outreach to be confused with intentional disinformation which is sometimes targeted to our communities.”

Movement Labs said in separate tweets for Voto Latino and Black Voters Matter: “We take full responsibility for these mistakes and have issued correction texts.”

Kansas counties began allowing people to vote in advance in-person Oct. 19, and people don’t need a reason to request a mail ballot. While mail ballots must be postmarked Nov. 8 or before, they can still be counted if they arrive in election offices by Nov. 14.

Democrats and abortion rights advocates have been watching for misinformation after deceptive texts went to voters on the eve of a statewide vote Aug. 2 decisively rejecting a proposed anti-abortion amendment to the Kansas Constitution. The texts falsely told voters that a yes vote would protect abortion rights, when the opposite was true.

Schwab said in a statement that his office doesn’t use third parties to send information to voters and urged them to contact state and local officials if they have questions, or go to the VoteKansas.gov website.

Voters across the state reported that they started receiving texts Sunday from the three groups about where they could vote, including in the Kansas City area, Wichita and Topeka.

“Voting should be accessible to people and straight-forward, and this complicates that,” said Alexis Simmons, the Kansas House Democrats’ communications director, who received two of the texts Sunday. “Voting should be empowering.”