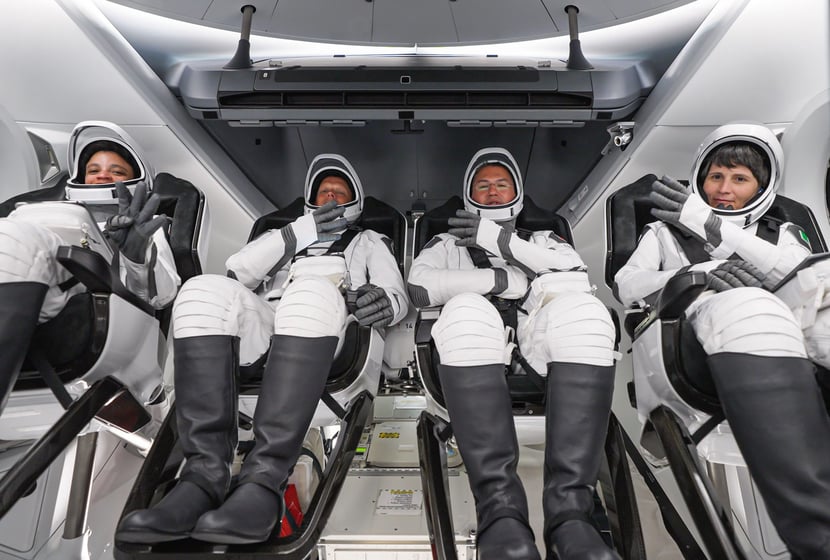 (CNN) -- Four astronauts boarded a SpaceX Crew Dragon capsule and returned home from the International Space Station on Friday, bringing an end to their nearly six-month stay aboard the orbiting laboratory.

The astronauts — NASA's Kjell Lindgren, Bob Hines and Jessica Watkins as well as Italian astronaut Samantha Cristoforetti with the European Space Agency or ESA — shared goodbye hugs with other astronauts on the space station and strapped into their spacecraft around 10 a.m. ET.

The Crew Dragon spacecraft left its docking port at the ISS around noon ET and made a gradual trek home toward the edge of Earth's thick inner atmosphere. Then, the capsule lit up its thrusters again to orient itself as it began its reentry. This step began to slow the spacecraft from its orbital speed of about 17,500 miles per hour (28,164 kilometers per hour). A heat shield kept the astronauts protected as the fiery swoop back toward Earth heated the spacecraft's exterior to more than 3,000 degrees Fahrenheit (1,650 degrees Celsius).

A plume of parachutes then slowed its descent further before it came to a splashdown landing off the coast of Jacksonville, Florida, just before 5 p.m. ET.

The crew was initially scheduled to depart the space station Wednesday evening, but ground crews waved off that attempt due to rough weather. Storms also dashed a second attempt at the return Thursday morning.

This mission, called Crew-4, has marked a historic first, with Watkins becoming the first Black woman to join the space station crew for an extended stay.

During their stay, the astronauts conducted science experiments, including research on how to grow vegetables in space without soil and the study of spaceflight effects on the human body.

Those experiments are designed to help astronauts understand how they may one day grow their own food and how their bodies may react on missions deeper into space, such as on NASA's planned Artemis moon missions, Watkins said during a news briefing last week.

"It's been awesome to be able to walk into the Columbus module and smell the smell of leaves growing, of plants growing," Watkins told reporters.

Cristoforetti, who was on one previous mission to the space station in 2014-2015, is the sole woman in ESA's astronaut corps, and she made history of her own on this mission. Last month, she took over as commander of the space station, becoming the first European woman to do so.

Cristoforetti also conducted a spacewalk in July to deploy small satellites and work on the installation of a new robotic arm on the space station's exterior.