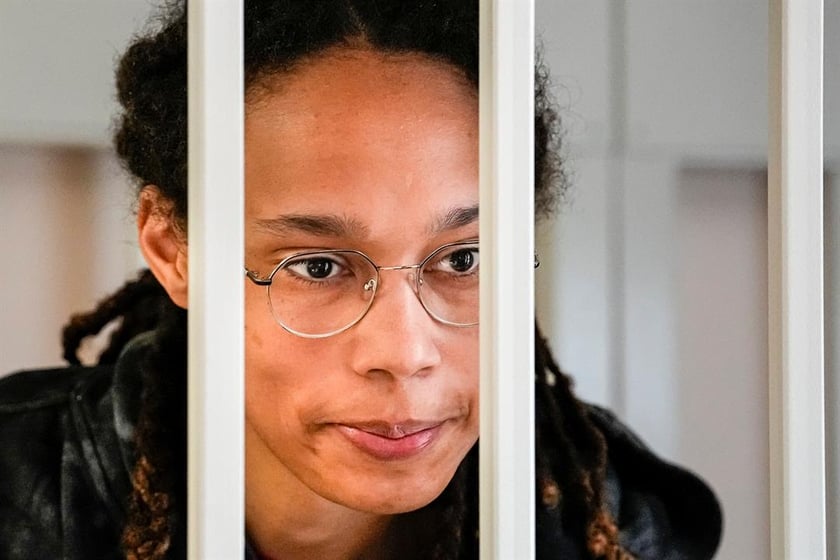 WNBA star Brittney Griner, who has been detained in Russia for over five months, was found guilty on drug charges in a Moscow-area court Thursday. She was then sentenced to nine years in prison.

The judge found that Griner had criminal intent and said she is guilty of smuggling and storing illegal drugs.

Griner, a 31-year-old Houston native who plays professional basketball for the Phoenix Mercury, was detained on Feb. 17 at Sheremetyevo International Airport in Khimki as she returned to Russia to play during the WNBA's offseason after she was accused of having vape cartridges containing hashish oil, which is illegal in the country.

The two-time Olympic gold medalist, who appeared in court Thursday for the final hearing in her trial, was facing up to 10 years in prison although 9 1/2 years is the maximum sentence with time served. Griner has a right to appeal.

Griner shared an emotional statement in court ahead of the verdict on Thursday morning.

She apologized to her loved ones for the hurt that her detention has caused and said that her parents instilled hard work in her and this value is what brought her to Russia.

Many WNBA players have traveled around the world to play in the offseason because they don’t make enough money during the season -- an issue that is not as prevalent for NBA players. The top WNBA salary is $228,000 per season, whereas star NBA players make over $20 million a year.

The Phoenix Mercury star held up a photo of her Russian teammates on Thursday and said that she made "an honest mistake" by packing the vape cartridges in her bag.

The prosecutor argued that Griner's guilt has been proven and also asked that Griner pay a $16,500 fine, which is about 1 million Russian roubles.

Griner pleaded guilty to drug charges in court last month, saying that the vape cartridges containing hashish oil were in her luggage mistakenly and that she had no "intention" of breaking Russian law.

Her legal team told ABC News in a statement last month that her "guilty" plea was recommended by her Russian attorneys.

"Brittney sets an example of being brave. She decided to take full responsibility for her actions as she knows that she is a role model for many people," the lawyers said in the statement. "Considering the nature of her case, the insignificant amount of the substance and BG's personality and history of positive contributions to global and Russian sport, the defense hopes that the plea will be considered by the court as a mitigating factor and there will be no severe sentence."

Griner testified last week that she did not mean to leave the cartridges in her bag, but that she was in a hurry and was stressed after recovering from COVID-19 that month. The WNBA star said she was aware that the U.S. had warned Americans about traveling to Russia, but she didn't want to let her team down in the playoffs.

She also testified that she has permission to use medical cannabis and used a certificate to buy it in the U.S. Earlier this month, one of Griner's attorneys presented a letter from an American doctor in court, giving her permission to use cannabis to reduce chronic pain.

The American basketball star said she was pulled aside after inspectors at the airport found the vape cartridges in her luggage and that when she was detained, she was not offered an explanation of her rights or access to an attorney. Griner said that while there was a translator present, she was not offered a complete translation and even tried to use her phone to translate.

Russia's invasion of neighboring Ukraine began one week after Griner was detained, and some officials have expressed concern that Americans jailed in Russia could be used as leverage in the ongoing war.

The U.S. Department of State has classified both Whelan and Griner as "wrongfully detained."

Last week, in a sharp reversal, U.S. Secretary of State Antony Blinken announced that he will hold a call with Russian Foreign Minister Sergey Lavrov "in the coming days" to discuss securing the freedom of Griner and former U.S. Marine Paul Whelan, who has been detained in Russia since late 2018.

"[They] have been wrongly detained and must be allowed to come home," Blinken told reporters in Washington, D.C, on July 27. "We put a substantial proposal on the table weeks ago to facilitate their release. Our governments have communicated repeatedly and directly on that proposal, and I'll use the conversation to follow up personally and I hope [to] move us toward a resolution."

Two days later, Blinken told reporters that he had a "frank and direct conversation" with Lavrov about a U.S. proposal to exchange convicted arms dealer Viktor Bout in return for Griner and Whelan's freedom.

"I pressed the Kremlin to accept the substantial proposal that we put forth on the release of Paul Whelan and Brittney Griner," Blinken said. "I'm not going to characterize his responses and I can't give you an assessment of whether I think things are more or less likely, but it was important that [he] hear directly from me on that."

During a press conference in Moscow on July 28, Russian Ministry of Foreign Affairs spokeswoman Maria Vladimirovna Zakharova confirmed that "the issue of mutual exchange of Russian and American citizens, staying in places of detention on the territory of the two countries, was discussed at one time by the presidents of Russia and the United States," but "a concrete result has not yet been achieved."