Aftershocks move on to TBT quarterfinals 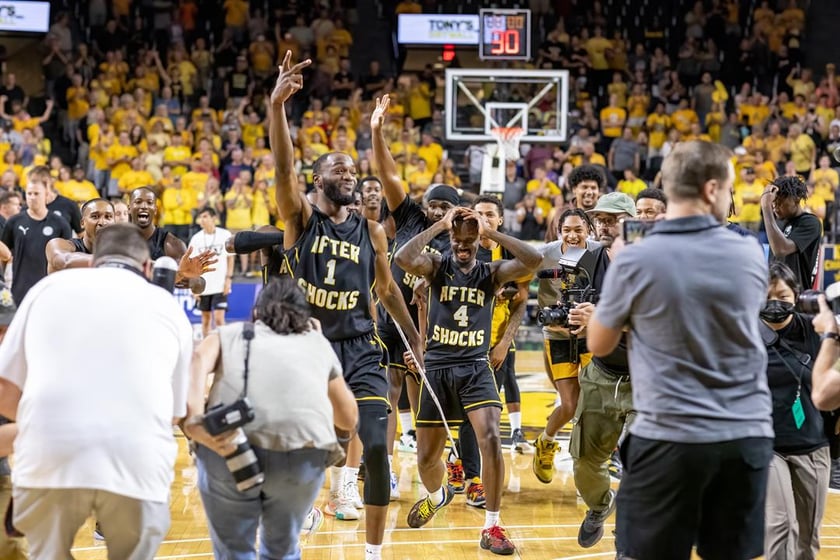 WICHITA, Kan. (KAKE) - The AfterShocks make it back-to-back years at Wichita regional champions in the TBT with an instant classic 70-69 win over Bleed Green.

After two impressive wins from both teams, the Wichita State and North Texas Alumni teams met at Charles Koch Arena Monday night for the TBT Wichita Regional Championship game. On the WSU side, the Aftershocks, led by Conner Frankamp (15.5 ppg), took down “We Are D3” and the “Air Raiders” this past weekend to advance to tonight. For UNT, Bleed Green, led by Brandon Jefferson (20 ppg), took down “Eberlein Drive” and “Purple and Black” to make the final as the underdog 7 seed. This game was set up to be a competitive battle, with both squads playing great defense and unselfish offense throughout the tournament.

The Aftershocks started the game exactly how they did the last two nights: on fire. After a couple of early James Dickey layups, the Shocks began trapping Bleed Green every chance they got. One eventually led to a Rashard Kelly breakaway dunk that had the 5,000 Shocker fans fired up, causing a timeout from Bleed Green just two minutes into the game. Coming out of the timeout, the Green settled in just fine. The Shocks couldn’t keep that energy up forever, and Bleed Green could not seem to miss from long range, with Jefferson being the leader of that. After a little back and forth, the Aftershocks eventually gained back the lead off of two threes from James Woodard off the bench to put them up 20-14 heading into the second quarter.

The end of the first quarter was very chippy and competitive from both sides, with guys starting to talk some trash and starting to talk to the referees a little as well. The intensity was rising fast, which is exactly what you want to see in a Championship game. There was no doubt that this game meant something to these guys. The second quarter kept up that intensity from start to finish. The crowd on hand was electric, a huge reason why the Shocks were able to keep their lead. The defense was on another level in this quarter, with both teams holding the other to poor shooting percentages. But the Shocks were ice cold, and the Green managed to hit a couple three pointers down the stretch of the first half. After a huge run by Bleed Green to put them up by two, Frankamp ended the scoring drought for the Aftershocks, hitting a nifty left-handed layup at the halftime buzzer. The game was knotted up at 30 heading into the break, with Jefferson holding a game high 9 points for the Green.

The start of the third quarter was an offensive clinic. The Shocks scored as many points in 2 minutes this quarter than they did all of last, and everyone was pitching in. Six different Shocks scored to open the quarter, causing the Green to take a timeout only 4 minutes into the half. The Shocks’ offensive explosion had given them a 47-40 lead at this point, with Kelly leading them in scoring with 7 points. The Aftershocks continued to dominate the quarter from here, capitalized by a reverse 360-dunk (check SportsCenter Top 10 for that one) by Markis McDuffie, and a step back jumper as time expired by Darral Willis Jr. The Shocks were cruising, leading 55-45 going into the fourth quarter, ending the third on an 8-0 run.

The Aftershocks did not let off the gas pedal. The Green started getting sloppy with the ball, and the Shocks were executing their offense to perfection. Every single player but one on the Aftershocks roster scored a point tonight, but Jordan Stevens wasn’t letting up just yet. He scored 8 straight points and drilled two threes to cut the lead to just three. After a Kelly layup and the under 4-minute timeout, the ELAM Ending target score was set at 70, with the Aftershocks leading 62-57. The ELAM Ending started off with the dynamic duo of Bleed Green, Jefferson and Stevens, hitting two unbelievably tough threes. After an Aftershocks timeout, the unlikely hero in Clevin Hannah continued to come up big for the Shocks, putting them back up by 1 with a beautiful euro step and finish in traffic. Frankamp got fouled on a three and made all three free throws, but Jefferson and Stevens struck again, each of them hitting another three pointer at a ridiculously high degree of difficulty. Jefferson finished with 18 points, and Stevenson finished with 25. Bleed Green led 69-68, but the Aftershocks had the ball with a chance to win it. They got the ball to Willis Jr. inside, and he did the rest. A beautiful looking turn around jump hook to win it for the home crowd, which had to be the loudest arena so far here in the TBT. Great job by you, Wichita. Willis Jr. led the Shocks in scoring with 11, but it was a team effort by the former Wichita State stars, and an incredible one it was.

The Aftershocks will be back at Charles Koch Arena Wednesday night to take on the “Gutter Cat Gang” with a chance to advance to the semifinals in Dayton, Ohio, one step closer to the $1 million prize.