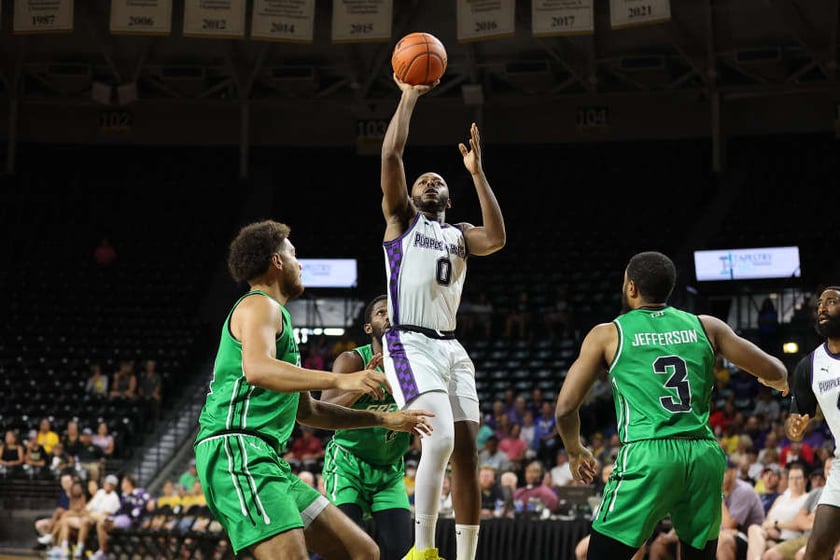 WICHITA, Kan. (KAKE) - A week where K-State legends returned to don the colors once more came to an end today as K-State's alumni team fell to North Texas' Bleed Green in the second round of The Basketball Tournament 87-62.

After a highly competitive back and forth matchup capped off by a Jacob Pullen game winning three-pointer, the Kansas State alumni basketball team, “Purple and Black”, moved on to today’s regional semifinal game against “Bleed Green”, an alumni team from North Texas University.

The Green shocked the fans here in Wichita yesterday by upsetting the region’s #2 seed “Eberlein Drive” in another competitive matchup. Back at Charles Koch Arena, the former Wildcat stars looked to give this K-State heavy crowd another exciting victory.

The game started as another back and forth matchup for both teams. Thomas Gipson III was big for the Cats early, knocking down a couple of jump hooks in the early possessions. Mike McGuirl added a couple of makes from behind the arc, and Jacob Pullen hit one at the buzzer to tie it up at 22 heading into the second quarter.

The competitiveness of the game was high in the first quarter, but unfortunately for the Purple and Black, Bleed Green started to run away with things in the second. The Green caught fire from downtown, and the Cats couldn’t find the defensive tenacity to slow them down.

Bleed Green knocked down four three’s in the quarter, and seemingly hit every shot inside. Pullen and McGuirl went cold, while Jordan Stevens and Brandon Jeffereson lit it up for Bleed Green. The Cats faced a huge deficit heading into the half, trailing the Green 53-31.

The Purple and Black needed to come out with some better energy to start the second half, and they did just that. They scored 17 points in the third quarter, all of them by McGuirl, Gipson or Pullen.

They cut the lead to 12 five minutes into the quarter, but with all of their production coming from just three guys, it was hard to do much better than that. They played better on the defensive end, but Bleed Green was still able to knock down a couple three pointers, with Jefferson adding another one to his impressive statline. The Cats faced a 67-48 deficit heading into the fourth quarter.

Both teams went cold offensively to start the fourth, and some sloppy play with the ball on both sides. Jefferson continued to light it up for the Green, drilling a three from the corner for their first points of the quarter, and knocking down another one before the under 4 minute timeout.

This would bring out the ELAM Ending target score, which was set at 87 behind a 79-58 lead by Bleed Green. McGuirl was the man for the Cats in the second half, as he had a team high 18 points coming out of the timeout. As the crowd tried to rally the Purple and Black back into it, the Green were simply just too much tonight for the Cats.

Behind 21 points and five three’s from Brandon Jefferson, Bleed Green rolled to a 87-62 victory over Purple and Black. Although Jacob Pullen only recorded three made field goals tonight and ended up walking away with a loss, he brought basketball excitement back to K-State fans last night, and gave them a weekend to remember.

Bleed Green will take on the winner of the Aftershocks and the Air Raiders tomorrow night back here at Charles Koch Arena.