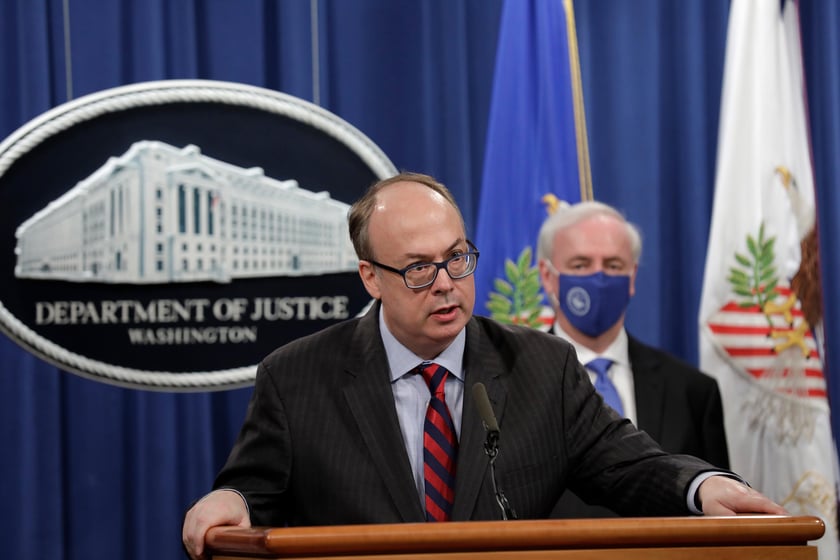 Clark is the former DOJ lawyer who former President Donald Trump sought to install as attorney general in the days before the January 6 Capitol riot as top officials refused to go along with his vote fraud claims.

He was at the center of an effort by Trump to get the Justice Department to falsely claim there was enough voter fraud in Georgia and other states that he lost, in a last-minute bid to help sow doubt about Joe Biden's victory and pave the way for him to remain in power.

A spokesman for the US Attorney's Office in Washington confirmed that "there was law enforcement activity in the vicinity" of Clark's home but declined to comment on any particular person or activity.

Attorneys for Clark didn't respond to requests for comment.

The Center for Renewing America, where Clark works, confirmed the search at Clark's house, calling it a "weaponization of government."

"The new era of criminalizing politics is worsening in the US. Yesterday more than a dozen DOJ law enforcement officials searched Jeff Clark's house in a pre-dawn raid, put him in the streets in his pajamas, and took his electronic devices. All because Jeff saw fit to investigate voter fraud. This is not America, folks," the group's president Russ Vought, the former Office of Management and Budget director under Trump, said in a statement. "The weaponization of government must end. Let me be very clear. We stand by Jeff and so must all patriots in this country."

Clark had met with the House select committee investigating January 6 back in February, but pleaded the Fifth Amendment more than 100 times during his nearly two hours-long deposition.

He was a Trump-appointed environment law chief at the Justice Department who in December 2020 became the assistant attorney general for the Justice civil division.

Clark and his efforts to help the Trump campaign subvert the 2020 presidential election are expected to be a focus of Thursday's January 6 committee hearing.

In December 2020, Clark circulated a draft letter among Rosen and other DOJ leadership that he wanted to send Georgia officials and eventually similar versions to "each relevant state." The letter, which was published by ABC News last year, falsely said that prosecutors had found "significant concerns" with the election results and urged Georgia Republican Gov. Brian Kemp to call a special session of the state legislature to appoint pro-Trump electors.

Clark also promoted conspiracy theories within the Justice Department, such as that Chinese spies used thermometers to tamper with US voting machines, according to internal emails made public in a Senate Judiciary Committee 2021 report.

In the days before January 6, Clark helped Trump devise a plan to oust then-acting Attorney General Jeffrey Rosen, place himself atop the department, and have the DOJ intervene in Georgia to set aside its voting results in order to sway the state toward Trump.

During a dramatic January 3, 2021, Oval Office meeting, Rosen, his then-deputy Richard Donoghue and the head of the Office of Legal Counsel Steven Engel all threatened to resign in protest, leading Trump to ultimately back away from the plan to install Clark as attorney general.

"I made the point that Jeff Clark is not even competent to serve as the Attorney General. He's never been a criminal attorney. He's never conducted a criminal investigation in his life. He's never been in front of a grand jury, much less a trial jury," Donoghue said in a video deposition clip that was played Thursday during the House select committee hearing, recalling what he told Trump during the critical Oval Office meeting.

Donoghue said he told Clark, "You're an environmental lawyer. How about you go back to your office, and we'll call you when there's an oil spill."

Trump White House lawyer Eric Herschmann said Clark was repeatedly "clobbered over the head" during the meeting. He said that he explicitly told Clark that he was breaking the law, according to his videotaped deposition with the committee, a clip of which was played on Thursday.

"F---ing a—hole, congratulations, you just admitted your first step or act you would take as attorney general would be committing a felony," Herschmann said.

This story has been updated with additional details.