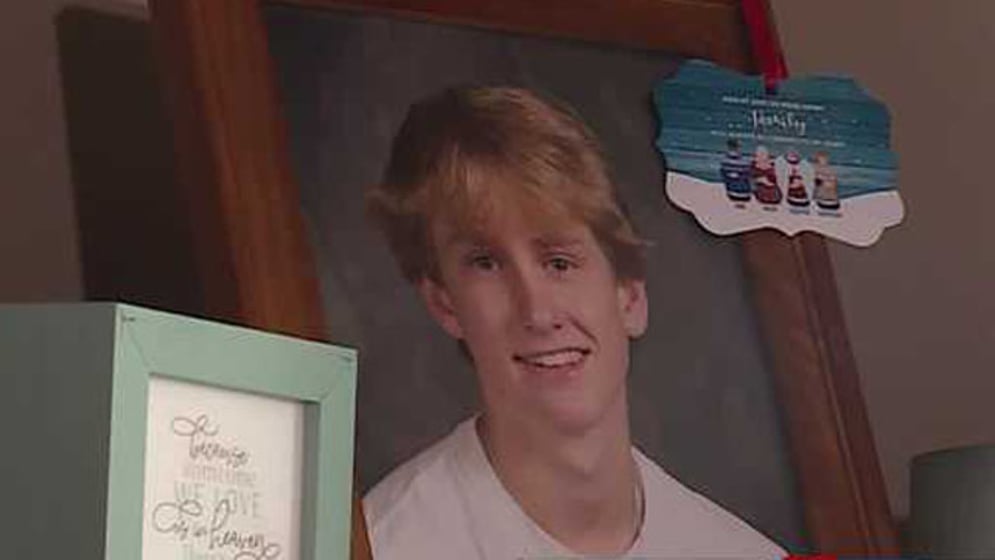 SHAWNEE, Kan. (KMBC) -- A billboard now stands tall over Interstate 70 near the Kansas Speedway in Kansas City, Kansas with an important warning about the dangers of fake prescription pills.

“One decision, one pill, one time is all it takes,” the billboard says.

Cooper Davis, 16, is pictured along with that message. The Mill Valley High School junior died last year of fentanyl poisoning.

“What's important to us and the foundation that we've started is to use Cooper's tragic story to save someone else's life,” said Cooper’s mother Libby Davis in her Shawnee home.

She and her husband Randy last year set up a foundation to honor Cooper’s memory and spread awareness about fake prescription pills.

They talk about the dangers of fentanyl through social media and a campaign called Keepin’ Clean for Coop.

It is a message they hope can save lives.

The Davis’s keep several pictures of Cooper around their home, remembering his outdoor adventures and his fearlessness.

Randy Davis said his son “loved to live,” saying he would have never taken a pill had he thought it had a chance of killing him.

Cooper, the Davises say, took half a fake prescription Percocet pill on a Sunday afternoon last August with his friends.

They received the pills from a drug dealer in Missouri after initial contact on Snapchat, Libby Davis said.

“The four boys shared the two pills that they had gotten,” Davis said. “And three boys survived, and Cooper did not.”

Cooper’s toxicology report showed three things in his system. Caffeine, Narcan (the drug paramedics gave him to try and resuscitate him) and Fentanyl.

There was no trace of Percocet.

It is why the Davis family does not call Cooper’s death an accidental overdose.

Randy Davis is a nurse anesthetist. He administers fentanyl to patients through IV’s daily in his job saying he was surprised to see fentanyl produced in crystallized chemical form.

“I’ve studied. It doesn’t come that way,” he said. “It comes through IV, and that’s where it was the shocking thing for me.”

He said he generally gives 100 to 250 micrograms of fentanyl in a clinical setting.

“This is 2000 micrograms that are in these pills,” he said. “That would kill more than one person, a lot of times, especially if you are opioid naïve.”

The Davis family has received help from the U.S. Drug Enforcement Administration to spread awareness about the dangers of fake prescription pills laced with fentanyl.

The DEA recently showed KMBC 9 Investigates the small amount of fentanyl it can take to kill someone inside a Chicago lab, while saying fake prescription pill seizures are on the rise in both Kansas and Missouri.

The agency and the Davis’s have already spread awareness through assemblies at Mill Valley and De Soto high schools. They hope to add more school talks, soon.

The Keepin’ Clean for Coop campaign is advocating for additional mental health support and curriculum inside schools surrounding the dangers of fentanyl to help reach students before it is too late.

“We wanted them to remember his story always,” Libby Davis said.

They are also planning a Fighting Fentanyl 5K, partnering with the DEA to help spread awareness and education to the community.