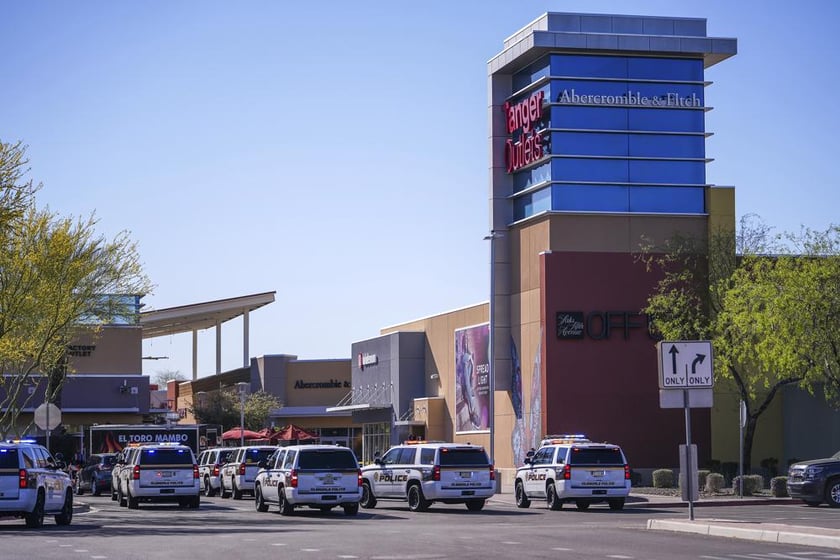 GLENDALE, Ariz. (AP) — Five people including a young child were injured Wednesday when an altercation at a Phoenix area outlet mall erupted in gunfire and sent hundreds fleeing.

The incident at Tanger Outlets, a mall in a bustling entertainment district in the western suburb of Glendale, was “an altercation between two groups of people” that turned into a fight and then a shooting, said Glendale police Officer Tiffany Ngalula.

Police said a young man armed with a handgun was with a woman and a small child at the mall. The man got into an altercation with a group of young men known to him and a shooting occurred, according to police.

According to police, two juvenile males in the second group arrived at hospitals with gunshot wounds and the man with the woman and child were transported to a hospital for treatment of undisclosed injuries.

The names of the five people injured weren’t immediately released.

Hundreds of people who fled the gunfire as well as nervous friends and relatives who rushed to the scene were lined up in parking lots near the mall hours after the shooting.

The mall and surrounding businesses remained on lockdown as police searched and cleared stores where people took cover. Ngalula said officers still had hundreds of people to interview, a task that would likely last long into the night.

Police at a checkpoint in the mall’s parking lot could be seen stopping motorists and inspecting the trunks of vehicles exiting. At another location yellow crime scene tape was strung just outside a mall entrance.

Officers from around the region responded after reports of gunfire around 2:40 p.m. in an outdoor courtyard at the mall. The mall is across a parking lot from the Westgate Entertainment District and a few streets away from the Arizona Cardinals’ football stadium and Arizona Coyotes’ hockey arena.

Gov. Doug Ducey said he was monitoring the situation.

“Once again Arizona law enforcement officers demonstrated courage in keeping our community safe,” Ducey wrote on Twitter. “Thank you to all the men and women in blue for your bravery and service.”

The shooting comes nearly two years after a gunman injured three in a rampage at Westgate.

The 20-year-old suspect in that shooting, Armando Hernandez, reportedly walked through the entertainment district, returned to his car to make a social media video and loaded three rifle magazines. Glendale police said the gunman filmed the attack while holding a cellphone with his left hand and blasting away with the rifle in his right hand.

Hernandez has pleaded not guilty. His case is scheduled for trial in June.