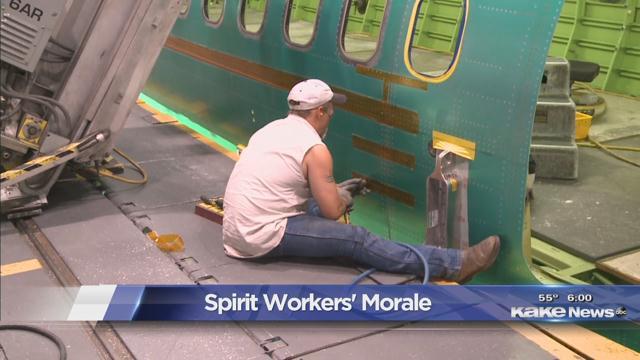 Less than a week ago, Spirit announced the layoffs of more than two thousand workers. Now, some employees are coming together on social media looking for ways to stay on the job.

With decreased manufacturing, some employees are fighting for their rights. A Facebook group created just three days ago, "Aerospace Workers United Against Boeing." More than 1,200 members hoping to work with an attorney.

But not every employee wants to take this route. "I don't think that's the general attitude. I think the people here at spirit, they do their jobs to the best of their ability," says Jeff Branine, assembly worker at Spirit.

With change comes more caution. Workers say Spirit increased security just yesterday morning for all assembly line employees. "I don't think they're worried about us bringing in anything that we shouldn't bring in, but at the same time, they are securing the things that belong to them for those who may not be returning," says Kenneth Young, assembly worker at Spirit.

Even though not all workers are on the same page, most we talked to are trying to stay optimistic. "It's kind of out of our control, but I'm sure they'll get it straightened out and everything will be good to go," says Branine.

Spirit workers say the company gave them a 60 day notice and all layoffs will be presented to each employee on January 22nd.