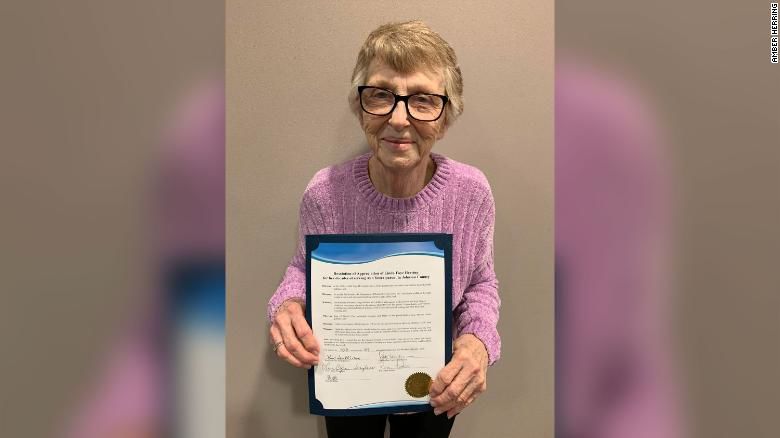 Linda Herring always wanted a big family. But she never imagined that she would foster more than 600 children and turn her home into a safe haven where every child was given shelter, food, clothing, and most importantly, endless amounts of love.

Herring and her husband, Bob, began fostering when they lived in Oxford, Iowa, and continued to do so after they moved to Tiffin.

"My best friend was doing foster care for teenage girls and I thought, 'Well, that would be nice to do the same,' but I wanted little kids," Herring told CNN. "So, I talked to the Department of Human Services and agreed to take kids with medical needs."

As a foster mom, Herring ran a home daycare for local families and worked as a night custodian in a nearby high school. If that wasn't enough, she also volunteered as a first responder for nearly 50 years

Herring was known by everyone in Johnson County for never turning away a child, no matter their age, gender, or special needs, and would regularly travel to pick up foster children who needed a home.

Herring is not just a foster mom. For her eight children, three of which were foster children she and Bob adopted, she was just "Mom."

One of those children is 39-year-old Anthony Herring. He was 6 months old when he was placed in the Herring household. When he was 3 years old, the Herring family officially adopted him.

"I appreciate being adopted even more today as a parent then I did when I was a child," Anthony Herring told CNN. "I'm forever grateful for the life I was given. She and Dad have both taught me that family isn't determined by blood, it's who you have in your life to love."

He said that his mom taught him how to appreciate and understand children with special needs.

Two of Herring's adopted foster children have severe medical and special needs. One of them, Dani, is fully dependent on others for care. While Dani wasn't expected to live long after her birth, she is now 29 years old.

Herring passed on what she likes to call her "foster care trait." Four of her biological children have fostered children, and three of them followed their parents' footsteps and adopted kids of their own. Three of her grandchildren fostered children as well.

"It's hard to say in words her impact. She was always available and ready for a child in need. These kids were usually taken from a traumatic situation and she'd take them in, provide a warm bed, clean clothes, warm meals, and love," Anthony said.

"She also worked hard to keep families together. Keeping siblings together. Helping biological parents make the changes needed to be able to keep their children. She always makes sure a new child in her home was given a professional photograph that was placed on the wall in the living room. That seems like a small thing, but it helps them feel like they're at home."

Everything comes from love

When it comes to Herring's inspiration to foster children, she had one explanation: love.

"I would just love (my foster kids) just like they were my own, probably more than I should," Herring said.

"I cried when the kids would leave my home, no matter how long they had been there. It was so hard for me to say goodbye to them. I always questioned, 'Why do I keep doing this?' because it was never easy to say goodbye to a child. But I kept doing it because I had so much love to give to these children in need."

Herring carries with her memories of each child that she has protected and loved. Once, she said, she was called in by DHS in the middle of the night to pick up three young children who had been abandoned.

Another memory is the look on the face of a young girl she fostered when she saw her brand-new clothes, the first new clothes the little girl said she was ever given.

While Herring's time as a foster parent is over, she enjoys the photos and cards she receives from the children she fostered after they've been adopted. Her favorite part is when her foster children come back to visit after they've grown up.

Herring's impact as a foster mom went beyond the children she took in. Tonya Stratton, whose mother was one of Herring's foster children, grew up calling Herring "Grama Linda" and spending her childhood making friends with Herring's foster kids.

"Grama Linda, it's now your time to relax, but first you must learn the definition of that and then learn to sit without rocking, learn to appreciate quiet, no more piles and piles of laundry to fold, groceries to buy, diapers to change," Stratton said in a Facebook tribute to Herring.

"It's your time now to rest, go through your memories, put your feet up or take a nap and try to understand how incredibly worthy you are to do whatever the hell you want."

'She would meet anywhere to get a child'

After announcing her decision to stop, Herring was honored by the Johnson County Board of Supervisors, with a resolution of appreciation on Thursday.

"The Department of Human Services would call Linda in the middle of the night to take a child, and she would meet anywhere to get a child," the resolution said in recognition of Herring's efforts.

"Linda mostly fostered young children with special medical needs and kept bins of clothes in her garage, stacked to the ceiling, labeled by size and gender. No one had to worry about a child going without clothes at Linda's, even if they arrived with nothing but what they're wearing."