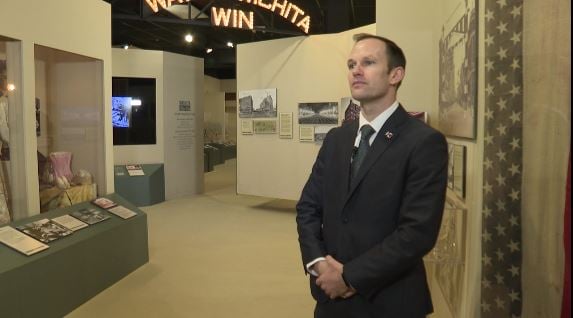 As Wichita’s new mayor, Brandon Whipple, looked through Wichita’s past inside the Old Sedgwick County Museum, he was quick to start talking about the future.

“I’m walking into this, knowing the facts, knowing that I’m not being handed any type of rosy picture.”

He campaigned last year on public safety, ethics and transparency in government. But then Textron announced layoffs and so did Spirits. While those are largely cyclical moves by the companies involved they have the potential to bring short term problems to the city’s economy. Something he said he takes seriously.

“We have to make sure that we have a plan in place so that if these layoffs continue, we’ll be able to handle that,” Whipple told KAKE News Anchor Greg Miller. “I’m very worried about anything that could effect the economy to this extent. That’s why we’re putting together a plan, that we’re working with the private sector, public sector, utilizing connections I’ve made in Topeka.”

In 2018, economist William Chung released a report in which he said “The Wichita Way Isn’t Working.”

According to his review, the city’s GDP had been flat for more than a decade while other cities across the nation rose 16 percent. Despite having 19,000 more adults than Des Moines, Wichita had 17,000 fewer people in the labor market. He went on to rank education and found that Wichita only attracts 50 percent of WSU grads, 7.6 percent of K-State grads and 3.6 percent of KU grads.

When Miller if he though the city’s economy was diversified enough, Whipple responded - “No, not at all.“

“What we can do in the future is, looking ahead, diversifying not just for the short-term but the long-term,” he said.

Long-term, his attention will likely also turn to the city’s crime rate. Whipple said after meetings with the department, he realized that 1/3 of all crimes committed in 2019 happened after he was elected. In 2020, it took just two days before police were working new homicide investigations.

“I’m working wit the police chief on policies that he believes will curb the trend,” he said. “It’s a layered problem. But a few things we can do – we have less officers on the ground than other cities our size. One of the ways we can get through this is community policing. When you have more officers who can spend time building relations in the community.”

Both the police union and the fire union endorsed Whipple last year and in May 2019, firefighters gave KAKE News a behind the scenes look at the tools and training they go through. At the time, they expressed concerns about low staff levels and shortages of vital pieces of equipment. Those factors likely led to the endorsement.

“It’s very urgent,” he said. “Our first responders aren’t just numbers on a spreadsheet. They are in the field doing what they’re calling is and that’s to save people.”

At Monday night’s swearing in, both he and the council promised to be unified. Whipple is aware there are those that disagree with him

“Even though I’m not sure anyone on that council actually voted for me (He later said he thought one or two did), we’re all on the same team,” he said.

A major in the coming weeks is Century II, and he agrees with his predecessor, Mayor Jeff Longwell.

“Where he’s made statement saying that we haven’t done enough to look at that full picture to figure out Century II,” he said. “Either if it’s utilized to the private market or the public market, what can we do with it.”

For years, the building has housed as much controversy as it has concerts. Some on the Legacy Master Plan have looked to tear it down. But Longwell and County Commissioner Michael O’Donnell are suspect that the facility has been thoroughly vetted and options explored. There’s now a petition underway to save the facility.

For now, Whipple insists he’s thinking about his current term and keeping people in the city who may feel isolated or want to leave.

“As the incoming mayor, a majority of Wichitans are about love. We are not people who discriminate, we want to make sure our policies mirror that.”