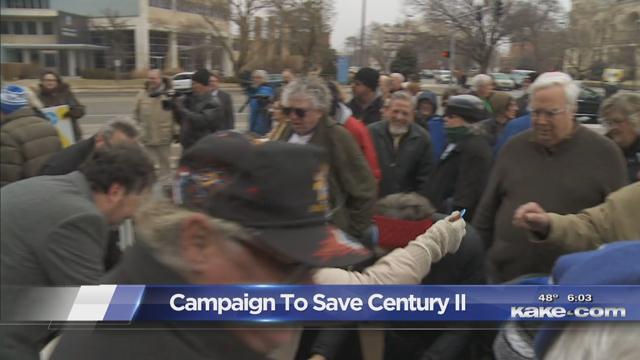 Dozens of people gathered outside of city hall in downtown Wichita on Monday all campaigning to save a landmark.

Century II supporters are hoping to get at least 12,000 signatures in the next 6 months. This could change a policy, allowing citizens to vote whether century II should stay or go.

"We’re taking back city hall. We have a new mayor, we’re kicking off a voter petition and we are going to get enough signatures to make a policy change," says Celeste Racette, "Save Century II" organizer.

Another big group of Wichitans wants something different, new, exciting and hundreds of Facebook comments, saying just this. But activists for “Save Century II” are fighting back.

"Help us get this on the ballot for people to vote on, rather than a few people on the city council," says Francene Sharp, Century II activist.

Organizers already filed to get the building on the national registry for historical landmarks and with this, the building would stay standing.