The Australian government is using helicopters and airplanes to help feed starving animals displaced by the country's wildfire crisis.

The New South Wales government used aircraft to drop more than 4,000 pounds of food, mostly carrots and sweet potatoes, to colonies of brush-tailed rock-wallabies that were left stranded as massive wildfires ravaged their habitat.

The brush-tailed rock-wallaby was already endangered in southeastern Australia before the fires began in September and government officials said their survival could be complicated further by the ongoing crisis. The fires are estimated to have killed more than a billion animals and scorched more than 8.4 million hectacres -- about twice the size of Maryland.

MORE: A look at koalas in Australian culture amid the fires that are devastating their population 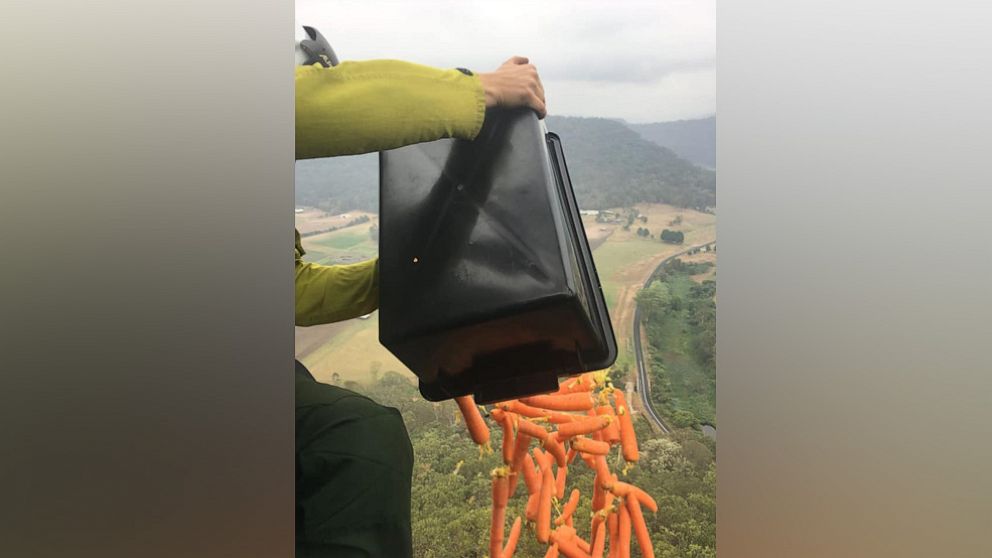 (The Australian government dropped carrots and sweet potatoes, Jan. 11, 2020, to feed animals that have been stranded by relentless brush fires.Matt Kean MP/Facebook)

Over the last week, nearly 2,000 pounds of sweet potatoes and carrots were sent to colonies in the state's Capertee and Wolgan valleys; 2,000 pounds were sent to areas of Yengo National Park; and about 200 pounds of food and water were dropped in the Kangaroo Valley, government officials in New South Wales.

Kean said the drops are one of the most widespread relief efforts of their kind for brush-tailed rock-wallabies. The plan is designed to help maintain the animal colonies and allow them to recover.

"The provision of supplementary food is one of the key strategies we are deploying to promote the survival and recovery of endangered species like the Brush-tailed Rock-wallaby," Kean said. "The wallabies typically survive the fire itself, but are then left stranded with limited natural food as the fire takes out the vegetation around their rocky habitat."

The fires have claimed the lives of at least 25 people and destroyed more than 2,000 homes. University of Sydney ecologist Chris Dickman estimated that more than a billion animals have been killed since the fires began in early September, with about 800 million killed in New South Wales alone. 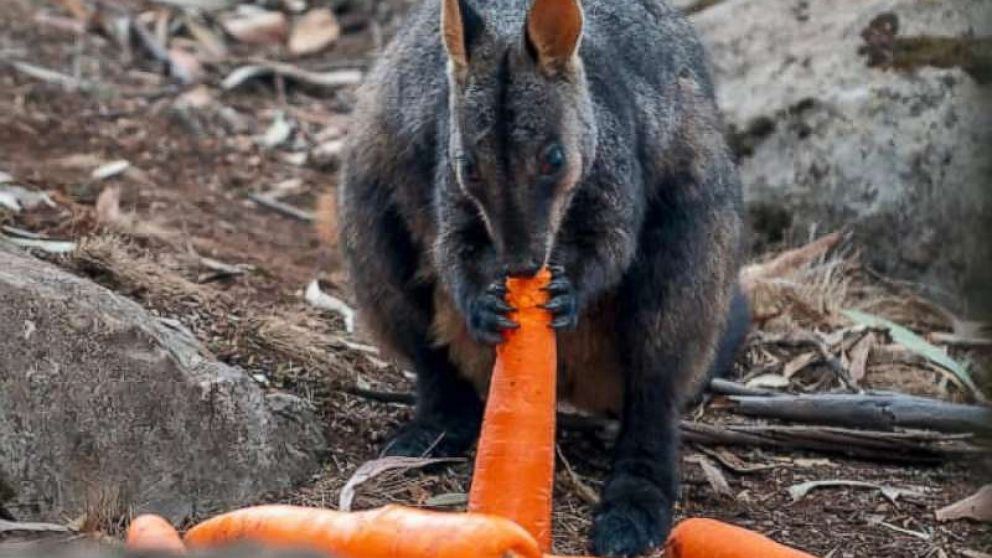 (The Australian government dropped carrots and sweet potatoes, Jan. 11, 2020, to feed animals that have been stranded by relentless brush fires.Matt Kean MP/Facebook)

Fire seasons regularly take place in the country, but this year has been particularly devastating. The country experienced one of its hottest and driest years, in part, because of the Indian Ocean dipole, which is a variation in sea surface temperature on the Indian Ocean that drives the weather patterns.

MORE: How to help support the Australian wildfires relief effort

The IOD was in its strongest positive phase in more than 20 years, resulting in conditions that led to cooler sea surface temperatures near Australia and, in turn, less rain for the country.

With the fire season expected to rage for the next few months, Australians are doubtful that wildlife will fully recover.

"I think there's nothing quite to compare with the devastation that's going on over such a large area so quickly. It's a monstrous event in terms of geography and the number of individual animals affected," Dickman said in an interview with NPR last week.

"We know that Australian biodiversity has been going down over the last several decades, and it's probably fairly well known that Australia's got the world's highest rate of extinction for mammals," he added. "It's events like this that may well hasten the extinction process for a range of other species. So, it's a very sad time."