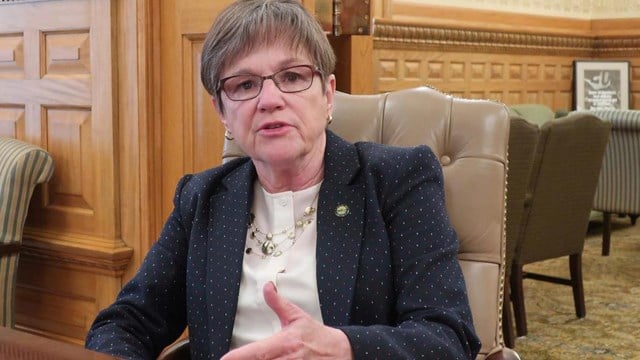 Governor Laura Kelly, D - Kansas, Senator Jim Denning, R - Overland Park, and a dozen lawmakers from both sides of the aisle unveiled the proposal at the statehouse Thursday morning.

It goes beyond just expanding Medicaid.  This compromise bill  breaks an impasse that had allowed a handful of GOP leaders to thwart bipartisan legislative majorities.

It would expand Medicaid coverage to 138% of the poverty level, as well as offer financial aid to Kansans buying insurance on the exchange, and providing some property tax relief by getting Medicaid payments for overnight medical treatment of jail inmates, which is currently paid for by the local jails, funded by property taxes.

Denning and Kelly say they've spent the last few months hammering out the details of this new proposal.

While their relationship has often been contentious as they butted heads over Medicaid expansion, both called this proposal the essence of good government.

#MedicaidExpansion is expected to dominate the coming #ksleg session. Multiple polls over the last few years show support for expansion in Kansas falls somewhere between 60% and 70%. Where do you stand on the idea? Why?#kakenews

Both say this bill has a "pay-for" in it, meaning it mainly pays for itself, limiting the state's financial risk if more participants sign up than expected.

However, not all Republicans are on board with the compromise bill.  Senate President Susan Wagle released a written response saying, "As a cancer survivor, there is no issue more important to me than healthcare, but expanding a broken system that doesn't allow physician choice, limits pharmaceuticals and therapies, places Kansans in waiting lines and delays payments to providers; doesn't address the one problem most Americans face.  That is, the escalating cost of health insurance and the ever increasing out of pocket deductibles that prop up Obamacare.  Socialized government run healthcare is no the answer for Kansans.  Healthcare reform is."

Many of the Kansans who would benefit from Medicaid Expansion say they just need help now.

"I'm working the max hours that I can," said Melissa Dodge, an expansion advocate.

A recent divorcee, she moved back to Kansas with her four children, one of whom has autism and another was born with a heart defect.

"Because of my children and their needs and their endless amounts of appointments and trying to find somebody who can watch two special needs kids before and after school, it just makes the hours that I can work, kind of limited," Dodge said.

That limit also means she doesn't make enough money to qualify for aid on the ACA insurance exchange.  But, she makes too much to qualify for Medicaid.  Predictions say there are between 130,000 and 150,000 Kansans who currently fall in that income gap.

While the state covers the kids, she has no medical insurance and says she needs Medicaid expansion now.

"There is no plan B. That would be... the only word that comes to mind would be devastating," she said.  "I just want a little bit of help to kind of get kind of what I need right now until I can get back on my feet and get better."

Lawmakers will introduce the bill in the Senate with 22 sponsors. That means it already has the support of more than the 21 senators needed to pass it.