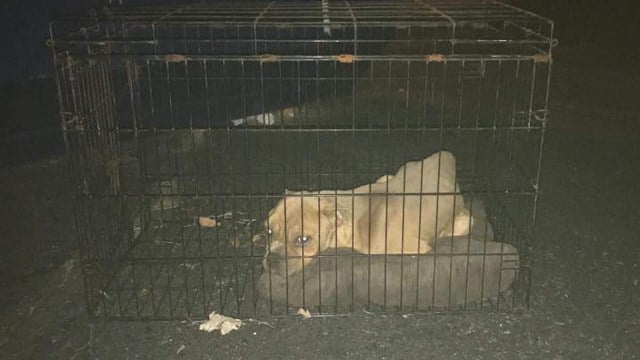 A dog is expected to be okay after someone found him abandoned in a dumpster in southeast Wichita.

"Bowie" is recovering at Wichita's emergency veterinary clinic on S Washington, after a woman taking out the trash at her apartment complex near Pawnee and Oliver heard noises in the dumpster Wednesday.

"And thought maybe it was wildlife that was in there scrounging around," Wichita Animal Action League Director Sarah Coffman said. "Turns out, she found this guy locked in a kennel, thrown away in the dumpster."

The Wichita Animal Action League helps pets who might not otherwise get any help. The woman who found the dog reached out to WAAL, who then took the dog to the emergency vet.

"He's not in good shape," Coffman said. "He's probably 20 to 25 pounds underweight. all of the blood work suggests that this is the result of purposeful starvation."

The dog's helpers gave him a name, Bowie, after the late David Bowie, whose birthday was Wednesday.

"He'll be okay, we think," said Emergency Veterinary Hospital Managing Director, Brock Lofgreen. "We don't have any evidence that he won't."

Lofgreen said Bowie has sores on his arms and backside that came from sitting or lying down without any fat or muscle to cushion his bones.

"Oh gosh, what's the life been like for this poor dog?" Lofgreen said. "If you look at Bowie, he barely has any fat or muscle mass on him."

Lofgreen and Coffman say, if you find an animal that is starving or malnourished, you should not just cut open a 50-pound bag of food and let them go to town. You are instead encouraged to feed them small amounts of food at a time.

"A dog like this, that has not had nutrition in awhile, if you just start feeding them too rapidly, it can be hard on their body," Lofgreen said. "It can actually do the reverse of what you want it to do."

If you find yourself unable to care for a pet, Coffman said you can drop it off anonymously at the Kansas Humane Society or Wichita Animal Control.

"You don't have to resort to this," Coffman said.

Now, Bowie's biggest issue will be getting meat back on his bones, which will take time. Lofgreen said Bowie should start gaining weight within the next two weeks, but he will need to stay at the emergency vet for now.

If you want to help WAAL with the veterinary expenses, or if you are interested in adopting Bowie once he has regained his health, you are encouraged to reach out to WAAL. You can do that through their website, waalrescue.org, or through the Wichita Animal Action League page on Facebook.

An animal rescue group in Wichita is asking for help in finding the owner of a dog that was "left to die" in a dumpster.

The Wichita Animal Action League said Wednesday night on Facebook that the emaciated dog was locked in a wire crate and found in a dumpster at Ashley Lane Apartments in the 2200 block of South Oliver, near Pawnee.

"This poor dog was found emaciated, locked in a kennel and thrown away in a dumpster like TRASH," WAAL said. "We’ve instructed the life-saving finder to take him him to the emergency vet and we need your help to cover his expenses.'

Investigators are following up on information gleaned from the video. He weighs just over 20 pounds, less than half the amount a dog of his size should weigh.

Veterinarians tell KAKE's Jake Bowles that the dog, Bowie, is going to be OK.

Veterinarians say they think #Bowie is going to be okay, after someone found him locked inside a kennel in a dumpster in southeast Wichita. Photographer @MattinICT and I will tell you this sweet little dog's story tonight on #KAKEnews pic.twitter.com/xo9iL6tHSo