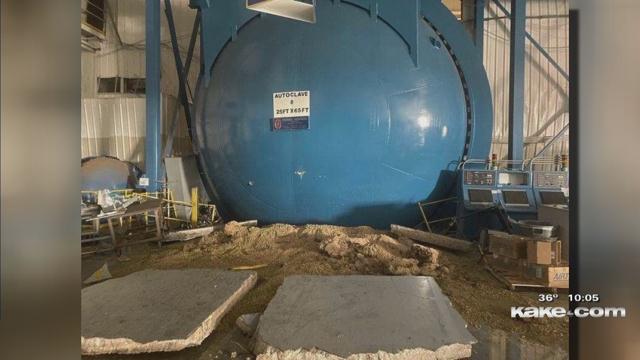 "Once again, it not only does it show the force of this blast but it also shows how fortunate we were that they were on a shutdown," says Chief Doug Williams.

Chief Williams told Sedgwick County commissioners the cause of the blast that left 15 workers injured is still a mystery, but he says this massive piece of equipment called an autoclave blew up, sending a fan 450 feet in the air. It landed in a nearby field.

"The autoclave exploded out at Textron. This is a very, very large piece of equipment. It was pressurized with nitrogen which is an inert gas.  It's not something that's harmful, you're breathing it right now, so, as a result of that explosion, we don't why it exploded," says Commissioner David Dennis.

The autoclave is a large oven, 25 by 65 feet...used to mold airplane equipment. It's so big, it was used to cure a space shuttle wing several years ago. The blast blew the autoclave off its concrete base.

At the time of the blast, Textron thought it was a small pipe that exploded.

The blast was so big it damaged at least a dozen cars in the parking lot and left mangled metal strewn everywhere.
A 20-foot-long piece of iron was launched through the roof of a completely separate building.

"One piece traveled across to another building and just missed a major gas line, which if it would've hit that gas line it would've caused a huge explosion," said Dennis.