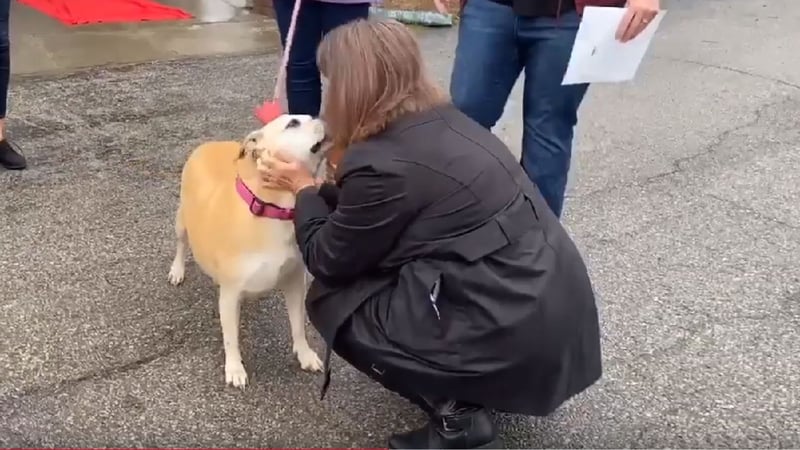 Every dog has it's day -- even if it's years in the making.

Sandi, a 12-year-old dog, has finally found her forever home after she spent 2,461 days, more than six years, at the Marion-Grant County Humane Society in Indiana.

The golden, white and spotted pitbull-boxer mix, was adopted Friday by Erin and Carrie Rhodes, who said they "couldn't stop thinking about" Sandi after their first meeting, MGCHS wrote in a Facebook post.

The Humane Society posted photos and a video of Sandi leaving the building on her new leash wearing a small red crown.

According to the post, Sandi grew accustomed to shelter life after her six-year stay, which had outlasted all of the employees.

The employees at the shelter believed the dog was a stray, but eventually adjusted to living at MGCHS.

"She kind of runs the place," said Christy Bernadin, one of the shelter employees. "She’s been here longer than any employee."

Her goodbye sendoff was "filled with pets, kisses and even a few tears," according to MGCHS.

"I’m so happy," Sue Kershner, a representative for the humane society said. "But it’s bittersweet for the other dogs."

The shelter explained that it can take time and effort to help these animals find a new home, but volunteers who knew Sandi said this "made it all worth it."