More than 400 stories shared in Missing on Kansas 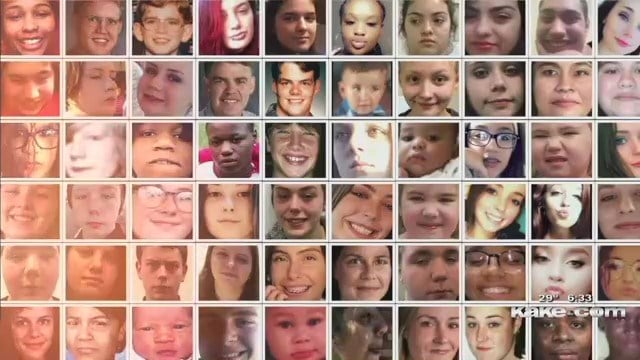 More than 400 stories – that’s how many the community has shared in KAKE News’ investigative series Missing in Kansas. The franchise launched in July 2018, and it shares the story of a missing person or issue every weekday.

John Biagini, a runaway officer with Wichita Police’s Exploited and Missing Child Unit, said he’s seen results. People have told him, “’we saw the picture on TV’ or, you know, ‘I saw this person on the news and stuff.’ And, I know that that's your report that they're seeing it off of, so I think that's a huge help.”

“I think they've gone great. I mean, I think if anything, it helps my job,” he continued. “It helps add a little bit of ease to what I do, because that information is a little more free-flowing.”

SOCIAL MEDIA FINDING PEOPLE
In 2017, EMCU handled about 1,800 missing persons cases overall. Social media can be a big help, where instead of taking hours it may take minutes to find people, Biagini said. The department can help share information with journalists and on its social platforms. Recently, Wichita Police found a runaway fast.

“Somebody called and said, ‘Oh, yeah, hey, He's here. He's sitting in a booth, eat an ice cream cone’ and boom, that was it literally 10 minutes after,” he said.

Though Biagini knows how quickly stories can spread, the community’s response continues to surprise him.

“Well, it does. It does, he said. “But you know, it's a good surprise. I mean, because you're adding more sets of eyes because everybody's looking at their phones. Everybody checks Facebook.”

Having spent 20 years in law enforcement, with a majority of the time being a school resource officer, Biagini said it’s rewarding to get kids and families the help they need.

Runaway cases are a significant part of Missing in Kansas, but cold cases are also an important part of the franchise. Many families of missing adults tell KAKE News that they don’t feel their loved one’s case is as important.

“I kind of just got the feeling from the first detective and the police officers that were assigned to this case, that they didn't really care because of his lifestyle that he had fallen into,” said Mary Kastens, the mother of Zach Anderson.

Zach was last seen on Jan. 18, 2017, in Topeka. He went on a trip with friends from Wichita to northeast Kansas to go gambling. His friends returned, but he never did. Zach faced his struggles, including an addiction to drugs and having a criminal past – something that Mary believe set his case back. A few months after her son vanished, Mary said Topeka Police listed Zach’s case as inactive. It took a while for her to find out.

“So we went all these months without nobody looking for him,” Kastens said. “And not telling us that they were looking for him. I'm not going to lie, we're angry. You know, and I'm still angry. I'm angry at a lot of things, you know, I'm upset because of the choices that he's made. I'm upset with nobody really telling us what to do and how to help.”

Yet, some families are hopeful with the start of the Kansas Bureau of Investigation’s new Missing Persons Clearinghouse. It’s an online database featuring active cases in real time. Zach’s is one of about 530 listed online today.

Throughout the Missing in Kansas series, investigator Annette Lawless has helped collect details on hundreds of missing people. Some solved cases have been listed online months or years after they were closed. Some people have misspelled names or photos that don’t match their profile. KAKE News continues to work with law enforcement and non-profits to get those flyers corrected.

Many law enforcement agencies agree that when it comes to missing people, it truly is a community effort. Together, we can keep tabs on those unaccounted for, and hopefully bring those people home safe.

KAKE News is working on enhancing our Missing in Kansas series, with partnerships and additional features on our website. If you have a missing persons story you’d like for us to share, contact Annette Lawless at alawless@kake.com.