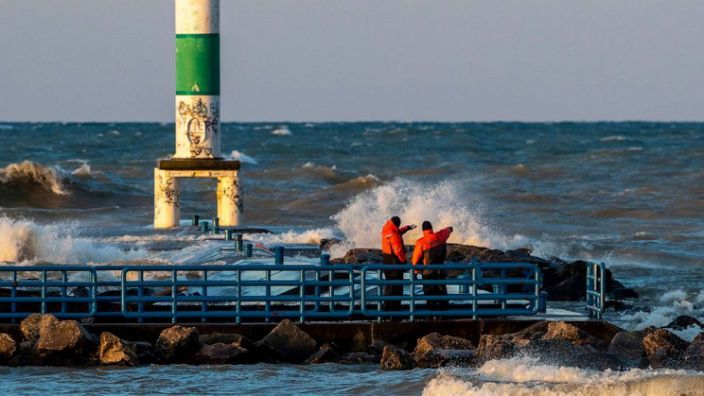 Two friends were making their first visit to Lake Michigan when they were swept into the water. One of the teens, a 16-year-old girl, hasn't been seen for over 24 hours.

The friends were on the Holland State Park pier, near Grand Rapids, at about 11:30 p.m. on Wednesday when a large wave knocked them into the water, according to the Ottawa County Sheriff’s Office.

One friend was able to climb out of the water and seek help, sheriff's officials said, but 16-year-old Eliza Trainer was swept away and is presumed to have drowned.

"This is a recovery at this point," Ottawa County Sheriff’s Sgt. Jay Douglas told reporters on Thursday.

The survivor was taken to a hospital and has since been released, Douglas said.

The friends -- from another part of the state -- were there to see Lake Michigan for the first time, Douglas said.

PHOTO: Rescue crews search for a 16-year-old girl, Jan. 2, 2020, in Holland, Mich., who fell into Lake Michigan after a wave hit the pier at Holland State Park the night before. (Cory Morse/The Grand Rapids Press via AP)

Crews are searching for Trainer Friday by using sonar on boats and by monitoring the shoreline, Ottawa County Sheriff’s Capt. Jake Sparks told ABC News. Drones were used in the search on Thursday, he said.

The high waves are "making it really difficult to get divers in the water," Sparks said.

"These conditions are not conducive to being out on the pier," Douglas said. "The waves are breaking over the pier. Add that to being out there at night, it's a very dangerous situation."

"This is a great example of the dangers of winter weather -- cold water is dangerous," Bryan Swintek, a Coast Guard search and rescue mission coordinator, told ABC News.

He said Lake Michigan was about 39 degrees that night.

"Somebody's ability to survive in that water is about one hour without a life jacket on," Swintek said.

Swintek urges those heading to Lake Michigan to be prepared with the right equipment and clothing, and to have a communication plan.