'Not safe to move’: Fire threats intensify in Australia 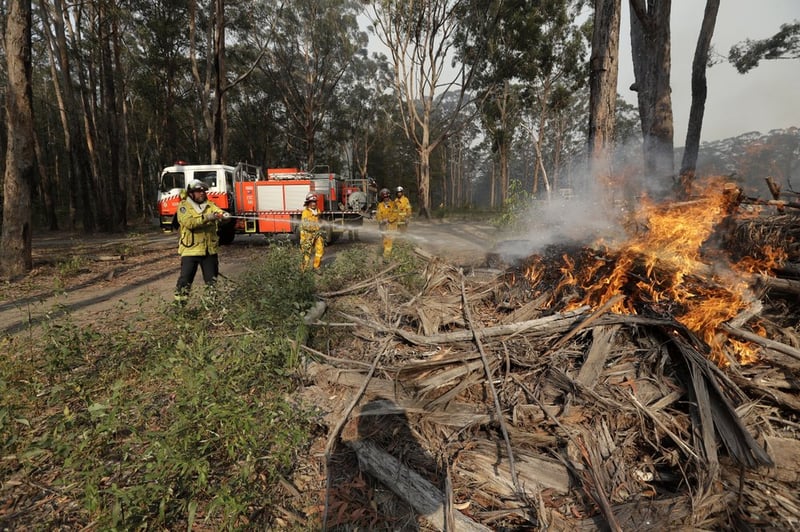 A father and son who were battling flames for two days are the latest victims of the worst wildfire season in Australian history, and the path of destruction widened in at least three states Saturday due to strong winds and high temperatures.

The death toll in the wildfire crisis is now up to 23 people, Prime Minister Scott Morrison said after calling up about 3,000 reservists to battle the escalating fires, which are expected to be particularly fierce throughout the weekend.

“We are facing another extremely difficult next 24 hours,” Morrison said at a televised news conference. “In recent times, particularly over the course of the balance of this week, we have seen this disaster escalate to an entirely new level.”

Dick Lang, a 78-year-old acclaimed bush pilot and outback safari operator, and his 43-year-old son, Clayton, were identified by Australian authorities after their bodies were found Saturday on a highway on Kangaroo Island. Their family said their losses left them “heartbroken and reeling from this double tragedy.”

Lang, known as “Desert Dick,” led tours for travelers throughout Australia and other countries. “He loved the bush, he loved adventure and he loved Kangaroo Island,” his family said.

Clayton Lang, one of Dick’s four sons, was a renowned plastic surgeon who specialized in hand surgery.

The fire danger increased as temperatures rose Saturday to record levels across Australia, surpassing 43 degrees Celsius (109 Fahrenheit) in Canberra, the capital, and reaching a record-high 48.9 C (120 F) in Penrith, in Sydney’s western suburbs.

Video and images shared on social media showed blood red skies taking over Mallacoota, a coastal town in Victoria where as many as 4,000 residents and tourists were forced to shelter on beaches as the navy tried to evacuate as many people as possible.

By Saturday evening, 3,600 firefighters were battling blazes across New South Wales state. Power was lost in some areas as fires downed transmissions lines, and residents were warned that the worst may be yet to come.

“We are now in a position where we are saying to people it’s not safe to move, it’s not safe to leave these areas,” state Premier Gladys Berejiklian told reporters. “We are in for a long night and I make no bones about that. We are still yet to hit the worst of it.”

Morrison said the governor general had signed off on the calling up of reserves “to search and bring every possible capability to bear by deploying army brigades to fire-affected communities.”

Defense Minister Linda Reynolds said it was the first time that reservists had been called up “in this way in living memory and, in fact, I believe for the first time in our nation’s history.”

The deadly wildfires, which have been raging since September, have already burned about 5 million hectares (12.35 million acres) of land and destroyed more than 1,500 homes.

The early and devastating start to Australia’s summer wildfires has also been catastrophic for the country’s wildlife, likely killing nearly 500 million birds, reptiles and mammals in New South Wales alone, Sydney University ecologist Chris Dickman told the Sydney Morning Herald. Frogs, bats and insects are excluded from his estimate, making the toll on animals much greater.

A man runs back to his truck after trying to quench a fire near Moruya, Australia, Saturday, Jan. 4, 2020. (AP Photo/Rick Rycroft)

Experts say climate change has exacerbated the unprecedented wildfires around the world. Morrison has been criticized for his repeated refusal to say climate change is impacting the fires, instead deeming them a natural disaster.

Some residents yelled at the prime minister earlier in the week during a visit to New South Wales, where people were upset with the lack of fire equipment their towns had. After fielding criticism for taking a family vacation in Hawaii as the wildfire crisis unfolded in December, Morrison announced he was postponing visits to India and Japan that were scheduled for later this month.

The government has committed 20 million Australian dollars ($14 million) to lease four fire-fighting aircraft for the duration of the crisis, and the helicopter-equipped HMAS Adelaide was deployed to assist evacuations from fire-ravaged areas.

The deadly fire on Kangaroo Island broke containment lines Friday and was described as “virtually unstoppable” as it destroyed buildings and burned through more than 14,000 hectares (35,000 acres) of Flinders Chase National Park. While the warning level for the fire was reduced Saturday, the Country Fire Service said it was still a risk to lives and property.

Rural Fire Service Commissioner Shane Fizsimmons said the 264,000-hectare (652,000-acre) Green Wattle Creek fire in a national park west of Sydney could spread into Sydney’s western suburbs. He said crews have been doing “extraordinary work” by setting controlled fires and using aircraft and machinery to try to keep the flames away.

More than 130 fires were burning in New South Wales, with at least half of them out of control.

Firefighters were battling a total of 53 fires across Victoria state, and conditions were expected to worsen with a southerly wind change. About 900,000 hectares (2.2 million acres) of bushland has already been burned through.

In a rare piece of good news, the number of people listed as missing or unaccounted for in Victoria was reduced from 28 to six.

“We still have those dynamic and dangerous conditions — the low humidity, the strong winds and, what underpins that, the state is tinder dry,” Victoria Emergency Services Commissioner Andrew Crisp said.

“If you might be thinking about whether you get out on a particular road close to you, well there’s every chance that a fire could hit that particular road and you can’t get out,” Victoria Emergency Services Commissioner Andrew Crisp said.