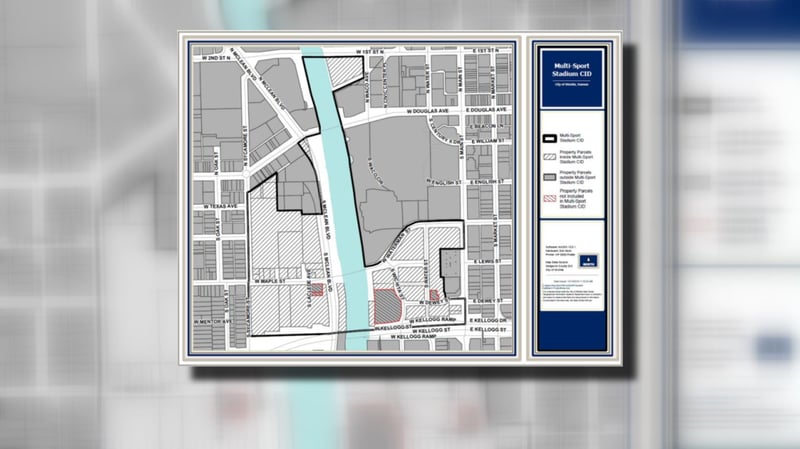 Wichita has a new plan to help pay for the new baseball stadium, but what will this mean for taxpayers?

An item on the City Council agenda is a proposal to establish a Community Improvement District, or CID, for an area around the new baseball stadium which would raise sales tax by 2%. There's already some mixed feelings about the proposed change.

The new baseball stadium is getting closer to being finished with plans to open in April. Part of the area around it hasn't been developed yet, but the plan to implement a 2% sales tax increase would help pay for new growth nearby.

The highlighted area of the map spanning from N. Sycamore to Main Street, and from Kellogg, all the way up to a corner of First Street would see the tax jump.

If approved, the funds from the CID will go to the ballpark's developers for a period of up to 22 years, according to the document.

"You know, it doesn't seem like a lot when you say 2%, but when you think about how much it costs on top of something, it is a lot," said Kelly Sooter, a frequent shopper in Wichita.

Sooter is from El Dorado and does most of her shopping in Wichita. She thinks the tax increase will do nothing but deter people from spending in the area, but avid baseball fans like Ashley Prohel and her son Austin disagree.

"I don't think it would keep us from buying stuff, it would probably make us support it even more. We're excited to get baseball back in Wichita," said Prohel.

Businesses in the area say that with the increased foot traffic of the new stadium, they're not too worried about the proposed tax increase.

The City Council will discuss the idea during the meeting on January 7th.