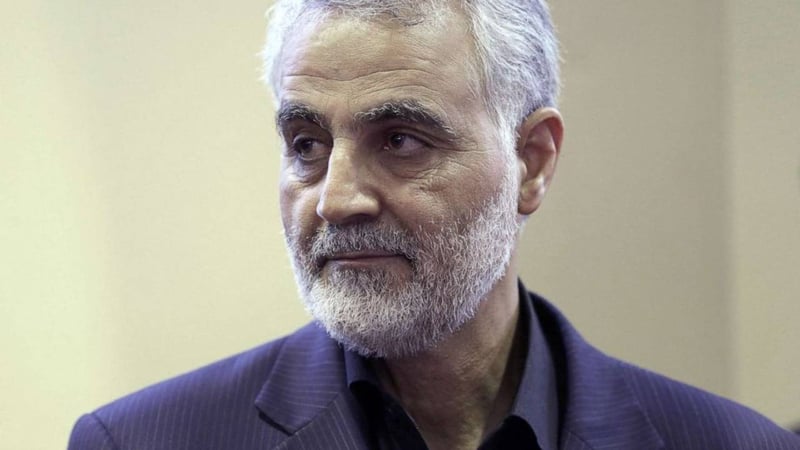 Senate Majority Leader Mitch McConnell echoed many of his Republican colleagues on the Senate floor on Friday, touting the killing of Qasim Soleimani as a major victory for President Donald Trump that will make Americans safer.

"This morning Iran's master terrorist is dead. The architect and chief engineer of the worlds most active state sponsor of terrorism has been removed from the battlefield at the hand of the United States military," McConnell said. "Soleimani made it his life's work to take the call 'Death to America' and 'Death to Israel' and turn them into action."

Qassem Soleimani, the leader of Iran's elite Quds Force, was killed late Thursday in a U.S. airstrike that targeted a convoy near the main airport in Baghdad. The airstrike was carried out at President Trump's direction.

McConnell confirmed the Trump administration would brief Capitol Hill staffers Friday, and McConnell said he was working to arrange a classified briefing for all lawmakers next week. He also confirmed he has been personally briefed by Defense Secretary Mark Esper.

Those briefings are not enough for Democrats, who have criticized the administration for not providing advance notice of the operation to the "Gang of Eight," a group comprised of bicameral leadership and chairs of the intelligence committees.

Schumer suggested the Trump administration may not have fully considered the consequences of the operation, including how to handle possible retaliation.

"This action may well have brought our nation closer to another endless war, exactly the kind of endless war the president promised he would not drag us into," Schumer said.

Schumer warned that an increase in U.S. forces in the Middle East should be undertaken only with congressional authorization, but the Pentagon has already announced a deployment of roughly 3,500 more troops to the Middle East in response to rising tensions in the region.

"The risk of doing nothing was enormous," Pompeo said in an appearance on Fox News.

Though McConnell and Schumer both discussed impeachment during their speeches Friday, neither connected the timing of the Soleimani operation to the impending Senate impeachment trial.

McConnell acknowledged that in the charged partisan environment, many Democrats might be quick to judge the Soleimani operation, but warned against quick conclusions.

"Now predictably enough in this political environment, the operation that led to Soleimani's death may prove controversial or divisive. Although I anticipate and welcome a debate about America's interests in the middle east, I recommend that all senators wait and review the facts from the administration before passing much judgment not his operation and its consequences," McConnell said.

McConnell addressed criticism of his vow to be in "total coordination" with the White House on the impeachment proceedings.

"We've heard claims it's a problem that I've discussed trial mechanics with the White House," McConnell said, "Even as my counterpart the Democratic leader has openly coordinated political strategy with the speaker, who some might call the prosecution. So it's okay to have consultation with the prosecution but not, apparently, with the defendant."

McConnell reiterated his plan to adhere closely to the structure of the 1999 Clinton impeachment trial, hopefully passing an overwhelmingly bipartisan resolution at the start of the trial that would set up initial logistics such as briefs, opening statements, and senator questions, turning to the question of live witnesses only after the initial phases are completed.

"So look, you better believe senators have started forming opinions about these critical questions over the past weeks and months. We sure have," McConnell stated, insisting senators are entitled to their opinions on the House impeachment proceedings, but that they will "soberly" consider the impeachment articles once they are handed over to the Senate.