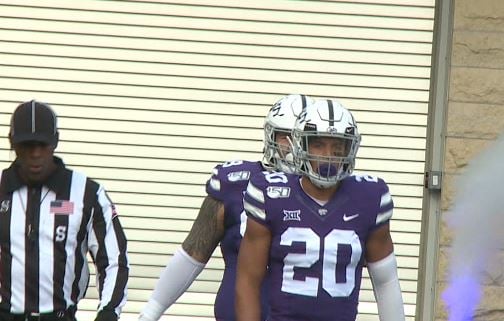 K-State's last bowl game was in 2017 and in that game Denzel Goolsby helped lead the Wildcats to a win.

The Bishop Carroll grad will try to do the same thing tomorrow in his final time putting on a Wildcat uniform.

“I just remember our team needed a play to be made and I tried to step up," Goolsby said.

Goolsby is as steady of a safety as they come. Not only is he the team’s last line of defense but he’s also the teams leading tackler.

181 times Goolsby has brought down an opponent but what makes him such a great dude is his ability to lift up his teammates.

“I will remember Denzel more for the things and what he’s established within our culture off the field," K-State Head Coach Chris Klieman said.

“When his perspective comes in he sees it through an adults eyes," said Hazelton. "I’m married and I’ve been through some things in my life. I’m in a different place than a lot of you guys who just want to go chase women around the streets of Memphis.”

"Trying to be that upper classman on the team, that senior that can kind of be that liaison between the two and really be able to kind of break out to those other guys that maybe aren't as willing to hear those other coaches and stuff like that," Goolsby continued.

Goolsby has been a starter for three years and he says when he looks back at his time at K-State he’s most proud of the relationships he’s made and the positive impact he’s tried to have on the community.

"That's the type of stuff that I'm going to cherish you know 30-40 years from now," Goolsby stated. "Not just the games we won or lost and things like that."