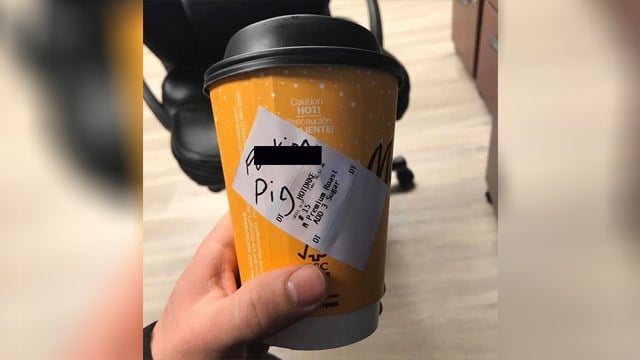 The Herington Police Department says a social media post claiming that a McDonald's employee wrote an insult on an officer's coffee cup was "completely fabricated."

Herington Police Chief Brian Hornaday released the statement at a news conference held in a McDonald's in Junction city on Monday night. A social media post from the alleged victim claimed that an employee wrote "F-ing Pig" on his cup when he went through the drive-thru.

After reviewing surveillance footage, investigators determined that no employees had written on the cup.

When asked why he did it, the officer allegedly said the post was "meant to be a joke."

The officer is around 23-years-old and had only been employed with the department for two months. He has since resigned.

Hornaday says the incident is "absolutely a black eye on law enforcement," and that the Herington Police Department is determined to regain the trust that has been lost with the public.

McDonald’s is disputing allegations that one of the restaurant’s workers wrote an expletive and the word “pig” on a coffee cup that was given to a Kansas police officer who stopped there on his way to work.

Dana Cook, the owner of a McDonald’s in Junction City, said in a written statement that the restaurant has security video that proves none of its employees wrote the words. Cook did not speculate about who may have written them before Herington’s police chief posted a picture of the cup on Facebook.

Chief Brian Hornaday’s Facebook post about the cup has since been removed and he now says he’s “looking further into this matter” with McDonald’s.

In the Facebook post, he said one of his officers was handed the cup Saturday when he went through the McDonald’s drive-through in Junction City, which is near Fort Riley.

“This behavior has been, is and always will be wrong,” Hornaday said in his initial post.

He didn’t immediately return an email message Monday from The Associated Press.

But he told WIBW-TV that his reaction after the initial report was based on believing that a police officer has integrity “and it would be foolish of any law enforcement agency or professional to not take the word of their police officer until they can be proven otherwise.”

The officer involved in the incident has been with the department for only two months, but spent five years as a military police officer in the Army, Hornaday said.

The chief said McDonald’s and his department are working together to investigate. He asked for patience as the investigation continues.

“Judgment is something that should be made at the end after all evidence and all facts have been gathered and presented,” he said.

“My McDonald’s have the utmost respect for all members of law enforcement and the military and were troubled by the accusation made,” Cook wrote in the statement. “We thoroughly reviewed our security video from every angle, which clearly shows the words were not written by one of our employees. We look forward to working with Chief Hornaday as he continues his investigation.”

A McDonald’s fast food restaurant in Kansas is receiving national attention after a police officer said he was handed a coffee with an expletive and the word “pig” written on it.

Herington Police Chief Brian Hornaday said in a Facebook post that one of his officers was headed to work Saturday when he stopped at the McDonald's drive through in Junction City, which is near Fort Riley base.

Dana Cook owns that McDonald's and told KTKA that they have video showing it wasn’t their employee.

Hornaday wrote the officer was offered a "free lunch" and that “A Big Mac and large fries doesn't make up for it.” He said the officer has never met the McDonald's employee.

“My McDonald’s have the utmost respect for all members of law enforcement and the military and were troubled by the accusation made. We thoroughly reviewed our security video from every angle, which clearly shows the words were not written by one of our employees. We look forward to working with Chief Hornaday as he continues his investigation.”

Hornaday spent Saturday at the McDonald’s looking at the security tape, but couldn’t find any evidence. Cook said told him on Sunday they found new video that proves it wasn’t their employee.

Hornaday had not seen the video as of Sunday.

The Geary County Sheriff’s Office’s involvement in the incident is merely to state this is not indicative of the community of Junction City, Geary County, Kansas. The Geary County Sheriff’s Office is standing by its original statement in reference to the incident at McDonald’s. It is saddening to see this incident in our community no matter who wrote on the officer’s cup. The incident has garnered national news and has given those outside our community a foothold into the relationship between the law enforcement agencies here in Geary County, Kansas and the community we consider ourselves members of. After the Headlines have faded from the national media outlets, we realize it is us as a community that have to constantly work together in order to properly serve the community. We all live here, work here, have families here, and raise our children here. It is the mission of the Men and Women of the Geary County Sheriff’s Office to safeguard the lives, Constitutional Rights and property of those in our community by fairly and impartially enforcing state and local laws. We will perform our public safety and custodial duties with honor, courage, compassion and fidelity while holding ourselves accountable to the community we serve. We will uphold the Constitution of the State of Kansas, and the Constitution of the United States of America. WE will stand together as a community while the incident investigation is completed.