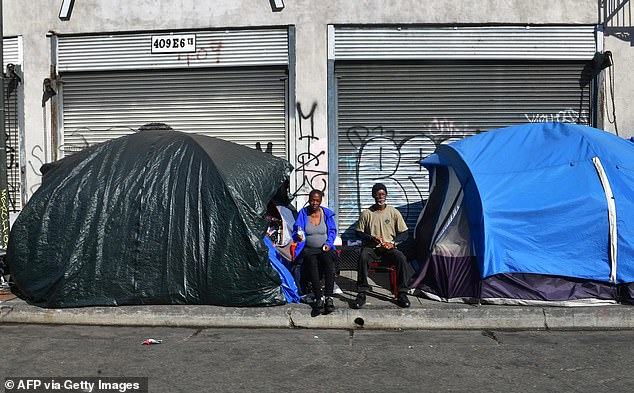 The President took to Twitter, threatening to get the federal government involved in the crisis because Newsom is doing 'a really bad job'.

The tweet comes after the Department of Housing and Urban Development [HUD] released data last week revealing that the homeless rate in California has surged a staggering 16.4% in the past year.

Currently, more than 140,000 California residents are without shelter on any given night - accounting for more than a fifth of the entire homeless population across the United States.

Newsom appears to blame the Trump administration for the escalating crisis.

He was seen on camera last week, stating: ' They're [the Trump Administration]  not serious about this issue. They're playing politics with it, expect nothing but division coming and emanating from the folks at HUD and the President.' 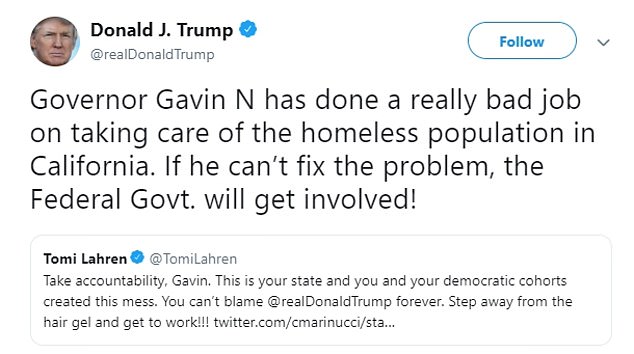 Conservative commentator Tomi Lahren posted the clip to her Twitter account last week and added the comment: 'Take accountability, Gavin. This is your state and you and your Democratic cohorts created this mess. You can't blame @realDonaldTrump forever. Step away from the hair gel and get to work!!!'

Trump then retweeted Lahren before adding his own threat to get the feds involved in the state.

'Governor Gavin N has done a really bad job on taking care of the homeless population in California. If he can’t fix the problem, the Federal Govt. will get involved!'

The data released recently does not help the governor: the homeless rate in California has surged a staggering 16.4% in the past twelve months.

More than 140,000 California residents are without shelter on any given night - more than a fifth of the entire homeless population across the United States

Blue states, such as New York, Hawaii, California and Washington had the highest rates of homelessness per 10,000 people.

States that are considered more conservative have the least amount of homelessness per 10,000 people are Mississippi, Louisiana, Alabama, Virginia and North Dakota.

The HUD report found that California was not the state with the largest percentage increase in their homeless population, however. That dubious distinction belongs to New Mexico, whose homeless population increased by 27% in 2019.

Meanwhile, furious residents in California have begun taking matters into their own hands - fed up that the state government appears to be adequately addressing the crisis.

In Oakland, business owners recently put large logs over their streets to deter homeless people from setting up camps.

In San Francisco, residents placed boulders on the sidewalk to stop encampments outside their doors.

Several neighbors combined a few hundred dollars to buy the boulders and placed them in a row near street curbs.

A spokeswoman from the San Francisco Public Works department said the city was not involved in the boulder placement and originally said they would not remove the boulders because they weren't blocking the main walkway.

This response angered homeless advocates who said the boulder placement was 'anti-homeless architecture'.

Authorities eventually removed the boulders after saying they posed a road safety hazard.

Meanwhile, the city's Tenderloin district  is a particular grievance for residents who want to clean up the area.

The Tenderloin district hosts a series of addicts and homeless who reportedly leave behind human waste, as well as used needles.

The city set up public toilets in an attempt to combat this and last year the formation of the 'poop patrol', a special six-person team tasked with cleaning up the feces around San Francisco, was announced.

The San Francisco City Performance Scorecard reports that there are 9,784 individuals that meet the federal definition of homeless in 2019 - rising 30 percent more than the 2017 count.

Director for the Department of Homelessness and Supportive Housing Jeff Kositsky estimates that 20,000 homeless people either reside or pass through San Francisco any given year.

Five percent of the city's total budget is used to combat homelessness.

The city has faced government and federal criticism in addition to resident outcry.

Trump blamed 'liberal policies' for the crisis and said city officials were allowing waste to filter through storm drains leading to the ocean.

'It's a terrible situation that's in Los Angeles and in San Francisco,' Trump said of the issue.

He has since made homelessness in major U.S. cities a campaign issue going into the 2020 election.

The EPA accused California of failing to protect residents from 'degraded water.'

The letter said: 'California needs to fulfill its obligation to protect its water bodies and, more importantly, public health, and it should take this letter as notice that EPA is going to insist that it meets its environmental obligations.'

'If California does not step up to its delegated responsibilities, then EPA will be forced to take action.'

The letter directly linked the alleged water pollution to the homelessness crisis.

Although the Trump administration has told San Francisco and California to clean up its act, they're unwilling to pay for it.

The request asked for additional resources to fight homelessness, including 50,000 housing vouchers for the poor.

Carson said: 'Your letter seeks more federal dollars for California from hardworking American taxpayers but fails to admit that your state and local policies have played a major role in creating the current crisis.'