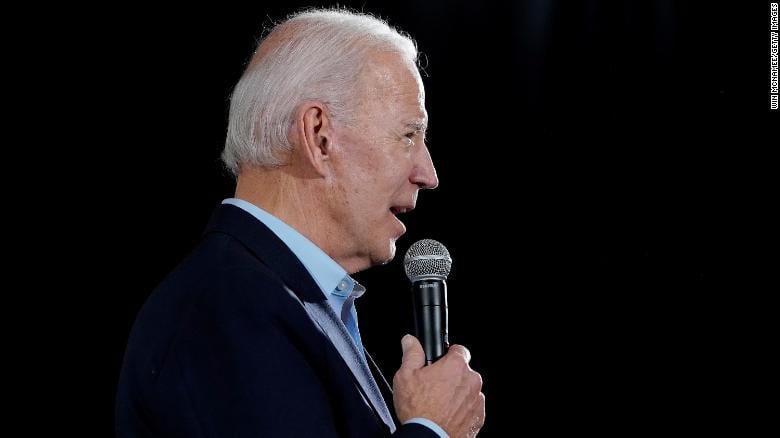 "First of all, I'm going to obey any subpoena that was sent to me," Biden said at a campaign event in Fairfield, Iowa.

The former vice president's comments come one day after he reiterated to the Des Moines Register's editorial board that he wouldn't comply with a subpoena followed by a series of attempts to clarify what he meant.

Biden originally told the newspaper he wouldn't comply "because it's all designed to deal with (President Donald) Trump doing what he's done his whole life -- trying to take the focus off him." Biden told the newspaper his testimony would enable the President to "get away" from the trial's focus.

"If I went, let's say I voluntarily, just said let me go make my case, what are you going to cover?" he asked, referring to the press. "You guys, instead of focusing on him, you're going to cover for three weeks anything I said. And he's going to get away."

Biden first sought to clarify the comments earlier Saturday in a string of tweets, saying that "in my 40 years in public life, I have always complied with a lawful order."

He added: "But I am just not going to pretend that there is any legal basis for Republican subpoenas for my testimony in the impeachment trial. That is the point I was making yesterday and I reiterate: this impeachment is about Trump's conduct, not mine."

"The subpoenas should go to witnesses with testimony to offer to Trump's shaking down the Ukraine government — they should go to the White House," Biden tweeted.

He then expanded on those tweets in comments to reporters in Tipton, Iowa, telling them he would "honor whatever the Congress in fact legitimately asked me to do" but stopped short of saying he would outright comply with a subpoena. When asked at that time if he would challenge a subpoena in court if he felt he didn't have relevant facts to bring to the investigation, Biden replied, "I don't think that's going to happen to begin with. Let's cross that bridge when it comes."

He added: "I would in fact abide by the, whatever was legally required of me."

Republicans have threatened to call Democrats -- including Joe Biden and his son, Hunter Biden -- to testify in a Senate trial after the House impeached Trump earlier this month, accusing the President of abusing his power and obstructing Congress in relation to a Ukraine pressure campaign.

Biden maintained Saturday that the conversation over his compliance was a distraction from Trump's conduct, which he said needs to be the focus of the Senate trial.

"Every single solitary person who's investigated what's happened in Ukraine, including all the people under oath in his administration, said Biden's as clean as a whistle," he said at the Fairfield event. "Biden did his job."