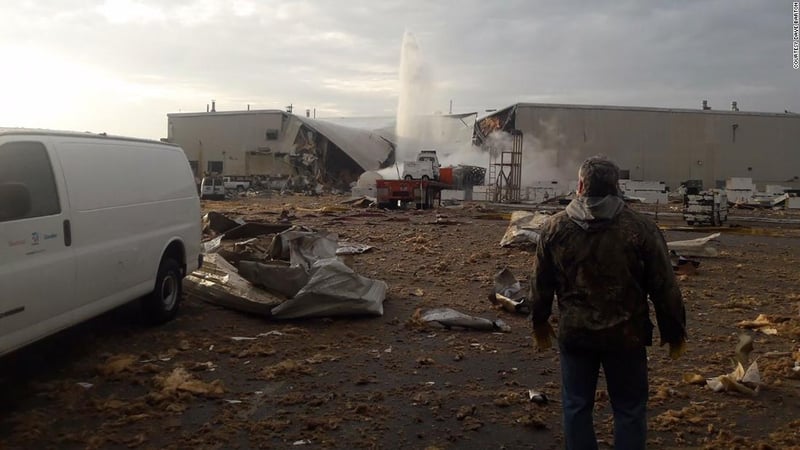 Workers injured in Friday's explosion at Wichita's Beechcraft plant have been released from an area hospital.

A spokesperson for Ascension Via Christi said Monday all injured patients have been discharged.

One person was undergoing treatment at Wesley Medical Center. He is in fair condition. A Wesley spokesperson said the man should be released today or Tuesday.

More than a dozen people were injured in the blast.

Textron Aviation continues to assess the impact of the explosion that occurred at its Plant 3 building on Friday, Dec. 27. The priorities at this time include continued care and support of our employees who were injured and assistance to those who were otherwise impacted, determining the structural integrity of the building, ensuring the safety and security of our employees and response team personnel, and coordination and cooperation with all investigations as to cause.

The company’s emergency response team meets multiple times daily to address these priorities and has appointed vendors to assist with the cleanup efforts. While the building damage assessment continues, the location of the company’s Cessna SkyCourier development program in Plant 3 appears to have not been impacted.

Textron Aviation is grateful for the rapid response and expertise of the emergency personnel and first responders who assisted at the scene.

UPDATE: The patient at St. Francis has been upgraded to good condition, and the patient currently at Wesley is now in fair condition.

Two people are still in serious condition as a result of the explosion at Beechcraft on Friday. We are happy to report that the other 13 patients have been treated and released from both Via Christi Saint Francis and Wesley Medical Center.

More than a dozen people are recovering after the blast at Textron Aviation's Beechcraft manufacturing facility. People all over East Wichita reported hearing and feeling the blast around 8 a.m. At least 14 people were rushed to local hospitals.