A cup of McDonald's coffee makes a stir on social media 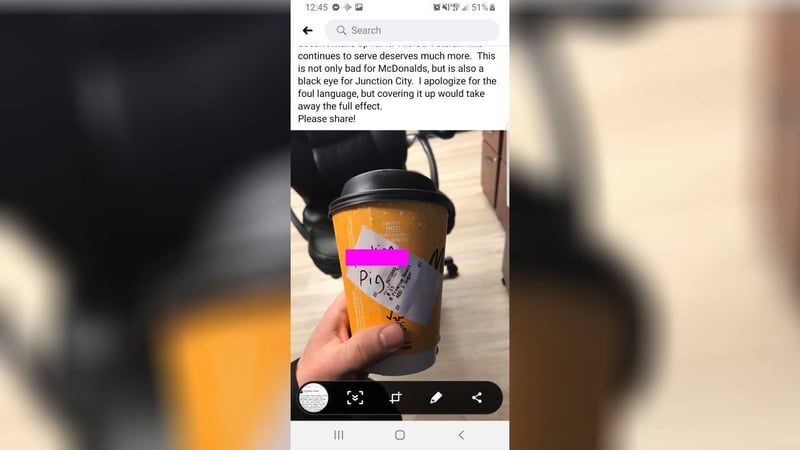 The Police Chief in Herington, Kansas posted a picture of a cup that is going viral on social media.

The Facebook post says one of the chief's officers bought a coffee from a McDonald's location in Junction City, and the cup had an expletive written on the side, followed by "Pig."

"Although I understand this is likely the act of one person and not a representation of the company, when it was brought to their attention the company offered him a 'free lunch,'" Chief Brian Hornaday posted. "No thank you. A Big Mac and large fries doesn't make up for it. The US Veteran who continues to serve deserves much more."

A manager at the McDonald's location where the incident is purported to have happened said the company is looking into it.

"McDonald's is doing an internal investigation on it, and we are not able to make any comments at this time," the manager told KAKE News.

Statement of Herington Chief of Police Brian L. Hornaday:
“On Saturday, December 28, 2019 at approximately 6:12 am, a Herington Police Officer stopped in his personal vehicle at the McDonald’s drive-thru located at 1127 South Washington Street in Junction City, Kansas while on his way to serve the citizens of Herington.  After ordering and paying for a cup of coffee, he continued his travel to the Herington Police Department where he realized what a McDonald’s employee had written on the receipt attached to his cup.  A derogatory statement made solely due to the profession he chose many years ago was written on the cup.  The Officer has spent more than 5 years serving his Country honorably as a Military Police Officer in the United States Army and is now continuing his service as an Officer with the Herington Police Department.  The Officer and I have been in contact with McDonald’s and will continue to work with them to ensure this matter is resolved in a positive manner.”

At this time, I will not be releasing the name of the Police Officer.  Any questions for the Officer should be directed to me.  Thank you.

A spokesperson from McDonald's Corporate said that it's "Definitely not what we stand for as a company." However, he also emphasized that it was a locally-owned franchise where the incident is alleged to have happened. He went on to say that "Junction City is a very pro-police town" and added that, "I'm not even sure that it happened on our premises."