Witnesses describe the moment of explosion at Beechcraft plant 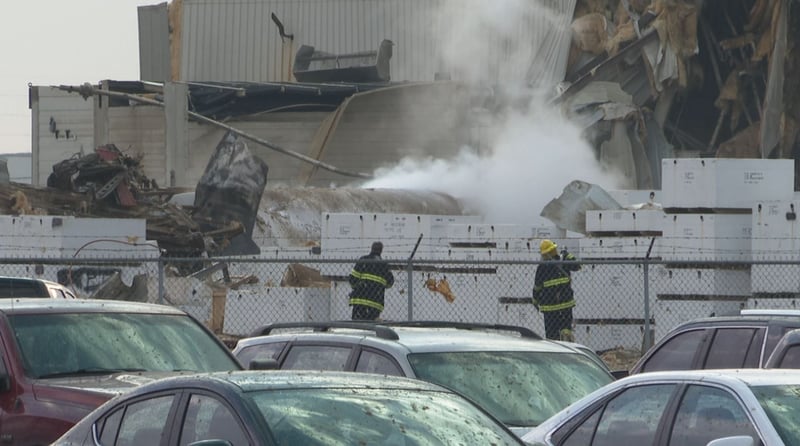 To give you an idea of how powerful the explosion was, we found a piece of debris that was hundreds of feet away from the building in a neighborhood. People who work nearby said the blast was so loud, they thought a car crashed through their building.

“Well I was just sitting, cleaning up my cat litter and the food, and I just happened to notice this huge boom… And also my whole house shook,” said Preston Timmons, who witnessed the explosion.

What started out as an ordinary Friday morning for Timmons was quickly filled with confusion.

“It was big. It like shook the whole window. Then I decided to leave and went down the street and noticed Webb road and Kellogg was blocked off, and I was like what’s going on,” said Timmons.

Margaret Berube was at work when it happened and had a front row seat.

“It was a really loud boom. It was definitely a crazy morning,” said Berube.

Berube works at Millers Dry Cleaning just across the street. Having her 1-year old son with her, at first she feared the worst.

“I even went outside to check to see if there was a car that was half way imbedded in the building,” said Berube.

After seeing the plume of black smoke, she realized what was going on.

Her husband is also a contractor for Beechcraft and was in the building that exploded just days ago servicing one of the machines.

“It could have been so much worse. I’m just really thankful that he’s safe across town right now,” said Berube.

Even though Berube and Timmons we’re in totally different areas with different perspectives when the explosion happened, their hope is the same.

“I just really hope that emergency responders are ok and everything is ok,” said Timmons.

“I hope there are no fatalities and everybody recovers fully from this,” said Berube.

Plant 3 will remain closed until further notice. Operations at the remaining facilities on the East cmapus will resume on Saturday, December 28th.