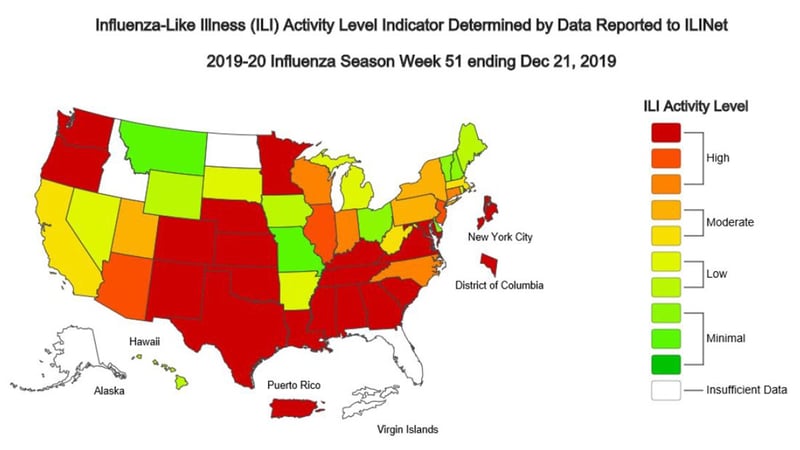 Deaths from the flu jumped this week, with the Centers for Disease Control and Prevention reporting that 2,100 people had died and 39,000 people had been hospitalized, according to preliminary estimates the agency released Friday.

Of those deaths, 22 were among children, a group that's particularly vulnerable to the flu and its complications.

During recent past flu seasons, deaths among children have ranged from 37 to 187 fatalities.

All areas of the country saw an increase in flu activity for the week ending Dec. 21, with the highest flu activity clustered in 25 states, including Kansas. In total, the CDC estimates that 4.6 million people have gotten the flu so far this season.

According to the latest #FluView, all regions of the country are seeing elevated flu activity. Keep up with the latest flu activity and find out if flu is spreading in your area with CDC’s weekly #FluView report: https://t.co/pwPDPs8ZeI pic.twitter.com/ICNqVnHudQ

As of right now, 2019-2020 flu activity is primarily being driven by influenza B/Victoria viruses, which is unusual for this time of year.

In general, influenza B is more common in children, while influenza A, also known as H1N1, is more commonly seen in older adults, according to Dr. Jessica Grayson, an assistant professor at the University of Alabama at Birmingham.

It remains too early to say how severe this flu season will be or how long it will last.

Typical symptoms of the flu include fever, sore throat, aches, chills and sweats and fatigue, according to the Mayo Clinic.

While the flu might seem like a relatively minor disease, because it's so common, complications from the flu, which can include pneumonia, bronchitis, asthma flare-ups and heart problems, can be deadly.

People with weakened immune systems, adults older than age 65 and babies are all at a higher risk of contracting the flu, as well as at higher risk for developing complications from the disease.

If you experience flu symptoms, Grayson recommends staying home from work and other public places to avoid transmitting the disease to others. Wash your hands often and avoid others who are ill.

"Before going to your doctor's office, call," Grayson said. "They may have a different waiting room for those who are sick."

How to protect yourself -- and your child -- from the flu

Getting vaccinated against the flu is the best way to protect against the disease, experts say.

Receiving the vaccine earlier in the season is preferable, because the vaccine takes about two weeks to kick in, but even partial protection against the flu can ward off the worst symptoms and make the duration of the disease less severe.

"It's not too late to get vaccinated," Grayson stressed. "We still have a lot of flu season left."

Guidelines for children are slightly different than they are for adults, according to the CDC. The agency is now recommending that some children between the ages of six months and 8 years old get two doses of the vaccine, spaced at least four weeks apart. The child's doctor or health care provider should determine whether he or she needs a second dose for the best possible protection against the flu.

Despite those recommendations, however, many Americans mistakenly believe that the flu vaccine doesn't work or has side effects. (Apart from soreness at the needle's injection site, there are no notable side effects linked to the flu vaccine.)

In part because of these misconceptions, only half of Americans reported that they planned to get the flu vaccine this year, according to a survey conducted by the National Foundation for Infectious Diseases this summer.