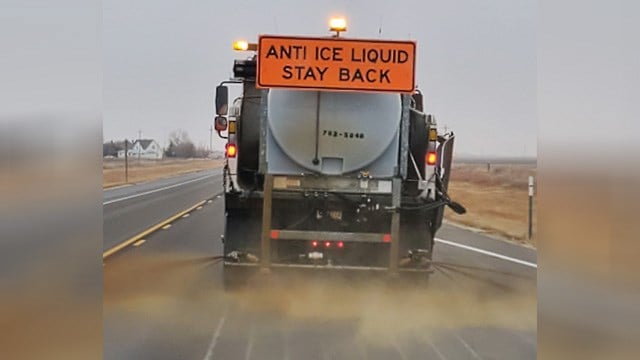 When crews treat Kansas highways for ice, some drivers might notice darker trails on the pavement instead of the usual white ones left by brine. It's beet juice.

The state Department of Transportation says the properties of beet juice, when mixed with brine, allow for the melting agent to be effective at lower temperatures.

Beet juice, which tends to leave a brownish or grayish residue, also allows brine and salt to adhere to pavement longer.

District Engineer Brent Terstriep says another beet-juice benefit is that when beet juice is added to brine, the combination makes ice-fighting more efficient because crews don’t have to drive out as often to apply brine.

KDOT Emergency Coordinator Jim Frye gave this additional explanation of how beet juice works and how it has been used:

KDOT says it began experimenting with the beet juice it uses now during the winter of 2015 in northwest Kansas. Since then, KDOT has made beet juice available at more than 20 locations across the state.