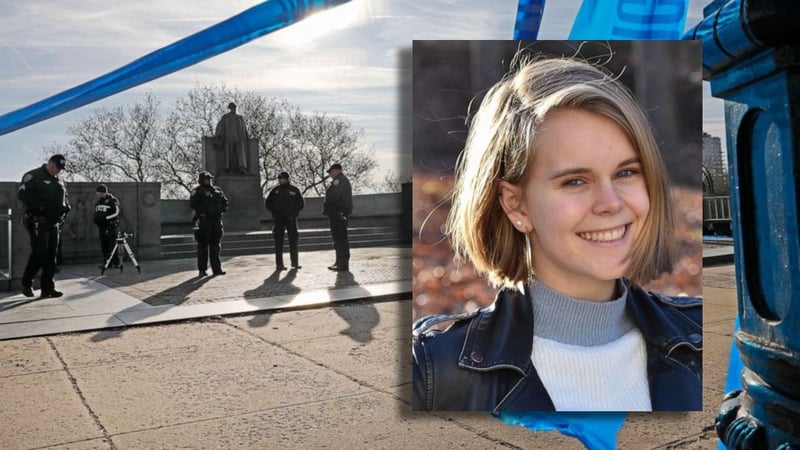 A 14-year-old boy suspected of fatally stabbing a Barnard College freshman in a park near the school’s New York City campus has been found following a two-week manhunt, police said Thursday.

Chief of Detectives Rodney Harrison tweeted that police “have located this individual” but gave no other details.

The teen is one of three youths police believe were involved in the stabbing of 18-year-old Tessa Majors as she walked through Manhattan’s Morningside Park on Dec. 11.

Police tracked him down after taking the unusual step last Friday of releasing photographs of him but not his name or any other identifying information.

A police spokeswoman declined to answer questions about where and how the teen was located, referring back to Harrison’s tweet and saying “the investigation remains active and ongoing.”

Of the two other suspects, only one has been charged.

A 13-year-old boy arrested Dec. 13 and charged as a juvenile with felony murder told detectives he was at the park with the other youths but wasn’t the one who stabbed Majors, police said.

Another juvenile suspect was questioned for several hours, also on Dec. 13, but police let him go, Harrison said. He has declined to say why that boy wasn’t charged.

Majors was stabbed while walking in the park just before 7 p.m., two days before the start of final exams at Barnard, an all-women’s school that is part of the Ivy League’s Columbia University.

She staggered up a flight of stairs to street level and collapsed in a crosswalk.

Her death has troubled city and college leaders, both for its proximity to campus and its apparent randomness.

The suspects’ youth has led to comparisons to the Central Park Five, who were five black and Hispanic teens wrongfully convicted of a 1989 rape.

Some city leaders have urged police to use caution to avoid repeating mistakes made in that case.

Harrison said the youths previously questioned in the Majors case had guardians present and were told of their right to a lawyer. The Legal Aid Society, which represents the first arrested youth, said detectives should have waited until he had a lawyer before questioning him.

The organization has also raised concerns about the track record of one of the detectives in the case, saying Wilfredo Acevedo had been the subject of disciplinary findings and was accused in lawsuits of planting and falsifying evidence, lying in court papers and using excessive force.

Police Commissioner Dermot Shea defended Acevedo, saying in a written statement that he had never been found to have made a single false statement or falsely arrested anyone by the NYPD, the city’s police watchdog agency, courts or prosecutors.

Shea said the Legal Aid Society was “trying to undermine the case” by singling out Acevedo with “calculated, personal attacks.”

Last Friday, a Connecticut man was arrested after police say he posted a Reddit message saying he was going to kill the suspected stabber.

Majors played in a rock band, sported green hair and had told an editor from a newspaper internship in high school that she planned to take journalism classes in college.

She was memorialized Saturday at a private service at her high school in Charlottesville, Virginia. St. Anne’s Head of School David Lourie told mourners that being around Majors left everyone feeling “more optimistic about the future.”