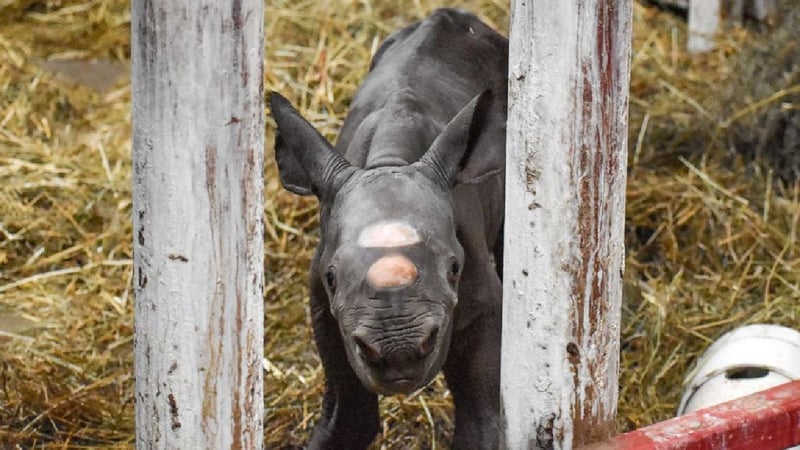 A Christmas miracle was delivered to a Lansing, Michigan, zoo this year.

For this time in the Potter Park Zoo's 100-year history, a black rhino calf was born.

The species is considered critically endangered, with an average of less than two black rhino calves born in human care each year, making each birth "vital," according to the zoo.

In total, there are just over 50 black rhino calves in the care of accredited zoos worldwide and about 5,000 alive in the wild, the zoo said.

"This is a monumental moment for Potter Park Zoo that has taken our staff years of planning and hard work. We are dedicated to conserving rhinos and couldn’t be more excited about this successful black rhino birth," Cynthia Wagner, director of Potter Park Zoo, said in a statement.

Video of the birth on Tuesday showed the mother rhino, a 12-year-old named Doppsee, walking around in the early hours of the morning.

The calf dropped out of her stomach at 5:40 a.m. and about an hour and a half later was standing.

The zoo said the calf appears to be nursing well and frequently. Employees will continue to monitor both mother and baby in the next few weeks.

It is Doppsee's first calf, according to the zoo.

The black rhino population drastically declined in the 20th century due to European hunters and settlers, according to the World Wildlife Fund.

Since 1995, the species made a "tremendous comeback" -- from less than 2,500 black rhinos to some 5,000 -- but it is still considered critically endangered, according to the NGO.

Poaching and black-market trafficking of rhino horns were listed as continuous threats to the population.

"A lot of work remains to bring the numbers up to even a fraction of what it once was -- and to ensure that it stays there," according to the World Wildlife Fund.